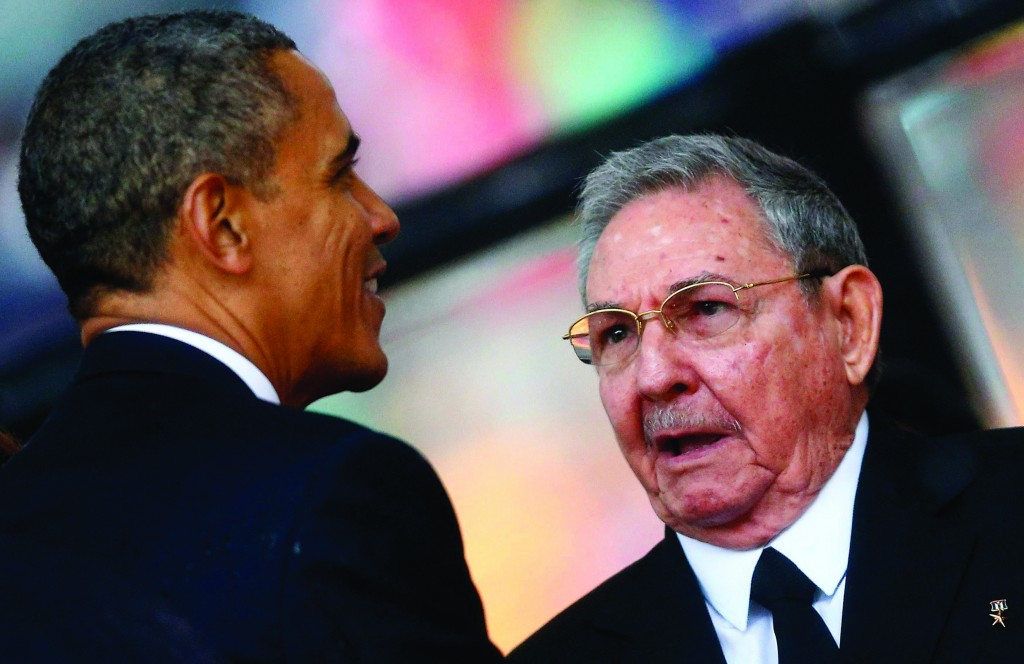 It was the briefest of moments, just seconds, two presidents shaking hands and exchanging pleasantries amid a gaggle of world leaders together to honor the late Nelson Mandela.

It would hardly have been noteworthy, except the men locking hands in Johannesburg were Barack Obama and Raul Castro, whose nations have been mired in Cold War antagonism for more than five decades.

A single, cordial gesture is unlikely to wash away bad blood dating back to the Eisenhower administration. But in a year that has seen both sides take small steps at improving the relationship, the handshake stoked talk of further rapprochement.

“On the one hand, you shouldn’t make too much of this. Relations between Cuba and the United States are not changing tomorrow because they shook hands,” said Geoff Thale, a Cuba analyst at the Washington Office on Latin America, a U.S.-based think tank.

He contrasted the moment to a 2002 development summit where then-Mexican President Vicente Fox asked Fidel Castro to leave to avoid having him in the same room as U.S. President George W. Bush.

“What’s really striking here is the contrast,” Thale said. “It’s a modestly hopeful sign, and it builds on the small steps that they’re taking.”

Not everyone was so happy about it.

“Sometimes a handshake is just a handshake, but when the leader of the free world shakes the bloody hand of a ruthless dictator like Raul Castro, it becomes a propaganda coup for the tyrant,” said Ileana Ros-Lehtinen, a Cuban-American congresswoman from Florida who until January 2013 was chairwoman of the House Committee on Foreign Affairs.

Obama and Castro’s encounter was the first of its kind between sitting U.S. and Cuban presidents since Bill Clinton and Fidel shook hands at the U.N. in 2000.

It came as Obama greeted a line of world leaders on his way to the podium for a speech at the memorial.

In another potentially uneasy exchange, Obama briefly greeted Afghan President Hamid Karzai, whose refusal to sign a security agreement with the U.S. before year’s end has irritated the administration.

Obama adviser Ben Rhodes said the handshakes were not planned in advance and didn’t involve any substantive discussion. “The president didn’t see this as a venue to do business,” he told reporters traveling back to Washington aboard Air Force One.

As president, Obama has lifted limits on how often Cuban-Americans can visit family back on the island, and how much they can send home in remittances. He also reinstated “people-to-people” cultural exchange tours to Cuba. The result is more than a half-million U.S. visitors to the island each year.

But Obama has also argued that Washington’s 51-year economic embargo on Cuba should remain in force, and his administration has imposed tens of millions of dollars in fines on international companies for violating the sanctions.

Cuba’s imprisonment in 2009 of U.S. government development subcontractor Alan Gross put relations back in a deep freeze. Gross remains jailed, but this year, Washington decided it would no longer let the case stand in the way on areas of common interest.

Washington and Havana are still far apart on many issues, among them Gross, four Cuban agents jailed in the United States, the embargo, the U.S. Navy base at Guantanamo and Cuba’s record on human rights and democracy.

But some in Havana were optimistic the handshake may point to a future Cuba-U.S. reboot.

“As a Cuban, I’m shocked,” said Ana Lidia Aguila, a 42-year-old employee of the City Historian’s Office. “I hope that relations grow closer.”