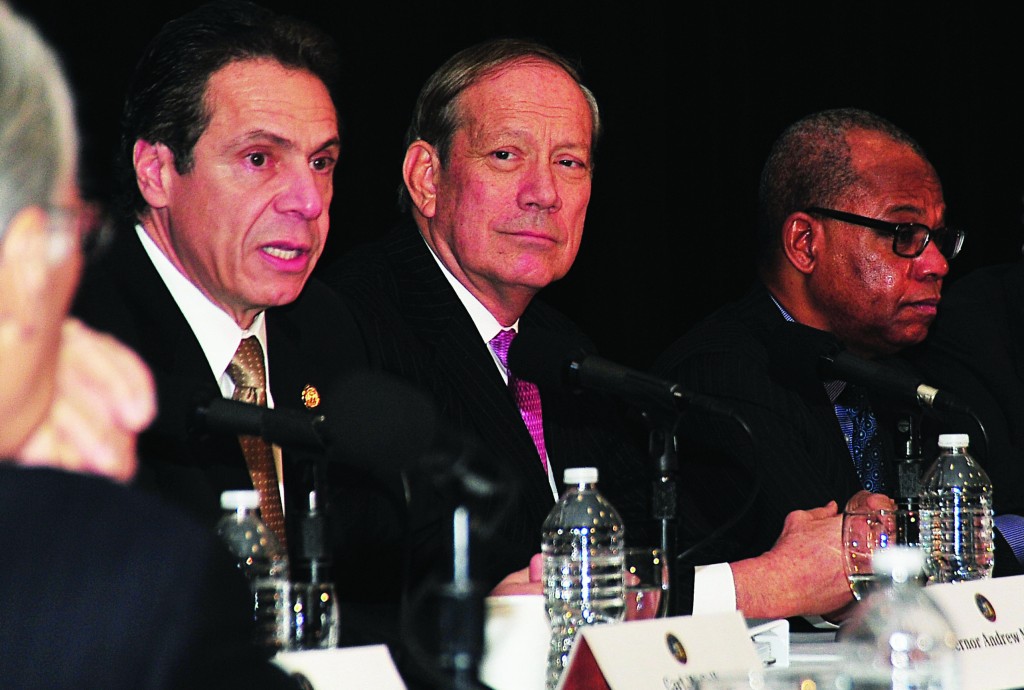 Gov. Andrew Cuomo on Tuesday embraced a proposal for a two-year freeze on what he called crushing local property taxes.

Under the proposal from Cuomo’s tax commission, the state would subsidize the cost of the freeze in 2014 with the first state budget surplus since before the Great Recession. Cuomo credited the surplus to holding state spending increases to under 2 percent during his three years in office.

“It’s good news that we are in a position to, frankly, have this luxury of deciding how to invest this surplus because we did what we had to,” Cuomo said from the commission’s Long Island presentation at the State University of New York at Old Westbury.

The commission recommended $1 billion, about half of the state budget surplus, be used to freeze local property taxes for two years, but only for municipalities and school districts that abided by the state-imposed cap of 2 percent growth in budget spending. In the second year, only municipalities and school districts that took “concrete steps toward finding permanent structure savings” by sharing the cost of services or merging would benefit.

The commission highlighted the need to let a temporary income tax surcharge on New York’s wealthiest residents expire as planned in 2018. Cuomo and the legislature have extended that $2 billion-a-year income tax increase twice after Cuomo and Senate Republicans promised to let it end because it was a “job killer.”

The report further recommended tax breaks for employers and specifically for manufacturers. The commission called for New York to reduce its estate tax, which has long been a goal of former Republican Gov. George Pataki, whom Cuomo chose as co-chairman of the commission. Pataki said cutting the estate tax will encourage small-business owners and farmers to stay in New York without fear that their families will be “clobbered” by the estate tax when businesses are passed on within the family.

Advocates for the poor were concerned the broad freeze for homeowners and tax breaks for employers might not leave funding to help low-income New Yorkers.

Cuomo said he will more carefully review the commission’s proposals and bring them to the legislature. Lawmakers could adopt some or all of the ideas in the session beginning in January, the start of the election year for all statewide officials.

Senate Republican leader Dean Skelos said many of the commission’s recommendations fail to go far enough and that deeper, permanent cuts are needed.

“In order to bring about real job growth and give New Yorkers the tax relief they need to live and stay in New York, the plan must go further,” Skelos said.