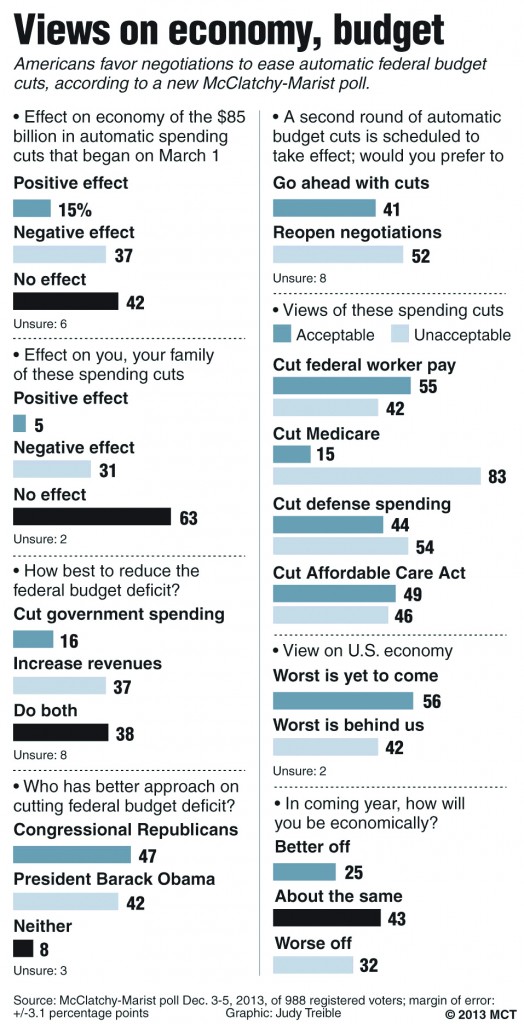 Republican and Democratic negotiators reached out for a budget agreement Tuesday to reduce automatic spending cuts aimed at programs ranging from parks to the Pentagon, risking a backlash from liberals and conservatives that highlighted the difficulty of compromise within divided government.

Officials said that under the emerging agreement, an estimated $65 billion in automatic spending cuts would be restored through the end of the next budget year, which runs to Sept. 30, 2015.

The increases would be offset by a variety of spending reductions and increased fees elsewhere in the budget totaling about $85 billion over a decade, enough for a largely symbolic $20 billion reduction in the nation’s $17 trillion debt.

Among them is a requirement for federal workers to make larger contributions to their own pensions, as well as an increase in a federal security fee that would add $5 to the cost of a typical round-trip flight.

“We’re not there yet but we are working out details and I’m hopeful,” Sen. Patty Murray told reporters at midday as she walked into a meeting with fellow Senate Democrats. The Washington lawmaker, who is is her party’s negotiator in talks with Rep. Paul Ryan, (R-Wis.), said she hoped to be able to announce an agreement by day’s end.

The officials who described the deal under discussion did so on condition of anonymity, saying they were not authorized to speak on the record.

The same was not true of conservative organizations, who attacked the proposal as a betrayal of a hard-won 2011 agreement that reduced government spending and is counted as among the main accomplishments of tea party-aligned Republicans who came to power earlier the same year in the House.

Americans for Prosperity issued a midmorning statement saying that GOP lawmakers should uphold current spending levels. Otherwise, the group said, “Congressional Republicans are joining liberal Democrats in breaking their word to the American people to finally begin reining in government overspending that has left us over $17 trillion in debt.”

A day earlier, Heritage Action issued a similar broadside, saying it could not support a deal that “would increase spending in the near-term for promises of woefully inadequate long-term reductions.” The group played an influential behind-the-scenes role earlier this fall in events that led to a partial government shutdown, supporting a strategy of refusing to provide needed funds for federal programs until the health care law known as “Obamacare” was defunded.

For their part, liberals were unhappy that the deal was likely to lack an extension of benefits for unemployed workers more than 26 weeks off the job.

The party’s leader, Rep. Nancy Pelosi of California, said at one point last week that her rank-and-file would insist on an extension for the unemployment program as a condition for supporting a budget deal.

The White House pointedly refused to support her position, and she later made additional comments that her staff characterized as a clarification.

Given the internal GOP divisions in the House, Speaker John Boehner is likely to need Democratic votes to approve any deal by Ryan and Murray. It was not immediately clear how many Democratic lawmakers would support a plan that lacked an extension of unemployment benefits.

Some Democratic officials suggested a possible two-step solution. It included swift passage of any budget agreement that emerges, and then adding an extension of unemployment benefits to must-pass legislation early next year, perhaps a measure to reverse a looming cut in payments to doctors who treat Medicare patients.

The bipartisan push for a budget agreement stems from automatic cuts that are themselves the consequence of a divided government’s ability to complete a sweeping deficit reduction package in 2011.

If left in place, the reductions would carve $91 billion from the day-to-day budgets of the Pentagon and domestic agencies when compared with spending limits set by the hard-fought 2011 budget agreement.

Support for a deal to ease the reductions is strongest in Congress among defense hawks in both houses and both parties who fear the impact on military readiness from a looming $20 billion cut in Pentagon spending.

The White House wants a deal for the same reason, but also to ease the impact of automatic cuts on domestic programs that range from education to transportation to the national parks.

While an agreement would have very little impact on deficits, it holds the potential for avoiding politically charged budget clashes for the next year or two. The addition of $45 billion in spending for the current fiscal year and another $20 billion for the following budget deal would permit the two houses to agree on levels for annual appropriations bill, easing the threat of veto showdowns of the type that can lead into partial government shutdowns.

Officials said the framework under discussion would raise overall spending on one type of federal program to $1.012 trillion in the current budget year, compared with $967 billion under existing law.

Even though that represents a two-year increase of about $65 billion, it is below the limits envisioned before the across-the-board cuts began taking effect.