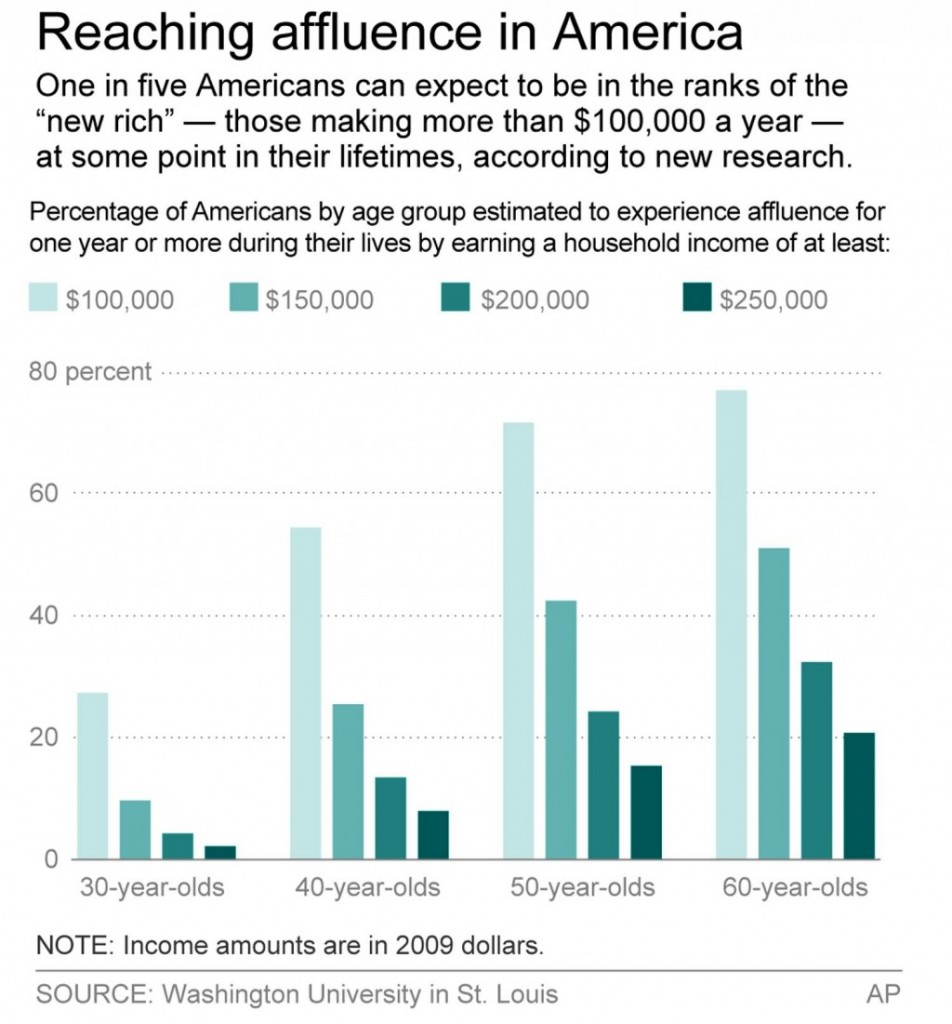 Fully 20 percent of U.S. adults become rich for parts of their lives, wielding extensive influence over America’s economy and politics, according to new survey data.

These “new rich,” made up largely of older professionals, working married couples and more educated singles, are becoming politically influential, and economists say their capacity to spend is key to the U.S. economic recovery. But their rise is also a sign of the nation’s continuing economic polarization.

They extend well beyond the wealthiest 1 percent, a traditional group of super-rich millionaires and billionaires with long-held family assets. The new rich have household income of $250,000 or more at some point during their working lives, putting them — if sometimes temporarily — in the top 2 percent of earners.

The new survey data on the affluent are being published in an upcoming book, and an analysis by The AP-NORC Center for Public Affairs Research provided additional information on the views of the group.

Last week, President Barack Obama asserted that growing inequality is “the defining challenge of our time,” signaling that it will be a major theme for Democrats in next year’s elections.

“In this country, you don’t get anywhere without working hard,” said James Lott, 28, a pharmacist in Renton, Wash., who adds to his six-figure salary by day-trading stocks. The son of Nigerian immigrants, Lott says he was able to get ahead by earning an advanced pharmacy degree. He makes nearly $200,000 a year.

After growing up on food stamps, Lott now splurges occasionally on luxuries. He believes government should play a role in helping the disadvantaged. But he says the poor should be encouraged to support themselves, explaining that his single mother rose out of hardship by starting a day-care business in their home.

The new research suggests that affluent Americans are more numerous than government data depict, encompassing 21 percent of working-age adults for at least a year by the time they turn 60. That proportion has more than doubled since 1979.

Sometimes referred to by marketers as the “mass affluent,” the new rich make up roughly 25 million U.S. households and account for nearly 40 percent of total U.S. consumer spending.

While paychecks shrank for most Americans after the 2007-2009 recession, theirs held steady or edged higher. Once concentrated in the old-money enclaves of the Northeast, the new rich are now spread across the U.S., mostly in bigger cities and their suburbs. They include Washington, D.C.; Boston, Los Angeles, New York, San Francisco and Seattle. By race, whites are three times more likely to reach affluence than nonwhites.