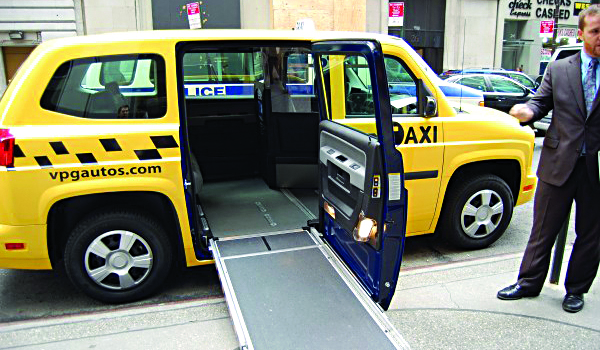 Getting around New York City in a wheelchair has long been an exercise in frustration, but it could become a bit easier after officials announced a legal settlement Friday mandating that at least half the city’s taxi fleet be wheelchair-accessible by 2020.

The details of how to achieve that goal haven’t yet been worked out and taxi owners immediately questioned who was going to shoulder the cost of upgrading the fleet. But the settlement, which resolves a lawsuit brought in 2011, was cheered by advocacy groups for people with disabilities.

Hammering home the challenges, a lead plaintiff in the lawsuit, Edith Prentiss, was 20 minutes late for the news conference announcing the settlement because she couldn’t find a working elevator to free her and her wheelchair from the subway system.

“Personally, I look forward to not having to wheel up and down Broadway in the middle of the night to get to the emergency room because the buses have stopped running,” she said.

The agreement requires the Taxi and Limousine Commission to propose rules that would phase in the new, accessible cabs by attrition. No cars on the road would be required to undergo upgrades, but half of all new vehicles brought into service would be required to accommodate wheelchairs. Alterations can cost as much as $15,000 per cab, though advocates predicted the cost will drop once carmakers see a market for large numbers of accessible vehicles in New York City.

Those details will be left to the administration of mayor-elect Bill de Blasio, who takes office Jan. 1. A spokeswoman for de Blasio, whose campaign was backed financially by taxi fleet owners, said he would review the ruling and remains “committed to a more accessible taxi fleet.”

The Metropolitan Taxicab Board of Trade, which represents 38 taxi fleets with about 5,300 cabs, said it had “more questions than answers” about the settlement.

“Will passengers pay these costs through higher fares?” they wondered in a statement.