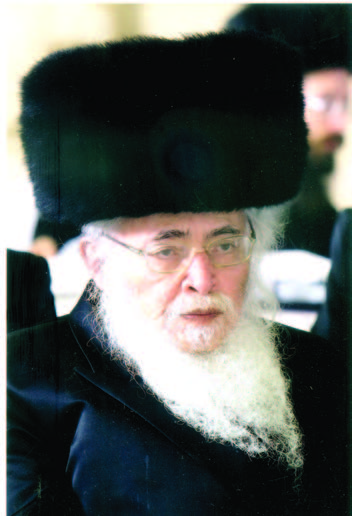 Thousands accompanied  Harav Yitzchak Meir Knobolovitz, zt”l, Rosh Yeshivah of Bais Yisrael in Ashdod, and one of the eminent Chassidim and marbitzei Torah in Gur for the past 50 years, on his final journey on Monday evening in Yerushalayim.

Reb Yitzchak Meir was born in Tel Aviv in Nissan 5696/1936. His parents came to Eretz Yisrael from Poland with the blessing of the Imrei Emes, zy”a.

As a child, he learned in the Lubavitcher cheder in Tel Aviv under Harav Chaim Shaul Brook, zt”l. Reb Yitzchak Meir would say that he received a lot of his emunas chachamim from Reb Chaim Shaul. As a young child, he went with his father to Harav Aharon of Belz, zy”a. It was late on Friday night, and the boy stood at the door of the Rebbe’s room, when suddenly, the Rebbe opened the door and began to ask questions, such as where he learned. Reb Yitzchak Meir’s father and other chassidim came running over from the adjoining beis medrash. The Rebbe asked the boy’s father if he knows how to learn. He replied, “Yehi ratzon, may it be Hashem’s will, that he should know how to learn.” The Rebbe placed his hands on the boy’s head and gave him a long brachah.

Upon reaching bar mitzvah, Reb Yitzchak Meir entered Yeshivas Chiddushei Harim in Tel Aviv, where he was among the top tier of bachurim, learning diligently and making great strides in his yiras Shamayim. In Iyar 5712/1952 he began learning in Sfas Emes in Yerushalayim.

He made great strides in his learning, and was known to think in learning even when he walked in the street. He once traveled to Tel Aviv, and on the bus, learned from a Shulchan Aruch. Beside him sat a Rav from Yerushalayim, and when he saw a bachur from Sfas Emes learning Yoreh Deah he began to speak in learning with him. The Rav saw that he was talking to a tremendous scholar, and went in to the Bais Yisrael and told him about the spiritually uplifting ride he had experienced with a bachur from Sfas Emes.

Reb Yitzchak Meir was a paragon of diligence; he was completely enveloped in his Torah and there was nothing in his life but Torah and halachah. There are fascinating stories about his being so engrossed in his learning that he was oblivious to what was happening around him. He was fully proficient in Shas and Shulchan Aruch.

After his marriage he learned in Kollel Bais Yisrael in Yerushalayim. Then the Bais Yisrael sent him to become a mashgiach in the Gerrer Talmud Torah in the city. He held various Torah and chinuch positions in a number of Gerrer mosdos over the years, until in Elul 5742/1982, he became a Ra”m in Yeshivas Bais Yisrael in Ashdod. For the next 32 years, he was a pillar of the yeshivah. His shiurim were known for his clarity; he would focus on the important points in the sugya, elucidate them clearly and was able to simplify even the deepest concepts. He was determined that every student, even the weaker ones, should excel in their learning and should love learning.

He guided young maggidei shiur, and would give them his own shiurim that he had prepared.

He also influenced the bachurim with his yiras Shamayim, and served as a spiritual guide. He would seek out weaker bachurim and those who needed extra encouragement, and infuse them with a good feeling. He found the positive aspect of every boy, and used it to help the boy improve himself. Many avreichim said that their conversations with him about the purpose of life opened their hearts to ahavas Torah and aspirations to grow.

He authored the sefarim Beiurim Vehearos on masechtos Bava Kama, Bava Metzia, Bava Basra, Pesachim, Nedarim, Gittin and Kiddushin. His sefarim were held in wide acclaim throughout the Torah world. He had just finished the sefer on Kesubos and had begun working on Maseches Sukkah. He excelled at extracting difficult points in the sugya and simplifying them into understandable terms.

Harav Shlomo Zalman Auerbach, zt”l, would say that it was clear that whoever wrote the sefarim knew how to learn and was a great talmid chacham. He was once at a simchah and saw that Reb Yitzchak Meir was also present. In his modesty, Reb Shlomo Zalman said, “I really should have come to you to sit with you but I have no energy, so please, can you come and sit with me?” He added that he learned the sefarim constantly. Harav Ovadiah Yosef, zt”l, was also known to learn the sefarim.

He was a mechadesh until his final day, constantly sitting and writing his chiddushim. He also encouraged others to write down their chiddushim. He did not print sefarim for the profit, but in order to disseminate Torah. He would distribute them for free in batei medrash.

Reb Yitzchak Meir was extremely modest and despised anything that smacked of honor. He had exceptionally refined middos, and a generous heart that was willing to do anything for another Yid.

Last year, he suffered a heart attack and underwent bypass surgery, which resulted in complications. He recently recovered somewhat, and spent long periods of time in the home of his son, Reb Avraham Baruch, of Bnei Brak.

On Sunday, he went into sudden cardiac arrest. He passed away on Monday afternoon in the hospital.

The levayah began at the Shamgar Funeral home, where his oldest son, Reb Aryeh, delivered a brief hesped. It then proceeded to the Gerrer beis medrash on Ralbach Street, where the Gerrer Rebbe, shlita, attended, along with multitudes of his talmidim who came from all over Eretz Yisrael.