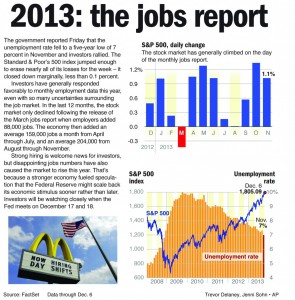 The strengthening job market focused investors on the nation’s improving economy instead of concerns about the Federal Reserve’s stimulus, snapping a five-day losing streak for stocks.

Stocks had been falling this week after a string of positive economic reports made investors worry that the Fed would soon pull back on its $85 billion in monthly bond purchases, which have kept long-term interest rates low and supported the stock market.

Now that hiring is showing consistent strength, investors seem to be letting go of their worry that the economy isn’t ready for the Fed to start weaning the U.S. off that stimulus.

“The jobs report was outstanding,” said Randy Frederick, a director of trading and derivatives at Charles Schwab. “It’s refreshing to see the markets react positively, because we’ve been in a mode for so long of ‘good news is bad news.’”

Stocks jumped at the open and moved higher throughout the day. The Dow Jones industrial average rose by as much as 200 points in early afternoon trading before easing back slightly before the close.

All 10 sectors in the S&P 500 index rose. Industrial stocks and others that tend to rise the most when the economy is growing posted some of the biggest gains. The jobs report showed that manufacturers added 27,000 jobs, the most since March 2012.

“Now we’re getting investors trading more on fundamentals and long-term earnings for next year,” said Mike Serio, regional Chief Investment Officer for Wells Fargo Private Bank. “There may be some backbone to the economy.”

Signs that the recovery is becoming more entrenched may lure more buyers back into the stock market, supporting prices, said JJ Kinahan, chief derivatives strategist at TD Ameritrade. Despite steady gains for the market over the last five years, some investors have remained wary after the collapse of 2008.

“We’re seeing good numbers,” Kinahan said. “Does this encourage people who have been underinvested all year to come in and spend some money on the market?”

Friday’s gains ended a mini-slump for the market in December. Fears of the Fed pulling back on its stimulus had made traders nervous when they saw the slew of good economic reports.

The good-news-is-bad-news attitude has at times stalled the market’s impressive run-up this year.

The S&P 500 index fell 1.5 percent in June when Fed chairman Ben Bernanke said that policy makers could start scaling back stimulus later in the year. In August, the market dipped again, falling 3.1 percent, as bond yields climbed in anticipation of the end of stimulus.

“The Fed has been trying for several months now to get the market to realize that tapering and tightening aren’t the same thing,” said Schwab’s Frederick. “The market is finally realizing that.”

In U.S. government bond trading, the yield on the 10-year Treasury note fell to 2.86 percent, from 2.87 percent Thursday.

The bond market’s muted reaction to the strong jobs report may have been because the Fed was buying debt securities, said Jack Ablin, chief investment officer at BMO Private Bank. The central bank was scheduled to buy between $4.25 billion and $5.25 billion of Treasury notes on Friday, according to its monthly purchasing schedule, Ablin said.

Opinion among analysts is still divided as to when the Fed will start to cut back its purchases. Most believe that policy makers will want to see a longer trend of improving economic data before they start winding down. That makes a move at their next meeting, Dec. 17-18, unlikely.

“Everyone is still looking at the Fed beginning to reduce its bond purchases sometime next year,” said Kate Warne, a research principal at investment adviser Edward Jones. “The data was strong, but it wasn’t strong enough to change anything from yesterday.”

The Fed’s first two meetings next year are in January and March.

This article appeared in print on page 8 of the December 9th, 2013 edition of Hamodia.