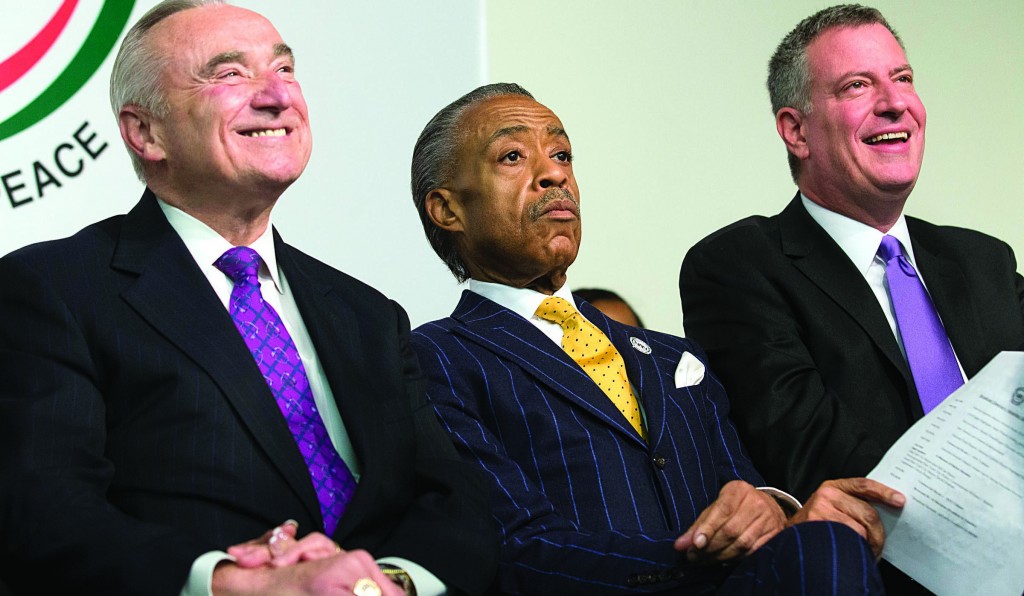 When William Bratton takes over as commissioner of the New York Police Department early next year, he will inherit the country’s most powerful local counterterrorism force, but one that has alienated the city’s large Muslim community.

“We need to heal some of the wounds, reopen the communications and the partnership,” Bill de Blasio, the Democratic mayor-elect, said Thursday while introducing Bratton, 66, as the next police commissioner.

Bratton will have his hands full in his role of healer-in-chief as he reassures New York’s Muslim community and other minorities that they will not be racially profiled.

The next commissioner said there are people in the city who “feel that … there has been unnecessary intrusion into their lives.”

But Bratton, who first served as the NYPD’s top cop from 1994 to 1996 under Mayor Rudolph Giuliani, a Republican, could find himself fending off attacks from some politicians if he makes any substantial changes in how the NYPD combats terrorism.

One of them, Rep. Peter King (R-N.Y.), has vigorously defended the leadership of current Commissioner Ray Kelly and his approach to fighting terrorism.

In 2003 under Kelly, the NYPD launched an aggressive campaign to infiltrate certain ethnic communities in the city’s five boroughs and map where Muslims live, work, eat and pray.

To accomplish this, Kelly created what was known as the Demographics Unit. The secretive unit used plainclothes officers of Arab or South Asian descent to spy on Muslims and record summaries of conversations, all without any evidence of criminal activity.

While being deposed last year in a long-running civil lawsuit, a top NYPD officer acknowledged that the unit, by then renamed the Zone Assessment Unit, had not generated any terrorism leads since its creation but was still compiling several reports a day on residents.

The program has generated some deep suspicion among Muslims in the city and has been challenged in federal court.

Muslims in New York say they have reason to be hopeful that Bratton will change course while still protecting the country’s top terrorism target. As chief of the Los Angeles police, Bratton came to reject the idea of mapping.

De Blasio said he spoke to people about Bratton’s time in Los Angeles and came away impressed with the job he did there.

“He managed in L.A. to deepen the respect and relationship between the police and a number of communities, including the Muslim community,” de Blasio said.

De Blasio has pledged to review the activities of the NYPD’s Intelligence Division, which oversees the Zone Assessment Unit, among other controversial programs.

Linda Sarsour, a prominent Arab American activist and a critic of the NYPD’s surveillance of Muslims, said she’s in a wait-and-see mode. She noted that Bratton jettisoned the Muslim mapping initiative in Los Angeles only after objections from the community. She said she will be meeting with Bratton in the coming weeks.

“We are treading carefully, and we’re looking to him to make sure that our police force doesn’t violate the civil rights of any community in New York City and that he shares the public-safety vision of de Blasio,” she said.

Bratton will also have another important relationship to manage. The NYPD often clashed with the FBI, which is in charge of investigating domestic terrorism. In particular, there were tensions between the bureau and the NYPD’s Intelligence Division, which is managed by David Cohen, a former senior CIA officer.

Federal officials accused Cohen, who is expected to retire, of not keeping the bureau informed about what his division was doing.

Bratton appeared to signal that the days of bickering with the federal government are ending. As part of his management plan, Bratton said he intends to foster “a collaborative relationship with all of the various other agencies that are responsible for the issue of terrorism.”

George Venizelos, assistant director of the FBI’s New York office, said in a statement: “The FBI has long valued the relationship with the New York City Police Department and Commissioner Kelly. We look forward to continuing that strong partnership under Commissioner Bratton’s leadership.”