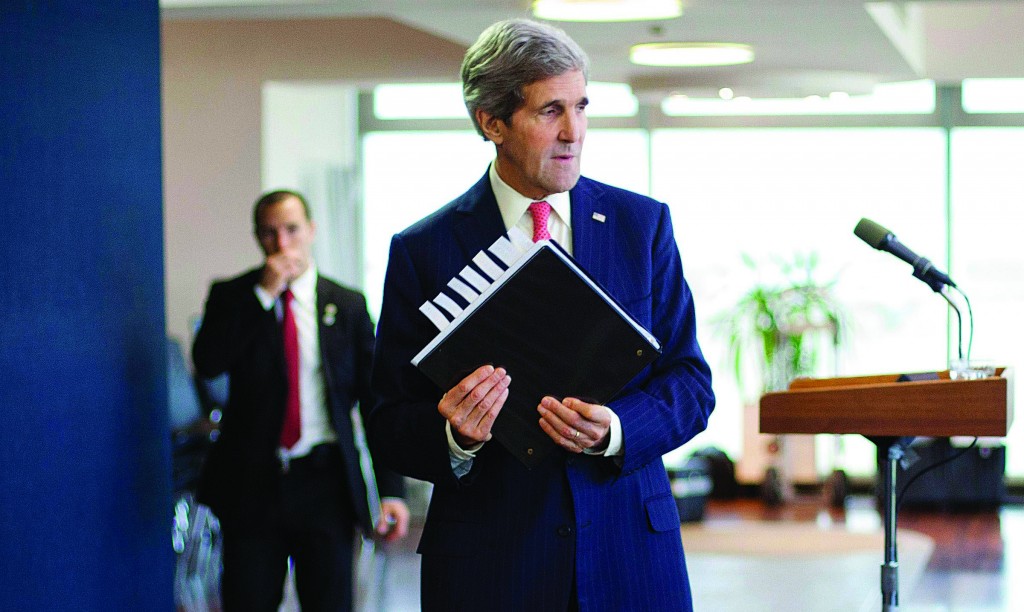 As he departed from Ben Gurion airport after a three-day visit, U.S. Secretary of State John Kerry said on Friday that Israel and the Palestinians are closer than ever to a peace agreement, though he could show no evidence of it, other than smiles and friendly rhetoric.

“I believe we are closer than we have been for years to bringing about the peace and prosperity and the security that all people in this region deserve and yearn for,” he said at the end of his eighth visit to the region as secretary of state.

Talks are at the half-way point of a nine-month time-frame since resuming in July, and officials on both sides have been saying there is little hope for any agreement in the foreseeable future.

Mohammed Ishtayeh, a former negotiator for the Palestinians, said he resigned last month after concluding that the gaps would never be bridged.

“I found no partner in Israel in the talks and the Israelis are not serious. They came to talk just to avoid the international pressure and isolation,” he told The Associated Press. “All Israel wanted from these talks is to maintain the status quo.”

Prime Minister Binyamin Netanyahu, for his part, called on the Palestinians to stop trying to win points in the media by blaming the Israelis for the negotiations impasse.

“We don’t need artificial crises. I think we don’t need finger pointing either. What we need is not grandstanding, but understanding and agreements and that requires hard and serious hard work,” Netanyahu said during a joint press conference with Kerry.

Before leaving, Kerry invoked the memory of Nelson Mandela, who died on Thursday. Kerry quoted Mandela as having said, in the face of challenges, that “it always seems impossible until it is done.”

Mandela’s legacy for the Middle East was not necessarily encouraging from the Israeli point of view, however. Mandela was a supporter of the Palestinians who had compared Israeli policies to apartheid in South Africa. He said of the arch-terrorist Yasser Arafat that he “was one of the outstanding freedom fighters of his generation … It is with great sadness that one notes that his and his people’s dream of a Palestinian state had not been realized,” he said in 1999 during a visit to the region.

PA President Mahmoud Abbas eulogized Mandela as a “symbol of freedom from colonialism and occupation.”

Iran’s parliament speaker Ali Larijani dusted off the apartheid slur and predicted the Palestinians would achieve victory through “resistance,” as Mandela had done.

Netanyahu and President Shimon Peres praised Mandela as “a fighter for human rights” and a “man of vision and a freedom fighter who disavowed violence.”

Over the weekend, President Barack Obama voiced some optimism about the talks: “I think it is possible over the next several months to arrive at a framework that does not address every single detail but gets us to a point where everybody recognizes [it’s] better to move forward than move backwards.

Obama said the outlines of a potential peace agreement were clear and he left the door open for a pact that excluded the Gaza Strip, controlled by Hamas.

“If there is a model where young Palestinians in Gaza are looking and seeing that in
the [Palestinian Authority], Palestinians are able to live in dignity … that’s something that the young people of Gaza are going to want,” Obama said.

Later on Sunday, Finance Minister Yair Lapid publicly prodded Netanyahu to move ahead in the negotiations.

“We must make every effort in order to reach an agreement since the current state jeopardizes the future of the State of Israel… even if developments in the peace negotiations necessitate a coalition realignment of one kind or another.”

The view from the other side of the coalition was articulated by Defense Minister Moshe Yaalon, who told a business conference in Tel Aviv that, “As someone who supported [the] Oslo [Peace Process], I’m learning that on the other side we have no partner for two states for two people.”

“There is no one on the other side…that is prepared to recognize our right to exist as a nation-state for the Jewish nation, and to recognize an agreement as the end of the conflict and the end to demands. We won’t talk about an inch, about a millimeter of territory, if we don’t see that we have a partner who talks about recognition, about the end of the conflict, and about giving up the right of return. We will not implement the doctrine of stages,” he said.