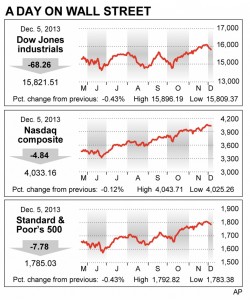 The outlook for hiring is improving and the economy is growing at its fastest pace in more than a year, so what’s the bad news for the stock market?

Stocks fell Thursday after the government reported that the number of Americans applying for unemployment benefits dropped to the lowest in nearly six years last week. Also, the U.S. economy grew at a 3.6 percent annual rate from July through September, the fastest since early 2012.

Investors believe the encouraging signs on the economy will push the Federal Reserve closer to pulling back on its $85 billion-a-month bond-buying program. That stimulus, which is intended to hold down interest rates, has been helping to power this year’s record-setting run in the stock market.

The Standard & Poor’s 500 index dropped for the fifth time in a row, matching its longest losing streak since September.

“If they do cut the bond purchases, the knee-jerk reaction for the market will be to move down,” said Chris Gaffney, a senior market strategist at EverBank.

Earlier in the week, there were strong reports on manufacturing and construction. Investors will get more insight into how the U.S. economy is doing on Friday, when the government releases its monthly jobs report.

While few investors think that the Fed will announce a reduction to its bond purchases at its meeting this month, many believe policy makers could make the move in March.

Several retailers fell after reporting disappointing results. L Brands, the owner of Victoria’s Secret, Bath & Body Works and other stores, lost $1.07, or 1.7 percent, to $62.18 after reporting that its sales dropped 5 percent last month.

Gaming company Electronic Arts was the biggest decliner in the S&P 500 index after Forbes reported that the company had been forced to delay future games from one of its developers due to ongoing problems with its Battlefield 4 game. The company’s stock fell $1.33, or 6 percent, to $21.01.

The S&P 500 index has dipped 1.2 percent since the start of the month and is on course to log its first weekly decline in nine weeks. The loss has pared this year’s advance to 25.2 percent.

Stocks have been surging this year as the Fed’s stimulus helped keep the economic recovery on track and as corporations produced record profits. Low interest rates have also made stocks more attractive in comparison to bonds.

The stock market may also be sliding this month as investors sell some of their best-performing holdings given the strong returns this year, said Natalie Trunow, chief investment officer at Calvert Investments, an asset management company.

“I just don’t know if folks will try to squeeze another percentage point [out of the market], or just sell and go home,” said Trunow.

In government bond trading, the yield on the 10-year Treasury note rose to 2.87 percent from 2.83 percent Wednesday. The yield is the highest it’s been in more than two months as traders expect the Fed to reduce its bond purchases.

This article appeared in print on page 8 of the December 6th, 2013 edition of Hamodia.