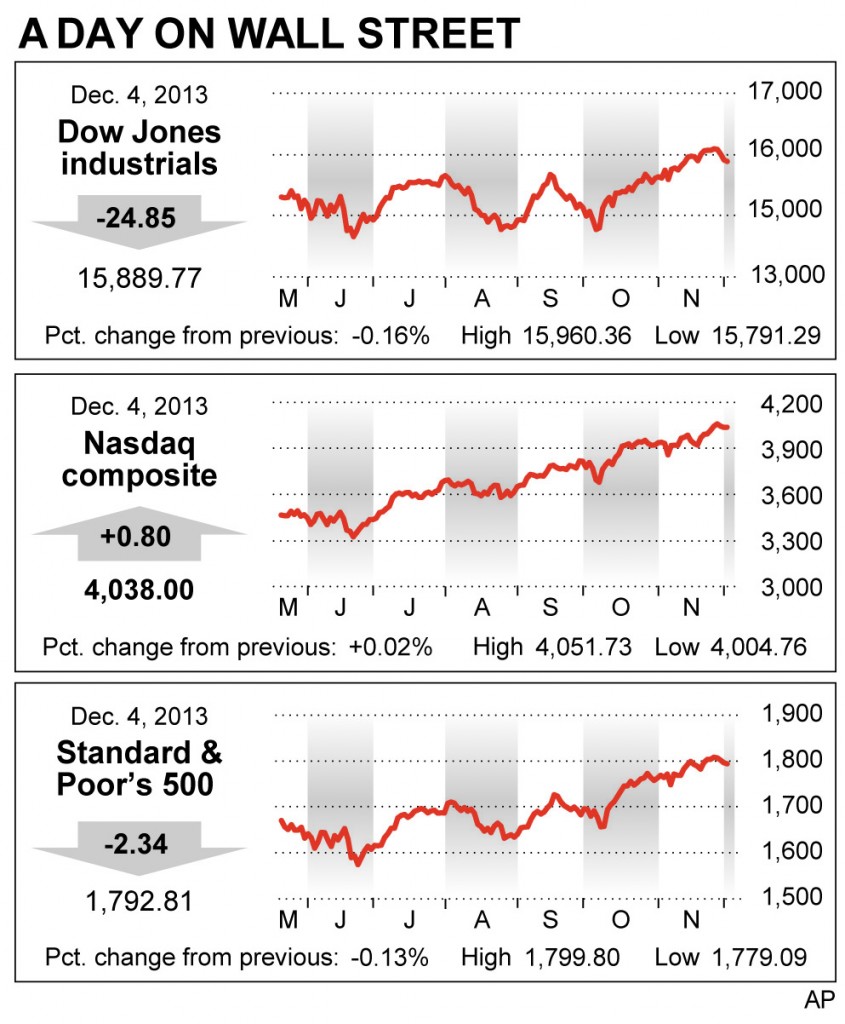 The stock market continued its sluggish start to the month on Wednesday.

The market was lower in early trading after a payroll company reported that U.S. businesses added the most jobs in a year last month as manufacturing and construction expanded. Investors worried that this latest sign of economic expansion could mean that the Fed will pull back on its stimulus sooner than previously expected.

Indexes reversed course in mid-morning trading after another survey showed weakness in the U.S. service sector last month. The Institute for Supply Management said its service-sector index fell to the lowest level since June, indicating that cautious spending by consumers and businesses may be slowing growth.

The latest bout of investor anxiety about the Fed’s plans for its stimulus program comes ahead of the government’s closely watched monthly employment report due out on Friday. The Fed’s $85 billion in monthly bond purchases have been supporting financial markets and giving investors an incentive to buy stocks by making bonds seem relatively expensive. The Fed’s program is aimed at supporting the economy by keeping long-term interest rates very low to encourage borrowing and hiring.

Sears was among the biggest losers on Wednesday.

The stock fell $4.63, or 8.3 percent, to $50.92 after the company’s CEO, the billionaire hedge-fund manager Eddie Lampert, who is also chairman and chief executive of Sears, reduced his stake in the department store chain to less than half.

CF Industries was the biggest gainer in the Standard & Poor’s 500 index, surging $22.88, or 10.7 percent, to $237.07 after the fertilizer company told investors that it was evaluating whether to increase its dividends over time and said it expected to have “significant” additional cash to give to shareholders.

As stocks slumped, the yield on the 10-year Treasury note rose to its highest level in more than two months.

The yield on the 10-year note climbed to 2.84 percent from 2.78 percent on Tuesday, resuming its upward trajectory on signs that the economy is maintaining its recovery. In September the yield climbed as high as 3 percent amid speculation that the Fed was set to announce that it would cut back on its economic stimulus.

Investors are following Treasury rates closely because they are used as a benchmark for setting many kinds of borrowing rates, such as those on mortgages.

However, it will be the speed at which interest rates climb, rather than the absolute level that they reach, that will be crucial for the economy and the stock market, said Quincy Krosby, a market strategist at Prudential Financial.

“Markets can get used to a gradual move,” said Krosby.

The stock market has had an outstanding year. The Dow Jones industrial average and the S&P 500 index have climbed to record levels. The only two months when the stock market declined both occurred when investors thought the Fed was poised to ease back on its stimulus.

While higher rates will push up borrowing costs, stock investors should welcome the end of stimulus because it shows the economy is strengthening, said Doug Cote, chief market strategist at ING Investment Management.

“Ultimately, it’s a good thing,” said Cote. “It means the economy is standing on its own two feet.”