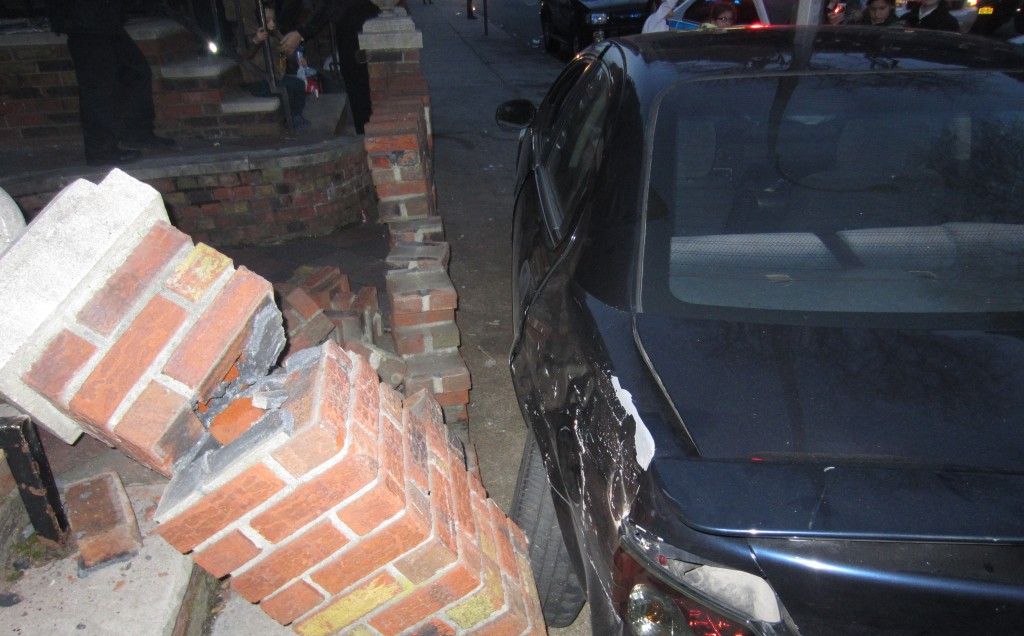 A car being chased by a police cruiser down a quiet street in Boro Park ended in a forceful crash, shaking up residents Wednesday afternoon as mothers waited for their children to be dropped off at the exact spot that the car made impact.

The driver of the black Dodge ran over a policeman’s foot, starting the chase that ended on Ft. Hamilton Parkway and 50th Street. The driver hit a pole and continued driving, crashing into a brick staircase support. The car finally stopped as it crashed into a light pole. A neighbor says that the car’s speed was evident in the pole’s excessive shaking after it absorbed the brunt of the car crash.

The driver was arrested when bags of illegal substances were discovered in his trunk, and he was taken to the hospital.

Neighbors were left in shock since there were mothers waiting for their preschool children to be brought home at the time. Nobody was injured, although a 3-year-old child watching the car barrel toward him ran up to his house, saving himself with just moments to spare.

Rebbetzin Sheindy Kleinman, a well-known lecturer who lives on that block, told Hamodia that she credits a Tehillim group she set up in her home with protecting the hordes of children who normally would be congregated in the area of the crash.

“I made up to finish it every week for a specific purpose — for the safety and protection of the people on the block,” she said.

The group started exactly 14 years ago — on Chanukah of 1999. The woman whose house was crashed into, Mrs. Leah Frankel, committed herself to say 10 of the 24 Tehillim booklets.