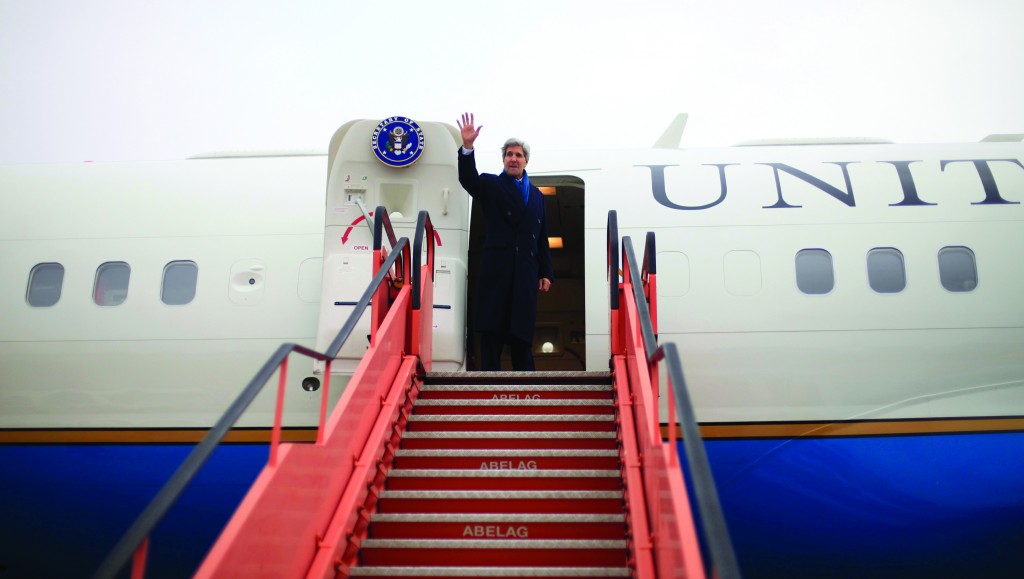 Palestinians Call For Sanctions on Israel

U.S. officials say Secretary of State John Kerry will present the outlines of a proposal to break the deadlock in the peace talks in meetings with Israeli and Palestinian leaders this week.

The proposal will mark the first time that Kerry, who arrived in Israel Wednesday, has directly intervened in the talks that began in late July. By all accounts, the negotiations have made no progress, despite an April target date for reaching a deal.

Officials say Kerry has been working on security issues. Talks have so far focused on Israeli security concerns and border arrangements between Israel and a future Palestinian state.

“The last negotiations meeting took place on November 5 — there have been communications with the Israeli side since then, but I couldn’t call them negotiations,” said Palestinian negotiator Saeb Erekat.

Officials from both sides have said that the American sponsors of the talks may soon present a “bridging proposal” to bring the two sides closer together, although Erekat said he doubted that would happen on Thursday.

Meanwhile in Ramallah, senior Palestinians say the diplomatic pressure that produced the nuclear deal with Iran — world powers negotiating jointly in Geneva and wielding the stick of sanctions — should now be applied to the Israeli-Palestinian conflict.

“What happened in Geneva is a model that proves that if the world wants something, then it can achieve it,” said Erekat. “If they want to achieve peace and stability, then the [Israeli] occupation is no less dangerous than nuclear weapons.”

Others around Palestinian Authority President Mahmoud Abbas have made the same point in recent days, though Abbas himself has not spoken on the matter. He says he’ll keep his promise to the U.S. to stay in bilateral talks with Israel throughout a nine-month period that ends in April.

Any effort to change the format will meet resistance.

Israel strongly opposes the idea of “internationalizing” the negotiations, and U.S. officials have traditionally been cool to the idea of bringing in other mediators, arguing that only Washington has the necessary leverage and influence with both sides.

“We’re less than halfway through the nine-month timeline,” State Department spokeswoman Jen Psaki said Monday. “So our focus remains on the direct negotiations, and I don’t think we’re, at this point, speculating on a different alternative forum.”

Meanwhile, the threat of the European Union replacing its carrot with a stick grew more ominous this week, amid reports late Tuesday that half of the EU member states — 14 out of 28 — have swung their support to labeling products from over the Green Line.

A senior European official told Israeli reporters in Brussels that a breakdown of the peace talks would have consequences for the Palestinians as well, possibly bringing about a halt to its financial assistance to the Palestinian Authority.

Also on Wednesday, former Shin Bet director Yuval Diskin made his contribution to the increasing anxiety over the peace talks, proclaiming that if they fail it would pose a graver existential threat to Israel than the Iranian nuclear program.

Speaking at a conference marking a decade since the Geneva Initiative, Diskin said the sanctity of human life should take precedence over the sanctity of the land, and called for a halt in construction in Yehudah and Shomron and in eastern Yerushalayim.

Diskin was against an escalation in Arab violence.

“In light of the increasing trickle of terror attacks in recent months, the scenario in which the Palestinians take to the streets is likely,” he warned. “This is what has been happening around the world; it would be a grave mistake to think it won’t happen here as well.”

The Geneva Initiative, an unofficial, non-binding document written by a joint Israeli-Palestinian conference, was based on a combination of official negotiations, international resolutions, the Quartet Roadmap, the Clinton Parameters and the Arab Peace Initiative.