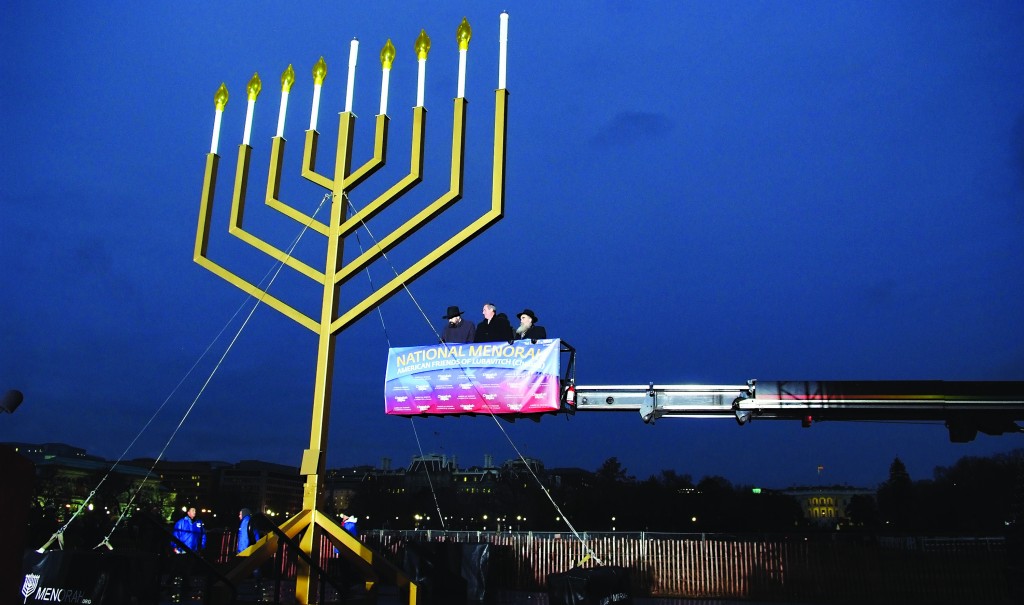 Rabbi Levi Shemtov is the executive vice president of American Friends of Lubavitch (AFLDC) and director of its offices in Washington, D.C. Every year, Washington D.C. is home to several festive Chanukah celebrations coordinated by AFLDC, and this year, says Rabbi Shemtov, the festivities were unprecedented.

On Wednesday, November 27, the first night of Chanukah, there was a candle-lighting ceremony on the front lawn of the White House. Although the weather left much to be desired, over 1,000 people attended and according to a media reporting service, was viewed worldwide by almost 70 million viewers.

Representing the White House was U.S. Trade Representative Michael Froman. In a statement that was read aloud to all those in attendance, President Obama wished everyone a happy holiday and called Israel the historic homeland of the Jewish people.  Following the candle-lighting, there was music and dancing accompanied by a 50-piece air force band and three world-famous chazzanim.

On Monday, four different menorah-lighting events were held at local area universities, including, for the first time, Gallaudet University, a federally chartered national university for the education of the deaf. Gallaudet President T. Alan Hurwitz and Provost Stephen F. Weiner assisted in the menorah lighting,
which was led by Rabbi Yehoshua Soudakoff.

On Tuesday, there was a reception on Capitol Hill, during which New York U.S. Representative Jerold Nadler lit the menorah as Chairman U.S. House Committee on Foreign Affairs Ed Royce looked on. And on Wednesday, a gala event, replete with latkes and donuts, was co-hosted by the World Bank, the Inter-American Development Bank, and the International Monetary Fund.

The AFLDC prepared thousands of Chanukah kits to distribute, said Rabbi Shemtov, containing menoros and lighting guides, and following this past week of festivities, there are perhaps 50 left; even though there are still two events planned for today at the White House. Countless hours were put in late last night to kasher hundreds of silverware, trays, and other items to be used at the event.

“At its core, the main idea of Chanukah is to bring its message — our belief in and proclamation of the nes, the miracle, to the greatest possible audience,” said Rabbi Shemtov. “This is one mitzvah we are only yotzei if there is publicity. I have personally had an affinity for Chanukah since I was a child, but my work today involves, I hope, being mekayem this mitzvah in a way that is mehadrin min hamehadrin.”