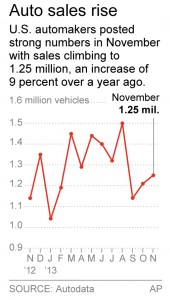 Americans proved last month that they’re head over heels about small sport utility vehicles. November auto sales rose 9 percent above a year ago, with a solid piece of the gains coming over the Thanksgiving weekend. Sales ran at an annual pace of 16.4 million cars and trucks last month, the best in almost seven years.

The numbers gave further evidence that the small SUV is replacing the car as the vehicle of choice for families and aging baby boomers.

Compact SUVs like the Toyota RAV4 and Honda CR-V now make up 15.5 percent of U.S. sales. Through November, Americans bought just over 1.8 million of them, a 21 percent increase from a year ago.

“The compact SUVs are the perfect functional family vehicle of today,” said Jesse Toprak, senior analyst for the TrueCar.com auto pricing website. “They provide a lot of car for your money (and) better gas mileage than larger SUVS. They actually are fashionable nowadays.”

Toyota said more than 25 percent of its sales came over the Thanksgiving weekend. General Motors said Black Friday is “obviously becoming a bigger go-to-market strategy in automotive, a little more consistent with other industries.”

“Black Friday did give us a lift,” said Bill Perkins, president of two Chevrolet dealerships in the Detroit suburbs of Taylor and Eastpointe, Mich.

Americans’ willingness to spend on big-ticket items such as automobiles, even with the deals, could indicate that conditions are improving for consumers.

“The economy is creating jobs and household wealth,” said Kurt McNeil, GM’s U.S. sales chief. “Energy costs are dropping, and credit is available and affordable. All of this bodes well for future growth.”

The future looks especially promising for the small SUV category.

The CR-V led the segment with 23,509 sold, up 5 percent to set a second-straight monthly record. RAV4 sales rose 57 percent to 19,447. The all-new Jeep Cherokee sizzled, topping 10,000 in sales during its first full month on the market.

“If deals are to be had, that’s the segment to look at,” said Jeff Schuster, senior vice president of auto sales forecasting for LMC Automotive. “There are some models that are starting to age.”

Heated competition in the midsize-car segment helped to bring the average automobile sales price down in November for the first time in three years, according to TrueCar. The average last month was $30,634, just under 1 percent lower than a year ago. Incentives such as rebates and low-interest loans rose 0.7 percent, to an average of $2,507 per car.

The Cherokee helped boost Chrysler’s sales by a surprising 16 percent in November, to lead all major automakers. General Motors posted a 14 percent gain, Nissan rose 11 percent, and Toyota was up 10 percent. Ford notched a 7 percent gain and Hyundai sales rose just under 5 percent. Of major automakers, only Volkswagen and Honda reported sales drops. VW brand sales were down 16 percent, while Honda sales were off less than 1 percent.

The Cherokee’s success followed months of delays as engineers tinkered with its transmission. It also endured months of criticism from Jeep enthusiasts.

The Cherokee’s sculpted look wasn’t traditional enough for Jeep purists. But Schuster says the styling appears to have paid off. “I think maybe the purists are losing out to the masses here, at least initially,” he said. “There’s plenty about the vehicle that appeals to a general consumer.”

Last month’s overall sales of 1.25 million cars and trucks came in stronger than many analysts had predicted. Many automakers reported their best November in at least six years.

The strong November points to continued growth in December and into next year, said Schuster. He expects 2013 to end with sales of around 15.6 million, rising 3 percent to 16.1 million next year. That’s almost back to pre-recession levels and far above the recent low of 10.4 million in 2009.