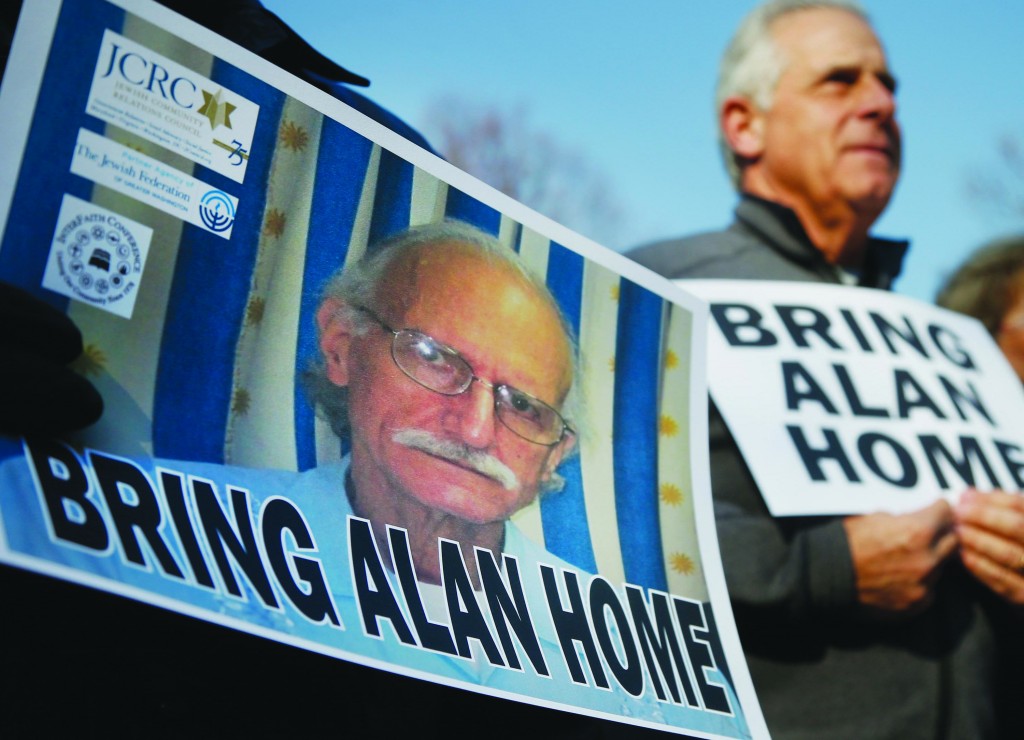 An American man who is marking four years in prison in Cuba has written a letter to President Obama asking the president to get personally involved in securing his release.

Alan Gross, who is Jewish, was arrested four years ago Tuesday while working covertly in the communist-run country to set up internet access for the island’s small Jewish community, access that bypassed local restrictions. At the time, he was working as a subcontractor for the U.S. government’s U.S. Agency for International Development, which works to promote democracy on the island.

Cuba considers USAID’s programs illegal attempts by the U.S. to undermine its government.

Gross was tried and sentenced to 15 years in prison. His case has become a sticking point in improving ties between the countries, which have not had formal diplomatic relations since 1961.

“It is clear to me, Mr. President, that only with your personal involvement can my release be secured,” Gross wrote in a letter made public through a spokeswoman.

Gross, 64, says he has “lost almost everything” over the past four years and that his family “has suffered tremendously.” He says he spends 23 hours a day in a small prison cell with two other inmates, but Gross says he’s asked his two daughters not to visit because he “cannot bear them seeing me like this.” He has lost weight and suffers from arthritis. He says he is “completely isolated from the outside world” except for a few calls and visitors.

“With the utmost respect, Mr. President, I fear that my government — the very government I was serving when I began this nightmare — has abandoned me. Officials in your administration have expressed sympathy and called for my unconditional release, and I very much appreciate that. But it has not brought me home,” he wrote.

Gross isn’t the only one urging Obama to get involved. In late November, 66 senators led by Sen. Patrick Leahy (D-Vt.) sent Obama a letter asking him to “act expeditiously to take whatever steps are in the national interest” to obtain Gross’ release.

White House press secretary Jay Carney on Tuesday called upon the Cuban government to release Gross and said that Obama has “personally engaged foreign leaders and other international figures to use their influence with Cuba to promote” his release.

Gross’ wife Judy, who lives in Washington, held a rally Tuesday in front of the White House. She urged the president to “do whatever it takes to bring Alan home.”

Cuba has previously expressed a willingness to release Gross if the United States makes a similar gesture involving the so-called Cuban Five, intelligence agents who were sentenced to long jail terms in the United States in 2001. One of the men was released from in 2011 and was allowed to return to Cuba this year. A second is scheduled for release in February.

The State Department in a statement Monday called on Cuba to release Gross “immediately and unconditionally.” But Judy Gross said Tuesday that she believes the U.S. government should negotiate to bring her husband home. She said she does not know what the Cuban government wants in exchange.

Over the past year, U.S. and Cuban officials have made some progress on repairing their relationship. Representatives of both countries met twice this year for renewed talks on re-establishing direct mail service, 50 years after it was stopped amid Cold War tensions. The two countries also resumed talks this year about migration issues. Both sets of talks had been on hold since Gross’ arrest.