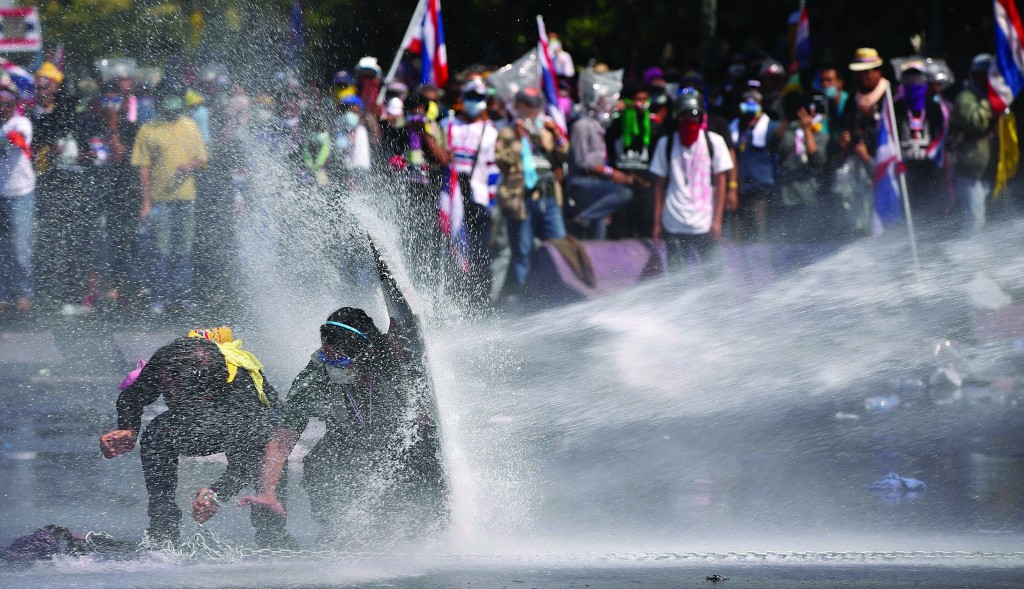 A firebrand opposition leader vowed Monday to escalate his campaign to topple Thailand’s government, and ordered his followers to storm Bangkok’s police headquarters after they fought all day with riot police protecting heavily barricaded key buildings.

Earlier Monday, Prime Minister Yingluck Shinawatra said she is willing to do anything it takes to end the violent protests but made it clear she cannot accept the opposition’s demand to hand power to an unelected council. Yingluck was elected with an overwhelming majority in 2011, and many observers see the protesters’ demand as unreasonable if not outlandish.

“Right now we don’t see any way to resolve the problem under the constitution,” she said in the brief 12-minute news conference.

Yingluck’s comments highlighted the unusual political deadlock Thailand finds itself in with no clear solution in sight. The standoff intensified as protest leader Suthep Thaugsuban gave a defiant speech late Monday to thousands of cheering supporters at a government complex they seized last week when the anti-government demonstrations started.

The protests have renewed fears of prolonged instability in Southeast Asia’s second-biggest economy and come just ahead of the peak year-end tourist season.

Even if Yingluck dissolves parliament and calls fresh elections, Suthep said, he will “continue the fight … because they can always come back to suck the blood of people, steal from people, disrespect the constitution and make us their slaves.”

“If people are happy with elections and go home, I will remain here alone,” he said.

Earlier Monday, protesters commandeered garbage trucks and bulldozers, and tried to ram concrete barriers at the Government House and other key offices. Police repelled them by firing tear gas, water cannons and rubber bullets, as protesters shot back explosives from homemade rocket launchers.

At least three people were killed and more than 200 injured in the past three days of violence, which capped a week of massive street rallies that drew crowds of more than 100,000 at their peak. A Bangkok hospital confirmed that two of the people they treated Monday had suffered gunshot wounds, but it is not clear who shot them. The police say they have not used live rounds.

The protesters, who are mostly middle-class Bangkok supporters of the opposition Democrat Party, accuse Yingluck of being a proxy for her brother, former Prime Minister Thaksin Shinawatra. He was deposed in a 2006 military coup but remains central to Thailand’s political crisis, and is a focal point for the protester’s hatred.