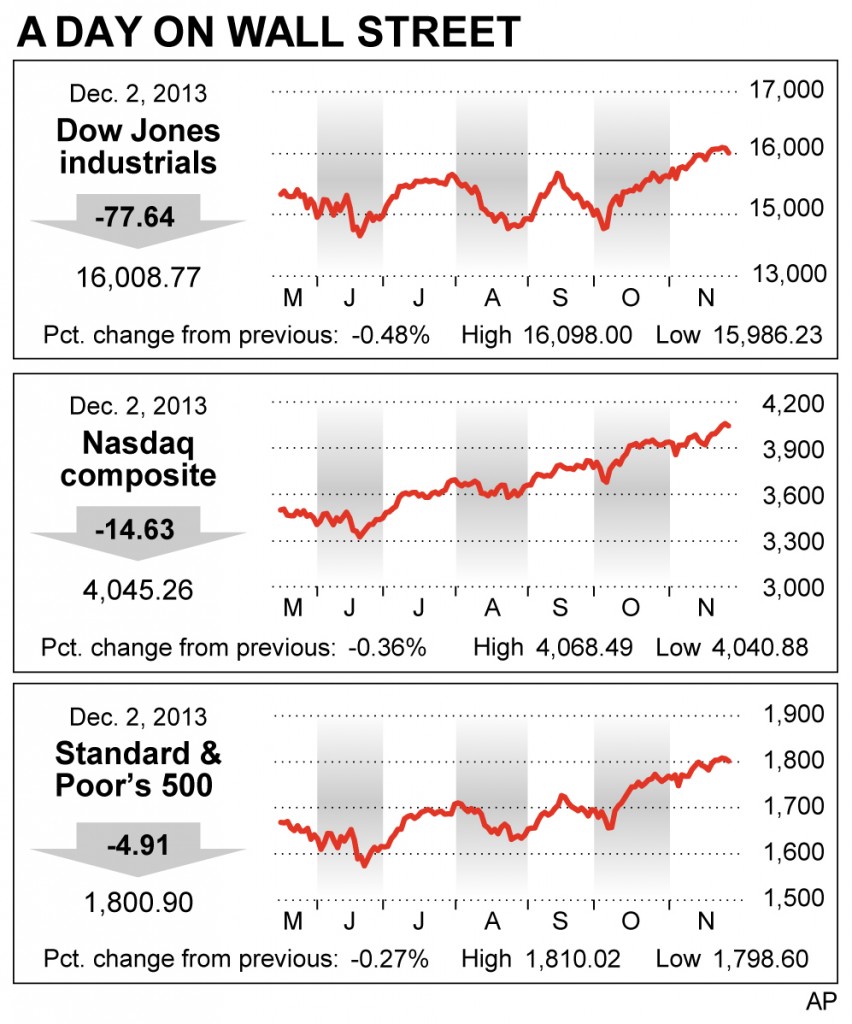 The final month of a stellar year for stocks began with a thud.

All three major indexes closed lower Monday, the first day of trading in December. Investors sold shares on signs that American shoppers — that seemingly inexhaustible fuel of global economic growth — may hold tight to their cash this year-end shoping season.

“This [winter shopping] season is not going to be a gangbuster,” said Lindsey Piegza, chief economist of Sterne Agee. “Retailers are bracing for declining activity from now to the beginning of the year.”

One big exception to the retailer doldrums was Ebay, which rose 1.6 percent thanks to signs of strong sales from its online auctions.

The Dow Jones industrial average has surged 22 percent this year and, if history holds, will add to that gain this month. The Dow has risen in December in three out of every four years going back to 1950, according to the Stock Trader’s Almanac. The average gain: 1.7 percent.

The government reported that developers boosted construction spending in October at the fastest pace in more than four years. A separate survey showed that manufacturing activity rose at its fastest pace in 2 1/2 years.

Joseph S. Tanious, global market strategist at JPMorgan, said he was encouraged by the reports, and saw little reason to sell. But he said many people have made so much money in the market already that they want to play it safe and lock in gains.

“Investors are looking for reasons to sell,” Tanious said. “But I think the markets will move higher between here and the year-end.”

Stocks have soared as the economy maintains a slow but steady recovery and companies continue to increase earnings. Demand for stocks also has been bolstered by Federal Reserve purchases of $85 billion of bonds each month. The goal is to hold down interest rates, make bonds less attractive than stocks, and stimulate the economy.

Stock investors are waiting for a government report on jobs Friday for clues about whether the stimulus policy is working and when the Fed will ease off its bond purchases. Investors have sold on days when they feared a Fed pullback was imminent.