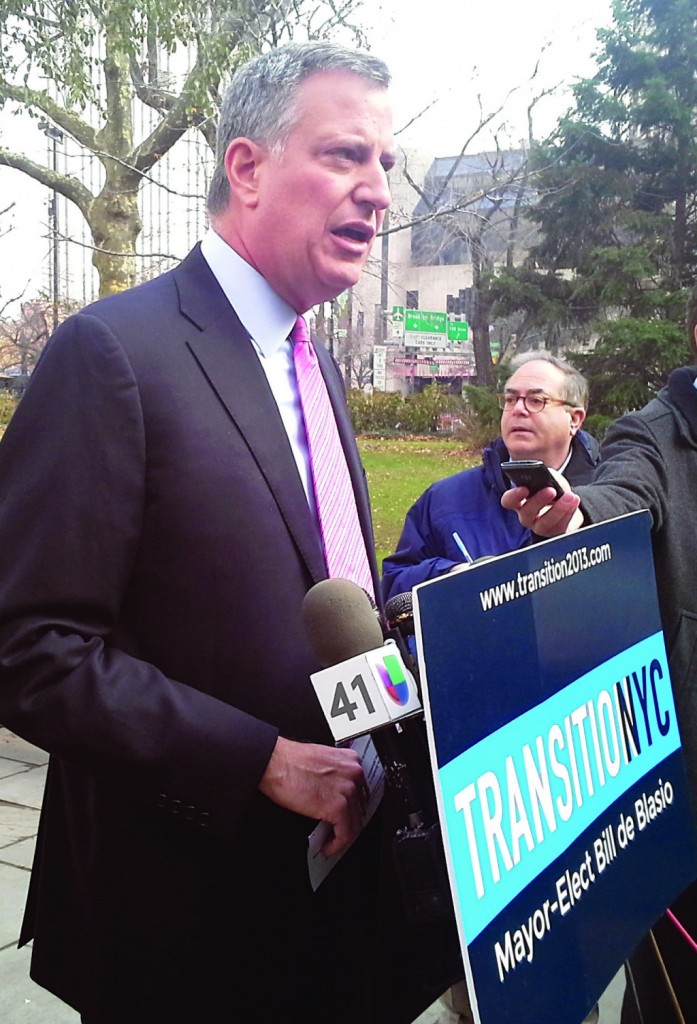 New York City Mayor-elect Bill de Blasio took another step Monday to push lawmakers to pass his universal pre-kindergarten plan and said that a full-on campaign on the issue was imminent.

De Blasio, a Democrat, wants to fund the pre-kindergarten and after-school programs for all middle school students with a tax hike on the wealthiest New Yorkers. That tax hike can only be passed by the state Legislature and some lawmakers in Albany have expressed reluctance to raise rates.

The mayor-elect, who takes office Jan. 1, met with some Democratic members of the state Assembly, including speaker Sheldon Silver, and said his plan was “warmly received.”

“We got a very clear vote of confidence from the Assembly members in the room,” de Blasio told reporters at a Manhattan news conference in the minutes after the meeting. “[There was] a lot of energy, a lot of willingness to help make this a reality.”

Gov. Andrew Cuomo, a fellow Democrat, has not committed to supporting the tax-hike, raising the possibility of settling on alternative methods of funding the pre-kindergarten proposal, which was the centerpiece of de Blasio’s mayoral campaign.

Several state Republicans have voiced strong opposition to the plan. But de Blasio said he was assembling a working group to spearhead a lobbying push in Albany in the coming weeks.

“There will be a full-scale campaign to achieve this goal,” de Blasio said. He has said he hopes to have the plan in place for the state’s next fiscal year, which begins in April.

But de Blasio did not reveal any other news about his transition, though he takes office in less than a month.

He has yet to announce any appointments to his administration, though he said Monday that a “major” position or two would be filled by week’s end. He has previously said that he would likely name his new police commissioner first.

He also did not reveal whether his family would move from their home in Brooklyn to Gracie Mansion, the mayor’s official residence in Manhattan, though he held a “family meeting” on the subject with his wife and two teenage children over the weekend.

De Blasio also largely declined to criticize outgoing Mayor Michael Bloomberg, who has taken some heat for not being on the scene of a Metro-North commuter rail derailment that killed four people Sunday. Bloomberg’s spokesman declined to comment on the mayor’s whereabouts and the mayor’s office has long refused to reveal Bloomberg’s location on weekends.

The Wall Street Journal reported Monday that Bloomberg was spotted golfing Sunday in Bermuda, where he has a home.

“I’ll let the current mayor speak for himself about his choice,” de Blasio said. “For me it would be, generally speaking, important to be there.”

Asked at his first appearance after the crash, some 12 hours after the incident, where he was, Bloomberg said he did not have to be there since it was a “state matter.”

“What can I do?” Bloomberg said, according to the Daily News. “Nothing I can do. All I can do is make sure that the right people from New York City, our police commissioner, our fire commissioner and emergency management commissioner are there.”

De Blasio also did not go to the Bronx crash site, but he said it was since he did not want to overstep his bounds.

“I thought it was smart to respect the state’s leadership and you know, Mayor Bloomberg is the mayor for the remainder of this month and we respect that,” he told Politicker, “and it’s his choice to make how he handles the situation and it’s important to defer to that.”

But he added that he plans to make the media aware of his schedule and location, even while out of the city.

“I think it’s important to alert the public and the media broadly about my whereabouts,” he said. “For security reasons and other important reasons, it may not be right down to the street address and where the front and back door are, that kind of thing. But broadly speaking, you know when we recently had the meetings in Puerto Rico, we gave a broad rendition of where we were.”