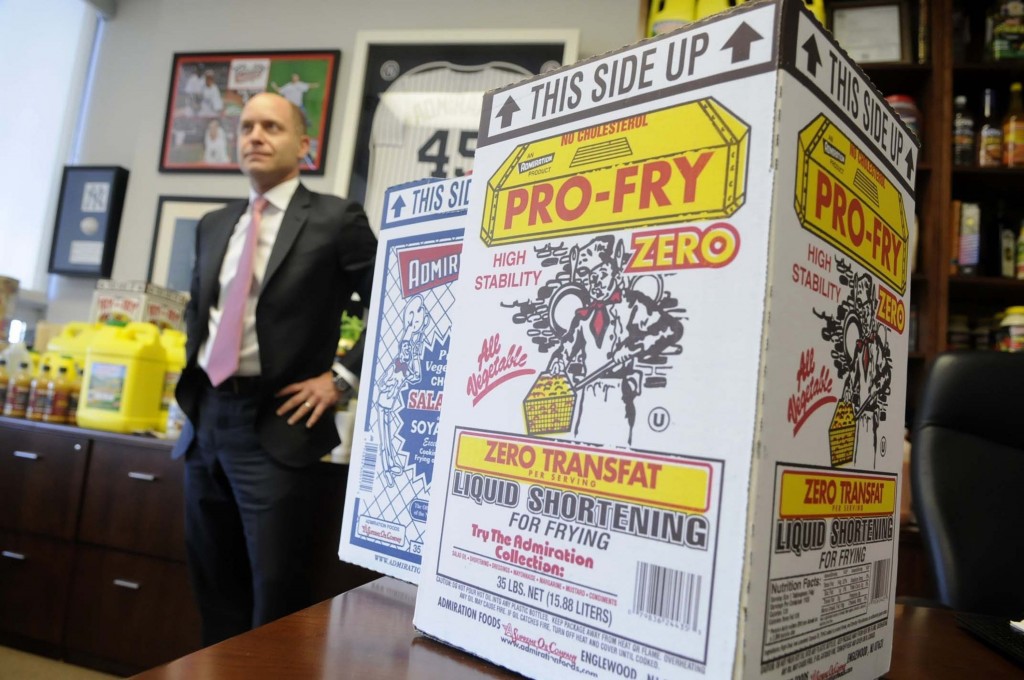 Supreme Oil Co. has been making vegetable oil products in Englewood, N.J., including some that contain trans fats, for more than 30 years.

But demand for its Pro-Fry commercial deep-frying oil and its Admiration brand margarine – both made with trans-fatty partially hydrogenated oil – has been on the wane and may soon disappear.

Concerns that consuming trans fats can put someone at a greater risk of heart attacks have been mounting for decades, and those concerns moved to the forefront recently as the Food and Drug Administration issued a preliminary determination that partially hydrogenated oils are not “generally recognized as safe,” setting in motion a possible national ban of the substances.

On Nov. 7, the FDA initiated a 60-day period for public comment that will allow food manufacturers to submit comments on how long they may need to reformulate foods that contain trans fats.

“Over the past 10 years, consumption of trans fats has declined by about 70 percent,” said Brian Todd, president of the Food Institute in Upper Saddle River, N.J, a trade group with 1,700 members.

“This would get the rest of it off the market,” he said of the FDA’s action.

About half the group’s members are food manufacturers, and “most have already started eliminating trans fats,” Todd said. “They have been moving in that direction for many years.”

While major restaurant chains like McDonald’s, Wendy’s and Dunkin’ Donuts have greatly reduced their reliance on trans-fatty oils in recent years, many small, independent restaurants have not.

Trans-fatty oils are still used by some food processors, mainly because they act as a preservative, according to Howie Velie, associate dean at the Culinary Institute of America in Hyde Park, N.Y. “If you can increase the shelf life to five days from three days, you have more time to sell it,” he said. “Everybody knows it’s not healthy. It’s really just the cheap, low-end producers that are still hanging on to it.”

Nevertheless, the FDA decision is expected to force many independent restaurants and bakeries around most of the country to change the way they make french fries and pastries. It will also force many food manufacturers to change ingredients used in certain processed foods, like frozen pizzas and dinners, cookie dough, coffee creamers and snacks, especially the least expensive brands.

Industry professionals say the available replacement oils cost more, and have been pushing prices of some foods higher in grocery stores and restaurants as use of hydrogenated oils has dwindled.

U.S. soybean growers, who fear losing ground to other oil-seed cultivators that are further along in providing bioengineered alternatives, have already been affected by the declining demand for partially hydrogenated soybean oil. They are questioning the need for the FDA action because, they say, the industry has already gone a long way in removing the unhealthy oils.

The health concerns surrounding partially hydrogenated oils have left companies like Supreme Oil and its multinational competitors like Cargill, Archer Daniels Midland and Bunge looking for suitable alternatives to meet chefs’ and food manufacturers’ expectations on price and quality.

U.S. demand for products made with trans fats fell sharply in the past decade, especially since 2006, when the government’s requirement to include trans-fat content on nutrition labels on packaged foods kicked in, Supreme Oil chief executive Michael Leffler said in an interview in his Englewood office in November.

The FDA requires companies to disclose trans-fat content on nutrition labels if a single serving contains half a gram or more.

Adding artificial trans-fat content data to nutrition labels had a profound effect on consumers’ food-shopping choices, to which manufacturers were fairly quick to respond with alternatives, including oleic canola and palm oils and other products, Leffler said.

“We are not worried about (a national ban) because our company is well-positioned to meet the government requirements,” Leffler said. “We have healthy solutions out there.”

Leffler, grandson of Seymour Unterman, who started the company 68 years ago in Brooklyn, said Supreme Oil is poised to adapt quickly, in part because of its experience with the ban in New York City, where the company sells deep-frying oils, salad oils and other products, mainly to independent Chinese, Greek and Latino restaurants.

The proposed national ban comes on the heels of bans and restrictions in California and a number of cities around the country.

According to the FDA, an artificial trans-fat ban could prevent 20,000 heart attacks and 7,000 deaths from heart disease each year. Partially hydrogenated oils are the source of most trans fats in the U.S. food supply, and they can cause heart disease and obesity. They raise bad cholesterol, lower good cholesterol, and “there is no safe level of consumption,” the FDA said.

Leffler said he introduced the Admiration brand Pro-Fry Zero several years ago in response to the ban championed by New York City mayor Michael Bloomberg. That trans-fat-free product is made with a bioengineered “high oleic” canola oil, which, like trans-fat oils, can stand up to repeated use in the deep fryer.

Supreme Oil charges $35 for a 5-gallon can, versus $30 for the same size of the original Pro-Fry, which is partially hydrogenated soybean oil.

In addition to its Admiration brand margarine, which has about 2.5 grams of trans fats per serving, the Englewood company now offers a zero-trans margarine made with palm oil instead of a partially hydrogenated oil.

Supreme Oil makes close to a billion pounds of vegetable oil a year, but “less than 10 percent” of it contains trans fats, and the company never derived much more than 10 percent of its revenue from partially hydrogenated oils, Leffler said.

The company employs about 400 people, including more than 150 in Englewood. Leffler declined to reveal sales statistics other than to say annual revenue measures in the “hundreds of millions” of dollars.

Leffler expects that a national ban on trans fats will push the price of palm oil, a common substitute for partially hydrogenated oils, higher in the coming year.

“It could go up as much as 25 percent,” he said. “It takes seven years to grow a palm tree that can generate fruit for seed.” Tropical storms in Asia also have been pushing the price of palm oil higher.

If trans fats are banned nationwide, wholesale supplies of partially hydrogenated vegetable oils in this country will no longer be available, Leffler predicts. As a result, he expects to lose some revenue from exports of partially hydrogenated oil, in addition to the loss of U.S. sales. Multinational manufacturers that own factories overseas are likely to grab that overseas business, he said.

He said the trans-fat ban will not result in layoffs at his company because he is expanding in other areas of the business, including retail sales of household cooking oils, mayonnaise and other products introduced in hundreds of stores in the past year.