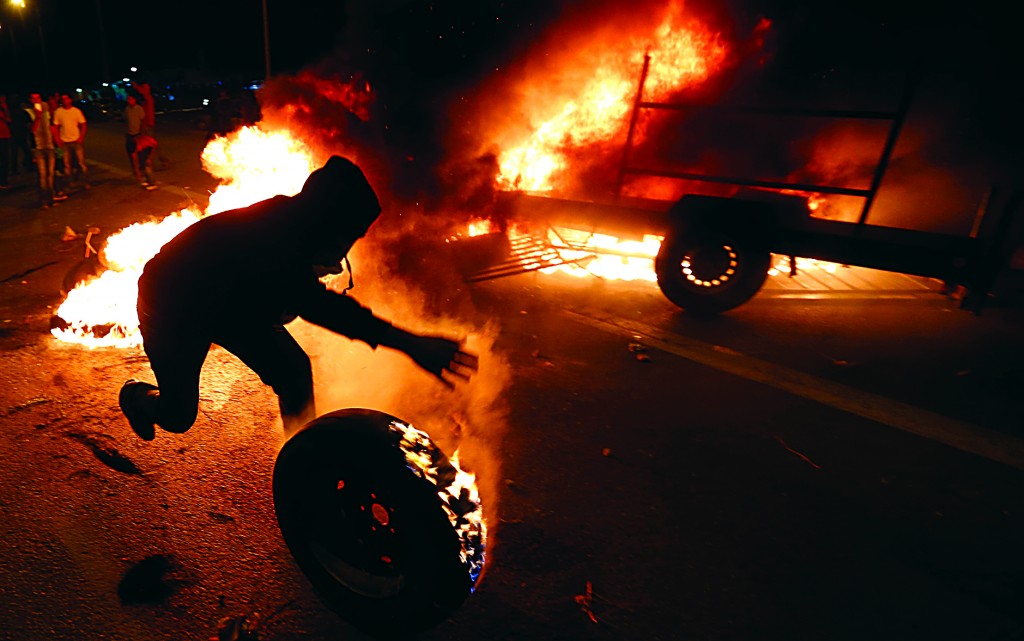 Violent protest demonstrations by Bedouin Arabs over a government plan to impose order on the chaotic housing situation in the Negev, exploited by Palestinians linking the issue to broader Palestinian demands, flared in several parts of the country over Shabbos.

The largest confrontation was in Hura Junction in the Negev, where over 1,000 demonstrators gathered. Police used tear gas, stun grenades and water cannon to disperse the rioters.

In Haifa, which has a large Arab population, the city center was the scene of scuffles between hundreds of Israeli Arabs and security forces. Police fired stun grenades and water cannon at the youths, who blocked a main thoroughfare, waving PLO flags and chanting: “With our souls and blood we will defend you, Palestine!” Reuters reported.

Eyewitnesses told Reuters that several demonstrators had been injured. An Israeli police spokesman said at least 28 people had been arrested in Haifa and Hura and some 15 officers treated for injuries.

“We will treat offenders to the fullest extent of the law and will not tolerate such disturbances,” he said.

“We have, and will have, no tolerance for those who break the law. Attempts by a loud and violent minority to deny a better future to a large and broad population are grave. We will continue to advance the law for a better future for all residents of the Negev.”

“Extremists, many of whom are not Bedouin, chose to divert the open debate about a purely social and humanitarian cause into a confrontation falsely linked to the Palestinian issue,” Netanyahu’s office said in a statement.

The eruption of violent confrontations took place against the backdrop of Knesset deliberations over a bill that by some estimates will move as many as 40,000 Bedouin from “unrecognized” villages into seven townships.

Approximately 200,000 Bedouin live in the southern desert, half in government-built townships and half in 42 ramshackle villages bereft of running water, electricity or sanitation.

The Prawer-Begin bill, handled by former minister Bennie Begin, is projected to cost 7 billion shekels, 2 billion of which would be earmarked for compensation payments, Israel Radio reported.

Foreign Minister Avigdor Lieberman called the rioting “serious but expected,” and the situation in the south “catastrophic.”

“It is our duty to stop the situation in which there are some citizens to whom the laws of planning and construction apply and there are others who ignore them and use violence to ensure the laws don’t apply to them,” Lieberman declared.

“Building permits are not only for Jews,” he added.

In response, MK Ahmed Tibi (UAL-Ta’al) called the foreign minister a fascist and “an immigrant who lives on land stolen from Arabs.” Lieberman came to Israel from Moldova and lives in Yehudah and Shomron.

Deputy Defense Minister Danny Danon (Likud) called for his Knesset faction to reexamine the bill. “It cannot be that we are giving state-owned land and getting uncontrolled violence,” he said.

Among the police who were hurt were Coastal District Commander Haggai Dotan; Navah Tabo, a spokesman from the Negev subdistrict; and an officer from the Central District who was stabbed in the leg by a protester.

“We approved a license for a peaceful protest, and to my dismay, from the beginning it declined very quickly when they began throwing rocks, and we were forced to close the highway. They also threw Molotov cocktails and garbage cans. There is an attempt to start a war here, but we won’t allow it to happen,” Halevy said.

Maj.-Gen. (res.) Doron Almog, head of the Economic and Community Development of the Negev Bedouin in the Prime Minister’s Office, told The Jerusalem Post that the protests are politically motivated and unrelated to the genuine concerns of the Negev Bedouin. He accused leaders of the Israeli Arab parties Balad and UAL-Ta’al, as well as the Islamic Movement, of exploiting the issue.

Arab MK Haneen Zoabi told Reuters at the Haifa protest, “We were here before Israel. What they’re doing in the Negev is what they’ve done to us all along. It may pass a vote, but the youth here and in the Negev will resist democratically in any way possible and stop them.”

Foreign Ministry officials are said to be concerned about demonstrations being planned in some European and Arab countries that could incite a new wave of anti-Israel sentiment.

On Friday, the British daily Guardian published a letter signed by 50 high-profile figures in the world of arts and entertainment condemning the Israeli plan for the Negev.