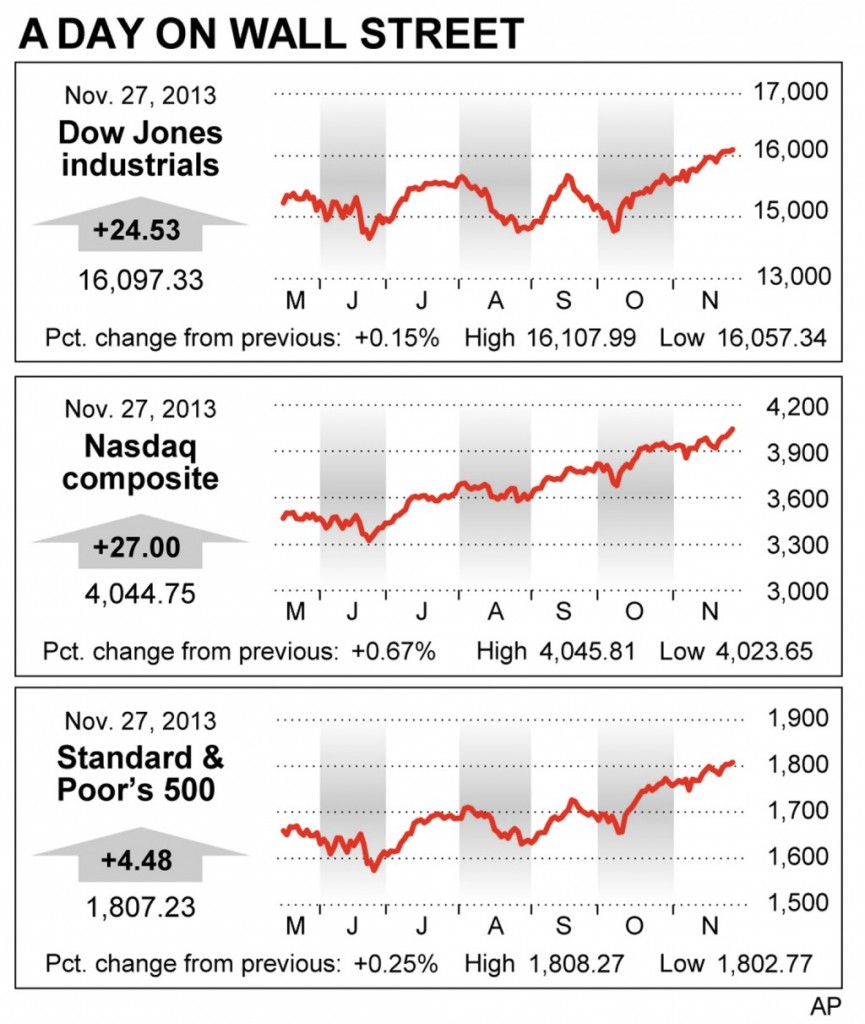 Hewlett-Packard surged, leading the gains for tech companies, after it posted a $1.4 billion profit for its latest quarter. The world’s second-largest maker of PCs also issued a strong profit forecast for its current quarter.

Stocks also got a boost from some encouraging news about the U.S. economy.

In a sign that workers are in less danger of being laid off, the number of Americans seeking unemployment benefits dropped 10,000 last week to a seasonally adjusted 316,000, according to the U.S. Labor Department. In another bit of good news, consumer confidence rose in November, according to a private survey by the University of Michigan and financial data company Thomson Reuters.

“Today’s economic news was generally favorable,” said Terry Sandven, chief equity strategist for U.S. Bank Wealth Management. “In the absence of bad news, the path of least resistance for equities is up.”

The stock market has surged this year on a combination of solid corporate earnings, a slowly recovering economy and easy-money policies from the Federal Reserve. The Fed is buying $85 billion in bonds every month to keep long-term interest rates low, making stocks more attractive than bonds for investors.

The Dow Jones industrial average rose 24 points, or 0.2 percent, to close at its own record high of 16,097.33. The blue-chip index finished higher for a fifth straight day, its longest winning streak since March.

The S&P 500 has risen 26.7 percent this year, putting it on course for its best annual performance since 1998. Much of the gain has come because investors have been willing to pay more for a company’s stock in relation to its earnings.

“When times are good, you have to ask if it’s a sign that things are about to become bad,” said Art Steinmetz, President & Chief Investment Officer at Oppenheimer Funds. But Steinmetz feels reasonably hopeful that stock valuations “are not overstretched.”

In other corporate news, Analog Devices fell $1.38, or 3 percent, to $48.54 after the chipmaker reported sales late Tuesday that missed Wall Street estimates. The Norwood, Mass., company expects a seasonal slowdown to hurt revenue during the holidays.

Trading volumes were lower than average ahead of Thursday’s Thanksgiving legal holiday, when financial markets will be closed. The New York Stock exchange and the Nasdaq will also close early on Friday.

The price of oil dropped to its lowest level in six months as the U.S. government reported the 10th straight weekly increase in crude supplies. Oil dropped $1.38, or 2 percent, to $92.30 a barrel.