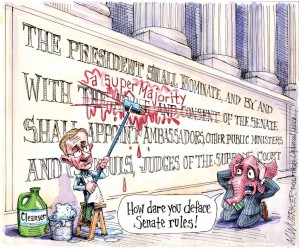 Last week, Senate Democrats invoked the “nuclear option” when they changed the Senate rules to require a simple majority to confirm nominees. In the past, when nominees were considered “extreme,” the minority had the ability to filibuster. This vote did away with that right. What is unprecedented here is not that the rules of the Senate were changed, but that a simple majority vote was employed to do it. Republicans had spoken about this option when Democrats blocked the nominations of Bush appointees, but a bipartisan “Gang of 14” agreement had Democrats consent not to filibuster some nominees in exchange for Republicans not supporting the rest. Before that agreement was struck, Democrats were outraged at the thought that Republicans would employ the nuclear option.

So I write these words today to urge my readers to think about the implications the nuclear option would have on the Senate and this country. I urge you to think not just about winning every debate, but about protecting free and democratic debate.

Because you’ve all heard it yourselves, I know it won’t surprise many of you to learn that a lot of people don’t think much gets done in Washington about the issues they care most about. They think the atmosphere has become too partisan, the arguments too nasty and the political agendas too petty.

But the American people send their senators to D.C. to be their voice. They understand that those voices can at times become loud and argumentative, but they also hope that they can disagree without being disagreeable. And at the end of the day, they expect both parties to work together to get the people’s business done.

What they don’t expect is for one party — be it Republican or Democratic — to change the rules in the middle of the game so that they can make all the decisions while the other party is told to sit down and keep quiet. The American people want less partisanship, but everyone knows that if the majority chooses to end the filibuster — if they choose to change the rules and put an end to democratic debate — then the fighting and the bitterness and the gridlock will only get worse.

I understand that Democrats are getting a lot of pressure to do this from factions outside the chamber. But they need to rise above an “ends justify the means” mentality because they’re there to answer to the people — all of the people — not just the ones wearing their party label.

In the long run, this is not a good result for either party. One day Republicans will be in the majority again, and this rule change will be no fairer to a Democratic minority than it is to a Republican minority.

I have to admit that the argument I just made is not my own. As a matter of fact, besides changes I made to reflect that it is now the Democrats who control the Senate, and not the Republicans (and other cosmetic changes), it is almost exactly a 2005 speech on the Senate floor by then-Senator Barack Obama.

It is a telling sign when defenders of this rule change need to preface their defense with the acknowledgement that those who pushed it through are hypocritical. But the actual policy itself is self-defeating.

What happened was more than just that the ability to filibuster nominees was taken away; what happened was that the Democrats passed a rule change using a simple majority for the first time in history. Democrats insist that the rule change is only for the president’s nominees to executive positions and judicial posts besides the Supreme Court. But the truth is that by doing this now, the Democrats have opened a Pandora’s Box, by setting a precedent that Senate rules already were changed in this way. As Minority Leader Mitch McConnell said to Majority Leader Harry Reid on the Senate floor, “You’ll regret this, and you may regret this a lot sooner than you think.”

There is nothing to stop a majority in the future from changing the rules for legislation as well — effectively ending the filibuster for all intents and purposes. The upside for this — and perhaps that is what McConnell was referring to — is that as soon as the Republicans get a majority in the Senate, they can vote to repeal Obamacare using a simple majority. And considering how that is working out these days, that may just be enough to win the GOP the Senate in 2014, and the presidency in 2016.

This article appeared in print on page 46 of the November 27th, 2013 edition of Hamodia.