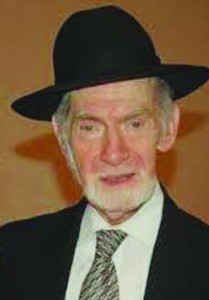 At first, Rabbi Fabian Schonfeld, Rabbi Emeritus of the Young Israel of Kew Gardens Hills, protested that he found it hard to speak about Rabbi Joseph Grunblatt, z”l. He had just lost a lifelong friend. But the mention of Rabbi Grunblatt’s name was enough to evoke a flow of loving memories.

Before World War II, they were friends in Vienna. Just before the war broke out, they learned together in Yeshivas Etz Chaim in London, where Harav Elya Lopian, zt”l, was the mashgiach ruchani and Harav Yechezkel Abramsky, zt”l, would give shiurim.

Even at that age, Yosef Grunblatt stood out. “He was always a great a masmid,” said Rabbi Schonfeld.  How much of a masmid? Rabbi Schonfeld told a story. The Chasam Sofer had a childhood friend who went into business. Years later, the friend asked, “We went to the same yeshivah, heard the same shiurim. How come you became the famous Chasam Sofer and I became businessman?”

The same, Rabbi Schonfeld said, with Rabbi Grunblatt. “He was the masmid of the yeshivah. At a tender age, he was already a yode’a sefer.”

After the war, both friends wound up in New York. Rabbi Schonfeld learned in Yeshivas Rabbeinu Yitzchak Elchanan, of Yeshiva University. Rabbi Grunblatt learned in Yeshiva Torah Vodaath. Rabbi Grunblatt’s first rabbinical position was in Saratoga Springs, New York. Then he moved to Montreal. In 1967, he returned to New York and to Queens Jewish Center —near his old friend, Rabbi Schonfeld, who had founded the Young Israel of Kew Gardens Hills.

“What a tremendous thinker!” Rabbi Schonfeld said … thinking out loud. “He was a real baal machshavah.”

Rabbi Grunblatt had the unique ability to speak and to give a lomdishe shiur. “He was a lamdan atzum.” Then, a few minutes later, he would give a shiur in Pirkei Avos that could reach non-Orthodox listeners. “He was an outstanding darshan and baal machshavah.”

More than anything, perhaps, Rabbi Grunblatt was “a man of integrity.”

This gentle man of learning was at the forefront of the battle to protect the integrity of the community. Negotiating with then-Mayor John Lindsay, Rabbi Grunblatt had the unique ability to calmly reach across barriers — with genuine respect to those on all sides of the issue. Working together with special appointee, attorney Mario Cuomo, Rabbi Grunblatt reached a compromise solution that everyone could live with.

Rabbi Schonfeld quoted the Gemara in Brachos: “Whosoever has a fixed place for his prayer has the G-d of Abraham as his helper.  And when he dies, people will say of him: Where is the pious man? Where is the humble man … one of the disciples of Avraham Avinu?!”

He was more than a scholar and a leader. He continually gave of himself. A father figure to his kehillah, “If he was about to travel and heard someone was sick, he didn’t go.”

Summing up his feelings, Rabbi Schonfeld said that Rabbi Grunblatt was a genuine “adam gadol. He was not just a great man; he was a great mentch. Whatever a Rav had to be, he was.”

Rabbi Steven Weil, Executive Vice President of the Orthodox Union said, “Rabbi Grunblatt gave a sense of majesty to the Torah … and dignity to everything he represented. He knew how to take abstract ideas and communicate them in a concrete way that made them palatable to scholar and layman alike.”

Even more than the power of his ideas was the power of the person. Rabbi Weil said, “After encountering Rabbi Grunblatt, you appreciated what a human being could be. He made you into a better human being and a better Jew.”

Rabbi Menachem Genack, CEO of the Orthodox Union Kosher Division and himself a noted scholar, exclaimed, “I loved Rabbi Grunblatt! He was my hero. As a Rav, he was very reserved and extremely intellectual.” At the same time, he added, “But he was very caring…. His speeches were eloquent… extraordinary. Sui generis.”

Many of the policies of kashrus at the OU were established by Rabbi Grunblatt when he headed the Rabbinic Kashrus Commission. “Everyone would be silent when he spoke.” Yet he had a wonderful self-effacing humor. He would joke that if he needed to make an important point, “Who is going to listen to Yosef Grunblatt?” So he would say that “an adam Gadol said….”

And truly he was an adam Gadol — a role model for generations of Rabbanim.

This article appeared in print on page 36 of the November 27th, 2013 edition of Hamodia.