President Barack Obama has pulled off a historic deal with Iran on curbing its nuclear program but he and other global leaders now have tough work ahead turning an interim accord into a comprehensive agreement.

In a sign of how difficult the coming talks will be, some differences emerged between Secretary of State John Kerry and his Iranian counterpart in their public presentation of a key part of the deal — whether or not Iran preserved the right to enrich uranium.

Obama also has to persuade  Israel — whose Prime Minister Benjamin Netanyahu denounced the deal as a “historic mistake” — that the accord will reduce and not increase the threat from its arch foe Iran. And he has to sell the accord to skeptics in Congress, including some in his own Democratic Party, who have been pressing for more sanctions on Iran.

The breakthrough accord was reached in the middle of the night at talks in Geneva between Iran, the United States, China, Russia, France, Britain and Germany. It won the critical endorsement of Iranian clerical Supreme Leader Ayatollah Ali Khameini and marked a clear turn in a U.S. relationship with Iran that has been fraught since the 1979 Islamic Revolution, and vexed for years over the Iranian nuclear program.

The deal halts Iran’s progress on its nuclear program, including construction of the Arak research reactor. It will neutralize Iran’s stockpile of uranium refined to a fissile concentration of 20 percent, which is close to the level needed for weapons, allow increased U.N. nuclear inspections, and halt uranium enrichment over a fissile purity of 5 percent.

But nobody doubted that tough work lies ahead in moving on from the initial deal that allows a six-month period of limits to Iran’s nuclear program in exchange for up to $7 billion worth of sanctions relief, while leaving both the program and the sanctions in place.

“Now the really hard part begins and that is the effort to get the comprehensive agreement, which will require enormous steps in terms of verification, transparency and accountability,” Kerry said as he began a meeting with British Foreign Minister William Hague in London.

The agreement, which halts Iran’s most sensitive nuclear activity, its higher-grade enrichment of uranium, was tailored as a package of confidence-building steps towards reducing decades of tension and ultimately creating a more stable, secure Middle East.

Iranian Foreign Minister and chief negotiator Mohammad Javad Zarif flew home from Geneva to a welcoming crowd, a reflection of the relief felt by many Iranians exhausted by isolation and sanctions that have been particularly punishing in the last two years.

Zarif said in an interview broadcast on state media that Iran would move quickly to start implementing the agreement and it was ready to begin talks on a final accord.

“In the coming weeks — by the end of the [secular] year — we will begin the program for the first phase. At the same time, we are prepared to begin negotiations for a final resolution as of tomorrow,” Zarif said. 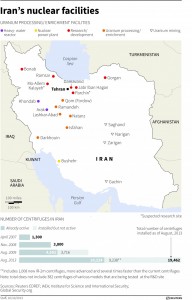 Sunday’s agreement to curb Iran’s nuclear program contains an apparent gap that could allow Tehran to build components off-site to install later in a nuclear reactor where it has promised to halt work, experts said.

They said any impact of the omission is likely to be small if Iran follows other undertakings in the interim accord, which is designed to restrain Tehran’s nuclear program for six months in return for limited sanctions relief.

But the gap, which one diplomat described as a potential “loophole,” could provide a test of Iran’s intentions, and demonstrates how difficult it will be to reach a final deal to resolve Iran’s nuclear standoff with the West once and for all.

Iran’s uncompleted heavy-water research reactor near the town of Arak emerged as one of the most important issues in marathon negotiations in Geneva last week that ended early on Sunday with a breakthrough deal.

Tehran has earlier said it could open the reactor as soon as next year. It says its purpose is only to make medical isotopes, but Western countries say it could also produce plutonium, one of two materials, along with enriched uranium, that can be used to make the fissile core of a nuclear bomb.

Much of the final day of negotiations was taken up with the major powers pressing hard for language that would stop Iran from completing the reactor.

In the deal, Iran agreed that it will “not make any further advances of its activities” at Arak, language that also covers its two big uranium enrichment plants, Fordow and Natanz.

Footnotes hammered out in the final hours of the talks set out a range of activities that would be forbidden at the reactor. For the half year covered by the agreement, Iran is barred from starting the reactor up, bringing fuel or heavy water to it, testing or producing more fuel for it, or installing any remaining components.

But no language explicitly prevents it from making components elsewhere, which could then be installed later.

Former chief U.N. nuclear inspector Olli Heinonen, now at Harvard University, said the measures were good, but could have been better: “I would have also included the manufacturing of key components,” he told Reuters in an email.

This article appeared in print on page 1 of the November 26th, 2013 edition of Hamodia.