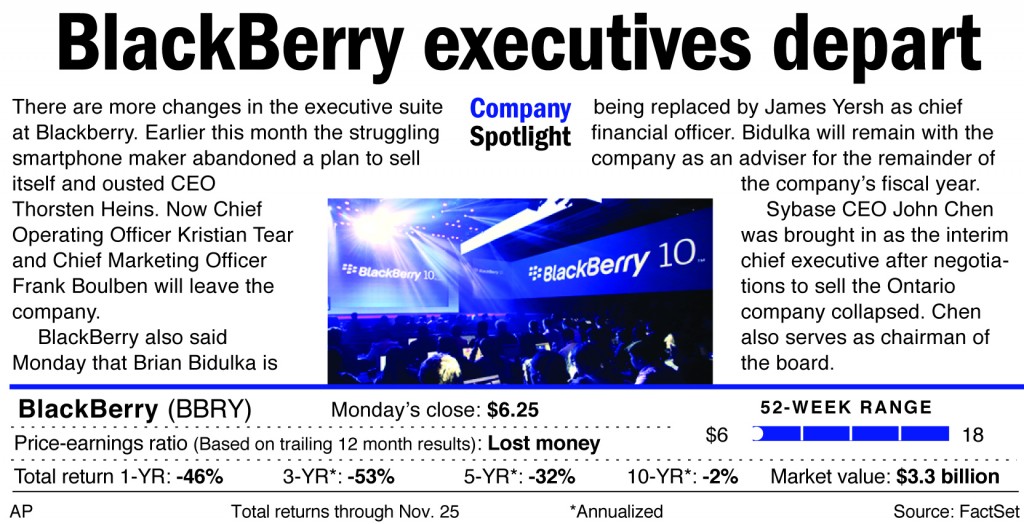 BlackBerry’s interim chief executive has shaken up BlackBerry’s management team, in a move seen as a prelude to him taking the top job himself.

And the company said Monday that Brian Bidulka is being replaced by James Yersh as chief financial officer. Yersh previously served as senior vice president and controller.

Former Sybase CEO John Chen was brought in as the interim chief executive after negotiations to sell the Waterloo, Ontario, company collapsed this month. Chen also serves as executive chair of the board.

BlackBerry quickly lost dominance as the leading smartphone maker as the popularity of the iPhone surged. The much-hyped BlackBerry 10 system, its latest phones, were a flop. The company disclosed in September that it would book nearly a billion dollars in losses related to unsold phones.

The company recently announced 4,500 layoffs, or 40 percent of its global workforce, and reported a quarterly loss of nearly $1 billion.

Chen said he’ll continue to align the management team with his priorities. “I look forward to working more directly with the talented teams of engineers, and the sales and marketing teams around the world to facilitate the BlackBerry turn-around,” Chen said in a statement.

BGC analyst Colin Gillis said the reshaping of a leadership team is what a CEO does and that the company should just name Chen as CEO.

“You let whoever is going to be the CEO make those decisions. It kind of bothers me because it just seems like the search process is a farce. I mean, the guy has more than an $80 million pay package. He’s blown out every other top manager. That’s not your decision to make as interim CEO,” Gillis said.

Chen, whose background is in enterprise software, has placed much more of an emphasis on BlackBerry’s software business than its handset, or smartphone business. Chen told The Associated Press earlier this month that he would be looking for a CEO with a strong software and services background, and noted that he wanted to monetize BlackBerry Messenger, the popular messaging application. BlackBerry also has a mobile device management business, which allows IT departments to manage different devices connected to their corporate networks.

Fairfax head Prem Watsa, BlackBerry’s largest shareholder, has praised Chen’s work turning around Sybase, an enterprise software data management company. Chen was chairman and CEO from 1998 until the company was acquired in 2010 by SAP AG.

Gillis said Chen clearly wants to make BlackBerry more of a software company. The new direction could mean the company might ultimately get out of the business of selling smartphones.

“The path that he’s choosing, it might work, or he could kill… whatever value it has left,” Gillis said.

The decline of the BlackBerry has come shockingly quickly. In 1999, BlackBerry became a game-changing breakthrough in personal connectedness. It changed the culture by allowing on-the-go business people to access wireless email. Then came a new generation of competing smartphones, and the BlackBerry suddenly looked ancient. Apple debuted the iPhone in 2007 and showed that phones can handle much more than email and phone calls. In the years since, BlackBerry has been hammered by competition from the iPhone as well as Android-based rivals.