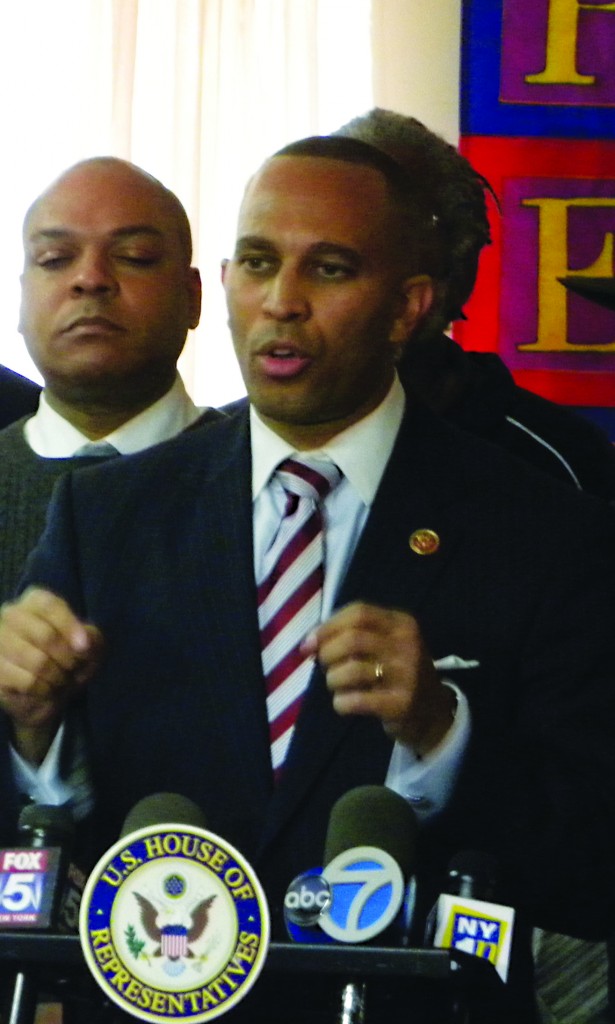 A consortium of Brooklyn’s top African-American leadership on Monday condemned in harsh terms the knockout game favored by some school gangs in minority communities, a senseless attack that has spread fear throughout Jewish areas of south Brooklyn over the past few weeks.

For the first time in history, come January, Brooklyn’s entire political leadership will be African-American. And they all joined several Jewish leaders at a press conference organized by Rep. Hakeem Jeffries, a freshman Democrat from Coney Island who has gradually taken a leadership position in the borough.

“Random acts of violence, particularly when targeted at people on the basis of race or religion, will not be tolerated,” Jeffries said at the conference at the Crown Heights Youth Collective. “If you violently participate in the knockout game, we will do everything in our power to make sure that the criminal justice system is there to knock out socially unacceptable behavior.”

In the sick game, participants try to knock out the unsuspecting victim with a single blow to the head. The NYPD’s Hate Crime Task Force is investigating a rash of about a dozen incidents in Crown Heights and Midwood since all the attacks were perpetrated by black or Hispanic teenagers on recognizably Orthodox Jews.

Jeffries added that in addition to steps to combat the phenomenon, police must “positively reinforce young people” so that they will be invested in the community.

Thomspon, who as district attorney in January will take the lead in prosecuting anyone arrested for a knockout, said that he considered the gathering a final warning to youths engaged in the crime.

“I’m here, standing with my colleagues in government, a group of African American and West Indian American leaders,  to reach out now, before it’s too late, to any young person, who thinks, for one second, that it’s cool to sucker punch a totally unsuspecting, defenseless person for laughs or to gain some ridiculous measure of status,” Thompson said.

“There is no status to be gained when you cowardly sucker punch a defenseless victim or you watch or encourage a friend to do the same. It’s not cool, it’s not right, we know better, and it won’t be tolerated. A civilized society demands that we can not and will not tolerate such senseless violence.”

Adams, a current state senator and a former cop, declared bluntly in a speech aimed at attackers, “To these gutless offenders we say loud and clear: play this game, and you will lose.”

And Cumbo, who will represent Crown Heights in the Council in January, said she was “devastated” that children in her community “have made the decision” to attack others for amusement.

Jeffries and Clarke promised to propose federal legislation to toughen penalties against anyone convicted of a knockout attack.