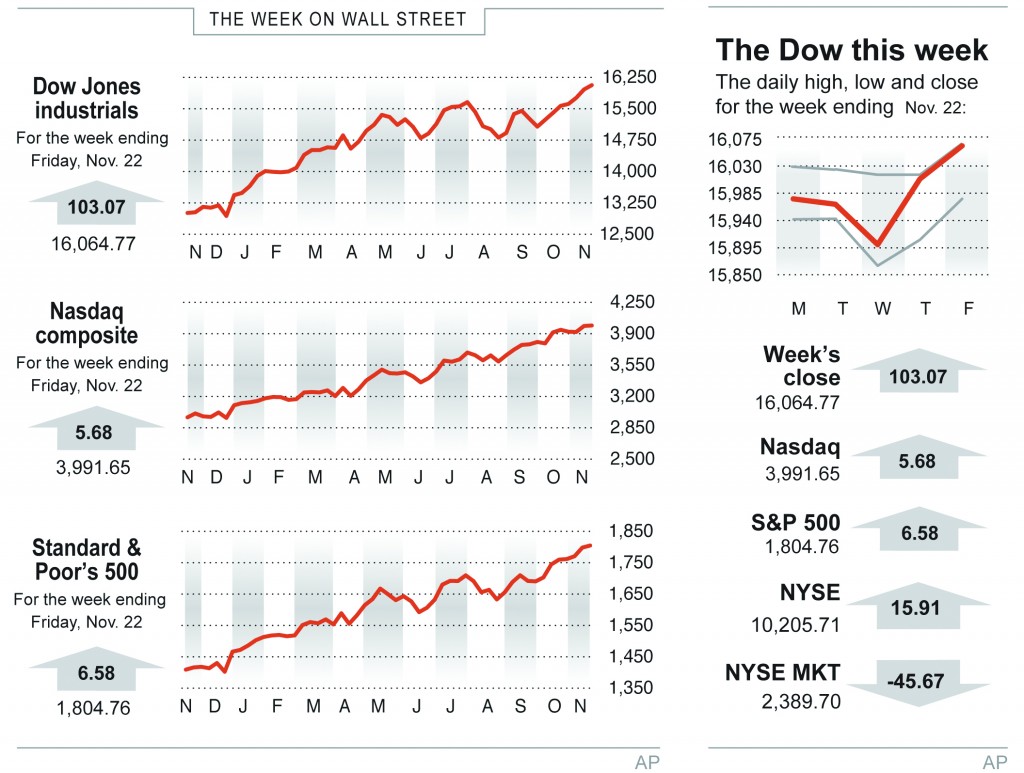 The stock market brushed past another milestone on Friday.

The Standard & Poor’s 500 index closed above 1,800 for the first time, capping seven straight weeks of gains.

The broader index is on track for its best performance in 15 years as a combination of solid corporate earnings, a strengthening economy and easy-money policies from the Federal Reserve draw investors to stocks. Stocks have also gained because they offer an attractive alternative to bonds, where interest rates remain close to all-time lows.

“You can’t really get better returns other than in the stock market,” said Peter Cardillo, chief market economist at Rockwell Global Capital. “It’s been a quality run-up in stocks.”

On Friday, health-care stocks led the market’s rise. Biotechnology company Biogen Idec surged on reports that it won market exclusivity for its top-selling multiple sclerosis drug in Europe. The company’s stock jumped $33.19, or 13 percent, to $285.62.

Health-care stocks have also led gains in the S&P 500 this year, rising 38 percent. The industry is attractive to investors. Some of its companies, like Biogen Idec, offer the possibility of explosive growth. Others are established players like Pfizer, which pays big dividends. Health insurance companies have also done well this year as the Affordable Care Act rolls out.

Despite their big gains, stocks could continue to rise. The economy is forecast to keep recovering and that helps companies increase their earnings. And while stock valuations have risen, they are still attractive compared with bonds.

However, investors will likely have to look harder to find winning stocks next year, said Paul Hogan, co-manager of the FAM Equity-Income Fund.

“We’ve had the rising tide, but going forward, it’s the stock pickers that will tend to do better.”

Among single stocks that have done well this year, there are two standouts, Netflix and Best Buy.

Still, there are also grounds for caution.

Given the strong gains this year, stocks are no longer a bargain.

While investors shouldn’t necessarily sell, they should temper their expectations for the level of returns, he said.

Investors will also have to deal with the end of the Fed’s stimulus program, possibly this year.

The central bank is currently buying $85 billion of bonds a month to hold down long-term interest rates, and to help support the stock rally. The stock market’s only two months of decline this year, in June and August, came when investors fretted that the central bank was poised to start reducing, or tapering, its stimulus. Investors sold Treasury notes, long-term interest rates rose and stocks fell.

“The clear headwind that is on everyone’s radar screen is the pace and the timing of the Fed’s taper,” said Jim Russell, regional investment director at US Bank. “That will prove to be a little bit of an adjustment.”

In government bond trading, the yield on the 10-year Treasury note fell to 2.75 percent from 2.79 percent on Thursday. The yield climbed as high as 3 percent Sept. 5, on concern that Fed policy makers were poised to cut their stimulus.