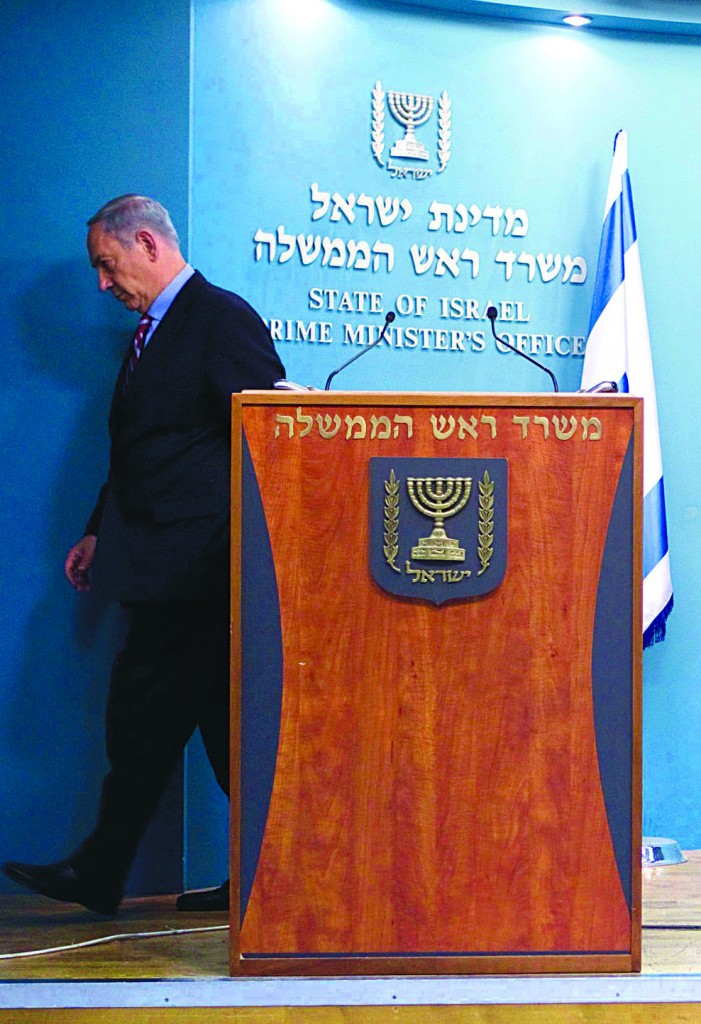 After months of intensive lobbying against an interim agreement that would allow Iran to continue its nuclear program proved futile, all that Israeli Prime Minister Binyamin Netanyahu could do on Sunday was to denounce it once again as a “bad deal” to which Israel would not be bound.

Netanyahu called the Geneva agreement a “historic mistake,” and effectively rejected President Barack Obama’s endorsement of it as a “new path toward a world that is more secure.”

“This is a bad deal. It grants Iran exactly what it wanted — both a significant easing in sanctions and preservation of the most significant parts of its nuclear program,” an official in Netanyahu’s office told Reuters.

“The economic pressure on Iran could have brought about a much better deal, which would have dismantled Iran’s nuclear capabilities,” he added.

In Washington, a senior U.S. official said President Barack Obama would discuss Israel’s misgivings over the phone with Netanyahu on Sunday.

Meanwhile, in an interview with CNN on Sunday, Secretary of State John Kerry sought to reassure Israel.

Kerry said, “I believe that from this day — for the next six months — Israel is, in fact, safer than it was yesterday because we now have a mechanism by which we are going to expand the amount of time in which [the Iranians] can break out [toward making a nuclear bomb]. We are going to have insights to their program that we didn’t have before.

“I believe that Israel, in fact, will be safer, providing we make sure that these … sanctions don’t get lifted in a way that reduces the pressure on Iran — and we don’t believe they will be, there’s very little sanctions relief here — that the basic architecture of the sanctions stays in place,” Kerry said.

“Israel does not see itself as bound by this … very bad agreement that has been signed,” Bennett told Army Radio. “If Israel sees that Iran is endangering it, it is permitted to defend itself and is capable of defending itself.”

Foreign Minister Avigdor Lieberman called the Geneva deal Iran’s “greatest diplomatic triumph” since its 1979 Islamic revolution, and warned it could touch off an arms race among Sunni Arab states that view the Iranian Shiites as a threat.

However, when asked on Israel Radio whether he felt betrayed by the United States for its role in the deal, Lieberman replied: “Heaven forbid.”

Speaking from Canada, where he is attending a conference of defense ministers, Moshe Yaalon said the agreement “allows Iran to enter the family of nations despite being the most active and flourishing activator of terrorism in the world, which sends its deadly and uncurbed arms across the globe, first and foremost against Western states, as regime representatives sit at the table in Geneva.”

MK Rabbi Meir Porush of United Torah Judaism said, “The prime minister needs to know that the Torah is the only thing that can defend and save the Jewish people. We as Jews believe that the attempts to harm the world of Torah harm the security of Israel. By advocating drafting yeshivah students and cutting funding to yeshivos, the government is endangering Israel’s security — with one result being that Iran has now been strengthened.”

Shas MK Eli Yishai reacted Sunday morning to the deal by saying, “The world’s countries only saw the economic interests of the deal and not their obligation to the security of Israel.” He added that Israel “has no one to trust besides our Father in Heaven.”

“The deal is a very bad one for Israel,” Yishai continued. “Diplomacy is always the best path, but in this case it has failed dramatically. Even though we are in the opposition, we will support the prime minister in his efforts to increase Israel’s security.”

But the reaction was not uniformly critical. Amos Yadlin, former military intelligence chief and current head of the Institute for National Security Studies, counseled against rejectionism.

“The world powers wanted to reach an agreement. I hope that the prime minister is now formulating a strategy to see what happens in the next six months. That, and not what happened last night, is what is important,” Yadlin said.

Although not a “dream agreement” when compared to the proposed deal floated in Geneva earlier this month,  the final version is an improvement, Yadlin asserted.

He also pointed out that Netanyahu’s lobbying efforts did bear certain fruits. Yadlin credited him with improvements that appeared in the second draft agreement. For example, unlike the first draft, the current arrangement freezes nearly all Iranian activities at the Arak heavy water reactor (a suspected plutonium path for the nuclear program), and forces the Iranians to neutralize their stockpile of 20-percent uranium, The Jerusalem Post reported.

“The Americans are going to put the Iranians to the test. This needs time. We’d all be happier if the current agreement would have rolled Iran back more. Both sides needed an initial agreement to gain legitimacy at home for additional steps. There’s no need to be too excited by this,” Yadlin said.

Addressing concerns that the easements might lead to a collapse of the sanctions regime, Yadlin said the Geneva deal would give the Iranian economy $7 billion dollars, which “is not what they need at all.”