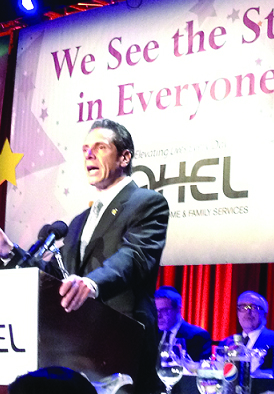 Speaking to the close to 1,300 guests who — despite the frigid weather — filled the ball room of the New York Marriott Marquis for the 44th Annual OHEL Dinner, New York State Governor Andrew Cuomo spoke passionately about protecting the rights of the disabled and vowed a “zero tolerance policy against anti-Semitic acts.”

The Governor, who was introduced by Assembly Speaker Sheldon Silver, underscored the importance of a safety net for the disabled and others who are vulnerable. Cuomo declared that New York State has a long history of coming to the aid of those in need of such protection. He cited the example of FDR, and declared that the late president’s polio — which left him unable to walk unaided — didn’t weaken him but made him stronger.

He quoted First Lady Eleanor Roosevelt as saying that her husband’s illness “gave him strength and courage he had not had before.”

Cuomo also spoke of a 21-year -old New Yorker named Sylvia Bassoff who was partially paralyzed from polio. In 1935, after she was unable to get a job,  though she was educated and motivated, because she was marked “PH,” she had enough and decided to do something about it.

She went to Washington, met with top people and got the WPA to drop its discriminatory policies, began hiring people with disabilities.

The Governor also spoke with pride of the NYS Justice Center for the Protection of People with Special Needs, which tracks, investigates and prosecutes serious abuse and neglect complaints.

“The Center opened this past June, and so far has processed 31,400 hotline calls and investigated 6,300 reports of abuse or neglect,” Cuomo said.

Cuomo also addressed the recent reports of rampant anti-Semitism and physical assaults on children and families at Pine Bush Schools in the Hudson Valley, and of his instructions to the State Police and the Division of Human Rights to undertake a full investigation into the circumstances of the events.

The governor declared that new York State will have a “zero tolerance policy” on anti-Semitism, a remark that drew thunderous applause from the crowd.

NYC Mayor Elect Bill de Blasio also addressed the gathering, which attracted a number of elected officials.  De Blasio, who described himself as a longtime friend of the leading Jewish social services agency, had warm words of praise for the many accomplishment of Ohel Children’s Home and Family Services.

De Blasio pointed out that he had named Moshe Hellman, the Co-President of OHEL, as a member of his transition team, and promised that OHEL will have a friend in City Hall.