Dow Average Closes Above 16,000 for the First Time 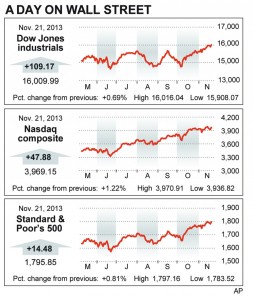 The Dow Jones industrial average closed above 16,000 for the first time Thursday as the blue-chip index races toward its best year in a decade.

The Dow has been on fire lately, propelled higher by a combination of solid corporate earnings, a steadily strengthening economy and easy-money policies from the Federal Reserve.

“The market has come a long way,” said Dan Seiver, an economist at San Diego State University. “It’s a sign of just how far financial markets have recovered.”

The Dow has more than tripled since its bear market low in March 2009.

Back then, the country was in the worst downturn since the Great Depression, the housing market had collapsed and individual investors had abandoned stocks.

Now, with the economy recovering and confidence returning, small investors are coming back in.

“People are getting out of bonds into stocks,” said Steven Ricchiuto, chief economist at Mizuho Securities. “We’re in the early stages of a recovery.”

The Labor Department reported before the market opened that applications for unemployment benefits dropped last week to the lowest level since September. The number of applications is close to where it was before the Great Recession.

General Motors rose after the U.S. government said it expects to sell its remaining stake in the company by the end of the year. The Treasury Department got shares after bailing out GM five years ago, but once its sells, the automaker will be free of restrictions on executive pay that came with the bailout. It would also be free to pay dividends if it chooses.

“Having the Treasury out is probably something that is going to be positive for the shares,” said Jeff Morris, head of U.S. equities at Standard Life Investments. “Some investors are probably a bit spooked by having a meaningful amount of government ownership.”

Johnson Controls was among the biggest gainers in the S&P 500. The company, which makes heating and ventilation systems for buildings, said its board approved a $3 billion increase in its share buyback program. The company rose $2.13, or 4.4 percent, to $50.35.

In government bond trading, the yield on the 10-year note edged down to 2.79 percent from 2.80 percent Wednesday. The yield, which is a benchmark used to set interest rates on many kinds of loans, including home mortgages, is the highest it’s been since Sept. 17.

This article appeared in print on page 8 of the November 22nd, 2013 edition of Hamodia.