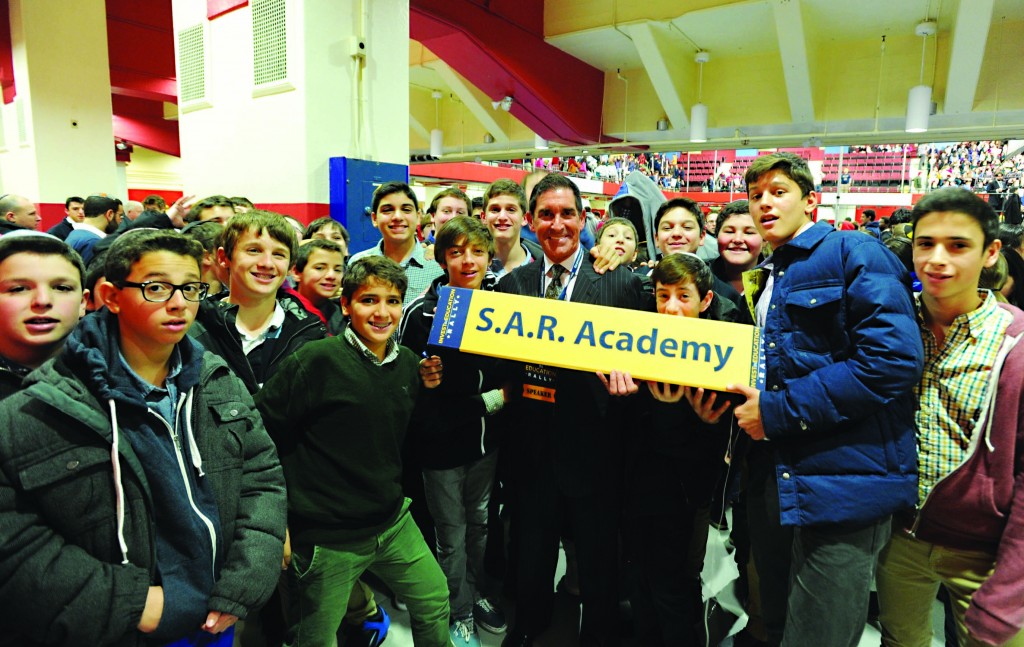 Thousands of private, religious and charter school students rallied Tuesday to urge the New York state legislature to pass a pending bill that would give tax incentives for tuition donors — legislation that is expected to bring millions of dollars into their schools.

The nearly 5,000 students, elected officials and civic leaders gathered at the Westchester County Center to pressure the Assembly to pass the Education Investment Tax Credit bill. The Republican-led majority in the state Senate approved the bill twice already, but it was blocked by the Democratic Assembly.

The students, representing about 60 upstate Jewish and Catholic schools, cheered boisterously and waved placards — such as one declaring that there is “no room for politics in education” — showing their support for the bill.

“Shout until they can hear you all across the Hudson River!” shouted emcee James Hassell, a pastor in Yonkers. “What have you come to tell Albany? We want school choice!”

Rabbi Yehiel Kalish, vice president for development and state relations at Agudath Israel, said in his address to the “Invest in Education” rally that religious schools offer a safer environment for students, and government should do more to help parents with the crushing tuition burden.

“We know that this bill will only pass with the intervention of the Alm-ghty,” Rabbi Kalish said. “Let our prayers focus on those suffering in failing public schools, terrified to attend class, [for] parents who are disgusted at an uncaring and outdated system.”

The proposed law would allow anyone donating money toward education, whether it’s for public, private or religious schools, to qualify for a commensurate tax credit. Billions of dollars in charity donations fueled by tax credits are a major portion of the budgets of many non-profit organizations, and private schools believe extending it to education will significantly aid its parent body with tuition bills.

The rally is the second in a series designed to promote aid for religious schools. A previous one, held in Buffalo back in April, drew close to 10,000 people.

While yeshivos grapple with parents who struggle to meet tuition payments, which often consume a major part of their daily living expenses, the matter is even more dire for Catholic schools. Since a significant percentage of their student body is not Catholic — they come for the safer environment and higher education level — some of them simply leave when tuition becomes too hard to pay.

Hundreds of Catholic schools in New York have closed over the past few years, with the state’s public school system forced to pick up the tab to pay for their education. And it comes at a much greater expense to the state. While Catholic schools educate a child at about $11,000 a year, it costs the public school $19,000, close to double that amount.

Cathleen Cassel, regional superintendent of Catholic schools for Rockland County, said the law was “about fairness.”

One speaker at the rally, state Sen. David Carlucci, an Independent Democrat from Rockland County, is a sponsor of the Senate bill. He said he felt that the upcoming legislative session beginning in January would be the one to finally passed the bill, which activists consider the next frontier in education equability.

The legislation is “an out-of-the-box approach to fund schools,” Carlucci said. “We need to do everything possible to leverage outside money and not simply rely on tax dollars.”