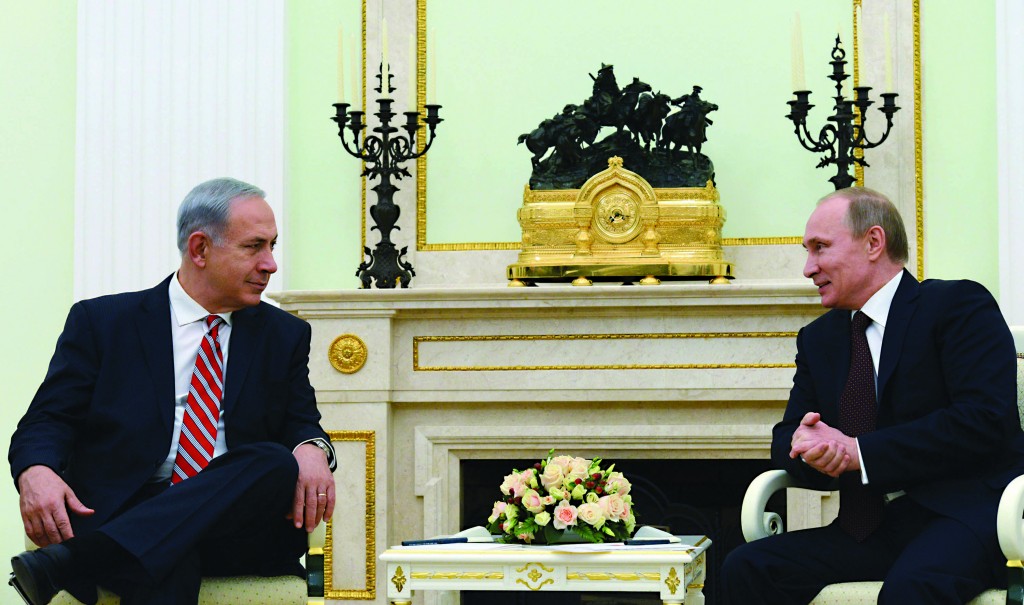 As Israeli Prime Minister Binyamin Netanyahu flew to Moscow on Wednesday to meet with President Vladimir Putin, prospects of preventing the world powers from reaching an interim agreement with Iran over its nuclear program appeared almost nil. Still, the Israeli leader is hoping that his efforts to mitigate “a very bad deal” could still pay off.

Russia, in particular, has been more accomodating to Iran, and even less likely to change course than the United States, which looks eager for a deal.

At a joint press conference in Moscow on Wednesday, Putin gave no indication of budging. “We hope in the near future a deal would be agreed upon by all sides,” he said, as Netanyahu looked on.

Putin stood impassively as Netanyahu again hammered home his message: that the deal being proposed will not be enough to stop Iran’s nuclear weapons program.

Netanyahu made no statement to the media prior to the visit on Wednesday, but Deputy Israeli Foreign Minister Zeev Elkin, who accompanied him to Moscow, gave some idea of the expectations:

“Our job is to try to sway the Russians, as we have been doing with all the players. Russia is not going to adopt Israeli positions wholesale. But any movement, even small, in the Russian position can affect the negotiations,” Elkin told Israel Radio.

However, a comment from Russian Foreign Minister Sergei Lavrov indicated that even a small movement might be wishful thinking.

Without ever mentioning Netanyahu by name, Lavrov referred to his warnings of a “historic mistake” that would win time for Iran to make a nuclear bomb, as “removed from reality.”

Lavrov has also suggested Iran was prepared to produce less enriched uranium and halt production of uranium enriched to a fissile concentration of 20 percent, a relatively short step away from weapons-grade material. Those are two of the concessions Western powers want Iran to make, but they fall far short of Netanyahu’s demands for shutting certain Iranian nuclear sites.

“We are addressing the sorts of problems which Israel has raised with us consistently and forcefully over a very long period of time,” a European diplomat involved in the Iran discussions told Reuters.

“You know, speaking honestly, I don’t think that there is a deal that we could remotely have done which would have Netanyahu coming up and saying, ‘Hmm, that’s pretty good.’ ”

The Israeli prime minister faces skepticism at home, as well. Justice Minister Tzipi Livni, a member of Netanyahu’s security cabinet, wondered how much leverage he could apply.

“Russia and China were the ones that, until now, did not take action to increase sanctions. It was very hard to enlist them to impose sanctions on Iran,” she told Israel Radio.

“Therefore it is hard for me to see how, suddenly today, they could be the ones to demand that the world be firmer with the Iranians.”

Netanyahu’s visit was actually planned before the Geneva talks were scheduled, but the fact that it is taking place just as the second round of talks resume, gives it special significance.

Netanyahu is scheduled to meet with Putin and both their advisors, to be followed by a one-on-one discussion. They will then issue statements to the press, followed by dinner.

Netanyahu will also brief senior Russian journalists and meet with the local Jewish leadership.  He is scheduled to fly back to Israel Thursday evening.

Meanwhile, on Wednesday, Iran interrupted its “charm offensive” to lash out at Israel and France, as Supreme Leader Ayatollah Ali Khamenei demonstrated that the departure of Mahmoud Ahmadinejad from the presidency does not mean the disappearance of anti-Semitism fromthe Iranian leadership.

“Zionist officials cannot be called humans, they are like animals, some of them,” said Khamenei.

“The Israeli regime is doomed to failure and annihilation,” he concluded.

Khamenei also criticized France, which has taken a tough stance in negotiations and whose prime minister is currently on a friendly visit to Israel. France, he said, was “not only succumbing to the United States, but they are kneeling before the Israeli regime.”

On Tuesday, Netanyahu confidant MK Tzachi Hanegbi  reflected on what the Jerusalem Post referred to as planning of the “day after” scenario in expectation of a done deal.

“We are not going on strike,” he said. “We will not do a sit-in. We will be more frustrated than before, because we were more optimistic that we would be able to convince some of the countries [in the P5+1] that this is the wrong path to follow, but we will go forward in our efforts to convince as many as possible.”

Hanegbi emphasized the importance of Netanyahu’s meeting with Putin even if it would have no dramatic impact on the talks in Geneva this week.

“Russia is a very important player, a key player, because out of the six countries [in the P5+1] it is the one with the most intimate relations with Iran. They built the reactor at Bushehr and are supplying Iran with weapons.

“They are very influential. Even though it might not have an effect on Geneva, we feel the dialogue between us and the Russians on this is enormously important,” Hanegbi said.

Hanegbi noted that dialogue with the Russians has not been futile, citing the Russians’ willingness to keep their S300 anti-aircraft missiles out of Syria.