Suicide bombers struck the Iranian Embassy on Tuesday, killing 23 people, including a diplomat, and wounding more than 140 others in a “message of blood and death” to Tehran and Hizbullah – both supporters of Syrian President Bashar Assad.

The double bombing in a Shiite district of Beirut pulled Lebanon further into a conflict that has torn apart the deeply divided country, and came as Assad’s troops, aided by Hizbullah terrosists, captured a key town near the Lebanese border from rebels.

The bombing was one of the deadliest in a series of attacks targeting Hizbullah and Shiite strongholds in Lebanon in recent months.

An al-Qaida-linked group said it carried out the attack as payback for Hizbullah’s backing of Assad forces against the mainly Sunni rebels as the Syrian civil war increasingly becomes a confrontation between regional powers.

The Syrian army’s border offensive is part of a larger government push that started last month and has seen forces loyal to Assad firmly seizing the momentum in the war, taking one rebel stronghold after another.

The attacks raised fears in Lebanon that Islamic extremists, now on the defensive in Syria, would increasingly hit back in Lebanon. The country is suffering the effects of competing sectarian loyalties.

“People fight outside (Lebanon), but send their messages through Lebanon. With bombs,” said a mechanic whose store windows were shattered by the blasts.

The midmorning explosions hit the neighborhood of Janah, a Hizbullah stronghold and home to several embassies and upscale apartments. 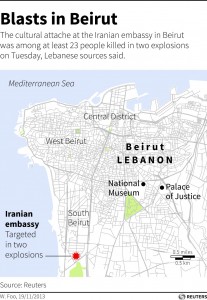 U.N. Secretary-General Ban Ki-moon condemned the attacks and called on all Lebanese to recognize that “such appalling and indiscriminate acts of violence” target everyone in the country, U.N. acting deputy spokesman Farhan Haq said.

Secretary of State John Kerry called the bombings “senseless and despicable,” and said “our hearts go out to the Iranian people after this violent and unjustifiable attack claimed the life of at least one of their diplomats.”

The dead Iranian was identified as Ibrahim Ansari, a 54-year-old diplomat who took up his post a month ago and was overseeing regional cultural activities, said Iranian Ambassador Ghazanfar Roknabadi, speaking to Hizbullah’s Al-Manar media station from inside the embassy compound.

Also among the dead was Radwan Fares, a Lebanese national who headed the facility’s security, according to a Lebanese official at the embassy who spoke on condition of anonymity because he was not authorized to give official statements.

Senior Hizbullah official Mahmoud Komati said at the scene that the attacks were a direct result of the “successive defeats suffered by (extremists) in Syria.”

Shiite Iran is the main Mideast backer of Assad’s government, believed to be providing it with key financing and weapons.

A Lebanese al-Qaida-linked group, the Abdullah Azzam Brigades, claimed responsibility for the attacks, saying they would continue until Hizbullah withdraws its forces from Syria.

The authenticity of the claim could not be independently verified. It was posted on a terrorist- linked website.

Hizbullah and Syrian officials indirectly blamed Saudi Arabia, the Sunni Arab kingdom that along with fellow Gulf nation Qatar has been a major backer of Syria’s rebels.

“Each of the terrorist attacks that strike in Lebanon, Syria and Iraq reek of petrodollars,” a Syrian government statement said, a clear reference to oil-rich Gulf Arab countries.

This article appeared in print on page 3 of the November 20th, 2013 edition of Hamodia.

Iran Will Respond to EU’s Nuclear Text by Midnight Monday

Ukraine Says Fighting ‘Deadlocked’ Ahead of Visit by U.N. Chief