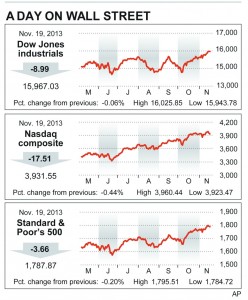 Electronics retailer Best Buy plunged after saying extended store hours and price-cutting could squeeze its fourth-quarter profit. Campbell Soup fell sharply after reporting that its profit slumped as sales of soups and V8 drinks fell. The two stocks were the biggest decliners in the Standard & Poor’s 500 index.

Even with the slight decline the S&P 500 is still up 25 percent so far in 2013 and has risen for six weeks straight, the longest winning streak since February. The extended run-up has prompted a number of market watchers to call for caution.

The Dow Jones industrial average and the S&P 500 crossed round-number milestones in early trading Monday but failed to build on those advances. The Dow crossed 16,000 and the S&P 500 hit 1,800 for the first time before falling back to close below those levels both Monday and Tuesday.

Retailers were a key focus on Tuesday, especially with the winter shopping season coming up. Black Friday  is one of the biggest shopping days of the year. Consumer spending is a critical component of the U.S. economy, so how consumers behave during the closely watched winter season will give investors a sign about the outlook for growth.

Home Depot rose 71 cents, or 0.9 percent, to $80.38 after reporting income that surpassed analysts’ expectations. The company also raised its earnings forecast for the year.

TJX Cos., which operates discount stores including T.J. Maxx and Marshalls, climbed 63 cents, or 1 percent, to $63.12. Its income rose 35 percent as sales improved at both U.S. and international stores.

Investors will turn their thoughts back to the Federal Reserve on Wednesday.

Minutes from the Fed’s October meeting will be released at 2 p.m. and investors will scour them to get a read on the central bank’s stimulus policy. The central bank is currently buying $85 billion of bonds a month to keep interest rates low and boost the economy. That has underpinned a rally in stocks.

Investors were also watching JPMorgan Chase. The bank reached a record $13 billion settlement with federal and New York State authorities, resolving claims over the bank’s sales of mortgage-backed securities that collapsed during the U.S. housing crisis.

This article appeared in print on page 39 of the November 20th, 2013 edition of Hamodia.