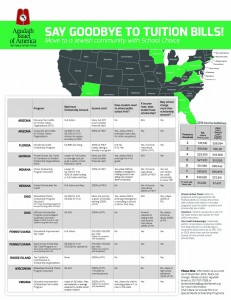 With the costs of education in most Orthodox communities showing no signs of coming down, an innovative report is seeking to connect families considering a move with yeshivah-friendly states that offer significant tuition relief without regard to whether the school is public, private or religious.

“Say goodbye to tuition bills,” headlines the report, which was prepared by Avrohom Dovid Motzen, Agudath Israel’s director of state relations. “Move to a
Jewish community with school choice.”

In an exclusive interview with Hamodia, Rabbi Motzen, who is generally identified as A.D. Motzen (he permitted Hamodia to reveal the secret behind his initials for this article), said he believes this is the first time an attempt has been made to prepare a chart connecting all information on state tuition programs that is relevant to yeshivah parents.

Educating children in Orthodox families in most heavily-populated Orthodox areas such as New York, New Jersey, California and Illinois, can cost between $5,000 and $15,000 a year per child, a burden that most families find crushing.

Organizations such as Agudath Israel and the Orthodox Union have facilitated goverment-funded relief such as Pell Grants and TAP, but that is geared only to students who are in beis medrash or kollel. For elementary-age and high school students, only services such as nurses, security, busing, certain mandated services and textbooks are provided by the government.

The reasons that states are so sparing when it comes to funding yeshivos — whose parent body pays the same school-funding property taxes as do public school parents — are varied. But they generally focus on two points: Blaine laws and union power.

Blaine laws, which prohibit the use of taxpayer funds for religious schools, were passed in many states during the anti-Catholic bigotry prevalent in the late 1800s. Since it is a constitutional amendment in New York State, a very high bar is needed to rescind them, a bar considered too high by school choice activists in the present political atmosphere.

The second reason is the powerful teachers’ union, which worries that money placed in the private school jar is money taken away from their membership. The unions’ vast political fundraising ability, along with their large memberships that translate into a lot of election clout, has made many elected officials fearful of allocating funds for private schools.

However, a movement over the past few years to diminish the power of unions has made a difference in at least eight states, which have already passed substantial tuition aid laws guaranteeing education equality for all children.

In his chart, Rabbi Motzen compares the states’ school choice laws and their income requirements, and presents eligibility requirements in an easy-to-read format. He warns, though, that there are other decisions involved in moving to a different state, such as housing, jobs and religious infrastructure.

But he says that the report makes an important factor in the decision to move easier to comprehend.

Most of the states on the chart fund scholarships indirectly by offering state tax credits to individuals and businesses who donate to specific nonprofit organizations. These organizations pool the donations and then award scholarships to eligible students.

In some states, such as Indiana, Ohio, and Wisconsin, vouchers are funded directly by the state. In some cases, the student has to attend a public school before becoming eligible for a voucher. Rabbi Motzen’s chart only includes programs such as Milwaukee, where there is no “prior public school” requirement, or where there is at least an exception for students entering kindergarten.

For example, Cincinnati, Ohio, students who move from out of state and are entering kindergarten through sixth grade would be eligible this coming year because the public school they would be assigned to is considered low-performing.

On the other hand, Cleveland-area students are benefiting from a new program which is based solely on income. However, it is only being phased in one grade at a time starting this year with kindergarten.

And in states such as Florida, Pennsylvania, Virginia, and Rhode Island, if the parents’ income rises above a certain level (tied to the federal poverty level or lunch program), they are knocked off the scholarship credit. And most of these states allow schools to charge more than the tax credit or voucher, throwing an additional uncertainty into the mix.

The chart is prepared specifically for Orthodox families. So, for example, it does not include Oklahoma’s tax credit program since there are no yeshivos there. All information is relevant as of November 2013.

But ask Rabbi Motzen for the bottom line — “Which state should I move to if tuition were the overriding factor?” — and you will not get an answer. There is no single state that offers the best value for all parents, Rabbi Motzen says. Each family must research its options and decide what fits best.

“It depends what you’re looking for,” Rabbi Motzen says. “There is no gold standard.”

The idea of moving to a state that provides education equality has already convinced Berish Edelman — ironically, the one who did the graphics design for Rabbi Motzen’s report — to take tuition into account when planning his place of residence.

Mr. Edelman was living in Providence, R.I., with his wife Chaya until two years ago. In 2011, they started to look for a place with a more affordable cost of living.

“We checked out many, many communities, and went for Shabbos to several [cities],” Mr. Edelman told Hamodia. “We ultimately decided on Cincinnati [since] I wanted to be able to keep my [learning] sedarim while also working as a graphic designer. The tuition vouchers were part of what made that feasible.”

The Edelmans, both 29, and their four children, now live in Cincinnati. He works as a graphic designer for many clients around the country  and she is a speech therapist. They are eligible for a tuition voucher of $4,250 per child, an amount that will grow to $5,000 when their young children enter high school.

The report was first conceived ahead of an address Rabbi Motzen gave in South Bend, Ind., about a month ago. He started to put the report together, fine-tuning it over the past few weeks.

It was publicized for the first time at this past weekend’s Agudah convention, when Rabbi Motzen gave a short presentation about it Sunday morning.

Feedback is trickling in, Rabbi Motzen says. He got a call from Yaakov Ausch of Boro Park, a yungerman who says he has been telling his network of friends from a cross-section of Yiddishkeit that sticking to the same communities that their grandparents lived in when they moved to the United States is unsustainable.

“You could think that the Torah was given in New York and New Jersey and you’re not allowed move out of those places,” Mr. Ausch  told Hamodia.

Mr. Ausch, a 44-year-old real estate broker, is discussing with a group of about 15 friends moving en masse to a yeshivah-friendly state. He says that he earns a good salary, but the dual burdens of high housing and tuition costs are a substantial chunk of his budget.

Conservative education experts praised the study as highlighting a problem of tuition inequality.

Yehoshua Bedrick, an Orthodox Jew who is a policy analyst with the Cato Institute’s Center for Educational Freedom, said that people need not wait for the inequality to be solved in states currently hosting the majority of Orthodox Jews.

“Voters should support efforts to expand educational opportunities, but if states don’t respond then I fully endorse the idea that parents should move out of areas like New York City, where there are limited educational options, and relocate to places like Arizona where there’s school choice,” Mr. Bedrick said.

The former New Hampshire state legislator currently lives in Arizona — partly to be near his wife’s family and partly on account of its tuition aid program for yeshivos, he says.

“For us it’s not as much about that concept of choosing to attend a public school or a private school, for most people it’s, ‘I want to afford the school of my choice,’” Rabbi Motzen says. “It’s not about choosing the school, it’s about affording that choice.”

This article appeared in print on page 1 of the November 20th, 2013 edition of Hamodia.