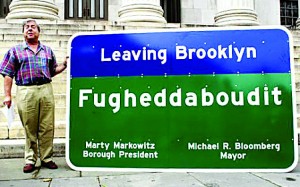 Marty Markowitz has made Brooklyn an international brand over his 12 years as borough president, with his “Leaving Brooklyn?  Fuggedaboutit” signs and his injecting pun-filled releases about Brooklyn into national events.

As the term-limited Markowitz leaves office, two council members are proposing that he be selected as the grandly titled “Ambassador for New York City,” an exotic takeoff of an existing position that serves to promote the Big Apple on the global stage.

Markowitz told Politicker in a statement that he was excited over the idea but appeared unsure of what the job would entail.

“It is flattering that two of my colleagues in government would think of me in such esteem,” he said. “I look forward to whatever role I may take in continuing to serve to my borough and my city in the next chapter of my life.”

Public Advocate-elect Letitia James and Councilman David Greenfield on Monday called on Mayor-elect Bill de Blasio to name Markowitz as commissioner of the Office for International Affairs and to rename the position as Ambassador for NYC.

“It would be a great loss to the city of New York — specifically the borough of Brooklyn which loves Marty Markowitz — to lose his influence and expertise in the city sector,” said James, a councilwoman from Flatbush.

“Marty Markowitz has dedicated his life and career to fighting on behalf of his beloved borough and city and making life here better for everyone,” Greenfield said. “There is no question that we are losing an invaluable asset who possesses institutional knowledge about municipal and civic matters when Mr. Markowitz leaves office.”

The Office for International Affairs was originally created by Mayor Robert Wagner in 1962 to serve as a liaison between the U.N. diplomatic community which is based in the city, and local residents, businesses and government. It also oversees the city’s relationships with its “sister cities” around the world.

This article appeared in print on page 6 of the November 19th, 2013 edition of Hamodia.