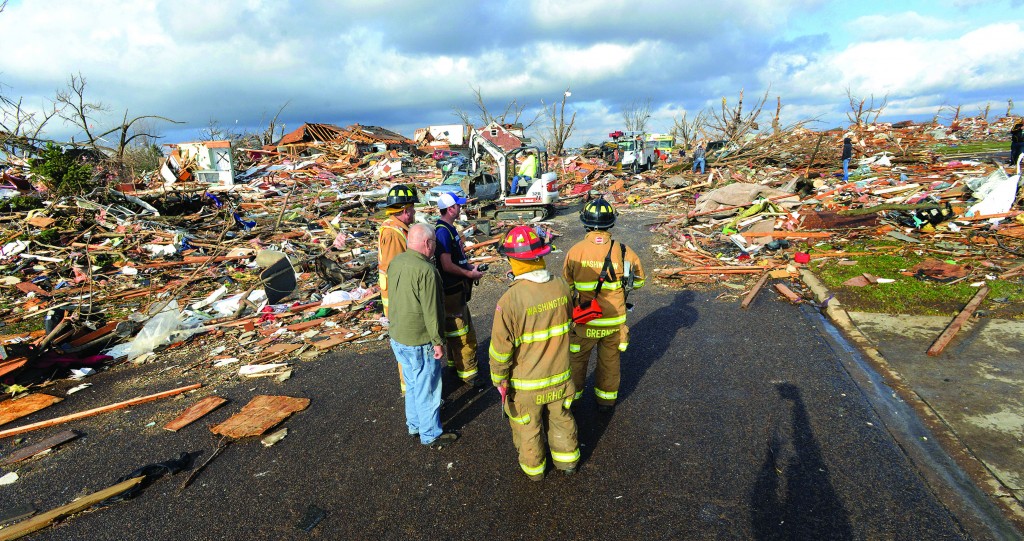 Mark Styninger, the coroner of Washington County in southern Illinois, said an elderly man and his sister were killed around noon when a tornado hit their home in the rural community of New Minden.

In central Illinois, the town of Washington appeared particularly hard-hit, with one resident saying his neighborhood was wiped out in a matter of seconds by a tornado.

“I stepped outside and I heard it coming. My daughter was already in the basement, so I ran downstairs and grabbed her, crouched in the laundry room and all of a sudden I could see daylight up the stairway and my house was gone,” Michael Perdun said Sunday afternoon in an interview with The Associated Press on his cellphone. “The whole neighborhood’s gone, (and) the wall of my fireplace is all that is left of my house.”

By mid-afternoon it remained unclear how many people were hurt. In a news release, the Illinois National Guard said it had dispatched 10 firefighters and three vehicles to Washington to assist with “immediate search and recovery operations in the tornado damaged area.”

And Steve Brewer, chief operating officer at Methodist Medical Center of Illinois in Peoria, said that four or five people had come to the hospital seeking treatment, but he described their injuries as minor. He said another area hospital had received about 15 patients, but did not know the severity of their injuries.

Brewer said doctors and other medical professionals were setting up a temporary emergency care center to treat the injured before transporting them to area hospitals.

About 90 minutes after the tornado destroyed homes in Washington, the storm darkened downtown Chicago.

Just how many tornadoes hit was unclear Sunday afternoon. According to the National Weather Services’ website, a total of 59 tornadoes had struck, the bulk of them in Illinois. But meteorologist Matt Friedlein said the total might fall because emergency workers, tornado spotters and others often report the same tornado.