President Barack Obama bowed to political pressure over his signature health-care reform on Thursday, announcing that he would allow insurers to extend for one year policies that have been canceled, even if they do not comply with the law.

But insurers immediately raised doubts about how the proposal would work.

The October 1 rollout of the program known as Obamacare has been beset by technical problems with the main website and cancellations of existing policies because they do not meet the higher standards of the 2010 health-care law.

Obama said on Thursday that to fix the problem of some health insurance coverage cancellations since online marketplaces opened, insurers could renew those plans for a year.

The move was in response to a tide of anger from Republicans and fellow Democrats that Obama was not fulfilling his frequent promise that people who like their current health plans would be able to keep them under Obamacare.

The fracas has allowed critics to question Obama’s credibility and reignited a broad debate about the benefits of the health system overhaul, forcing Obama to give a sweeping apology to Americans on Thursday.

“I think it’s legitimate for them to expect me to have to win back some credibility on this healthcare law in particular and on a whole range of these issues in general,” Obama said during a press conference.

Several million Americans have received cancellation notices because insurers did not renew policies that were protected because they predated the 2010 law, or because they were made after the law was enacted.

The problem has been compounded by the fact that HealthCare.gov, the federal website where Americans can shop for new insurance plans, has been plagued by technical difficulties.

But it is unclear whether the fix announced on Thursday will prevent a large number of policies from being canceled or soothe Democrats concerned that the botched rollout has damaged their standing in 2014 re-election fights.

It will be up to state insurance commissioners to allow the Obamacare fix to go ahead, and it will be up to insurers whether to renew plans that have already been canceled.

“Changing the rules after health plans have already met the requirements of the law could destabilize the market and result in higher premiums for consumers,” said Karen Ignani, president and chief executive officer of America’s Health Insurance Plans, the lobbying arm of the insurance industry.

The National Association of Insurance Commissioners said in a statement that it was unclear how Obama’s proposal on canceled policies can be put into effect. 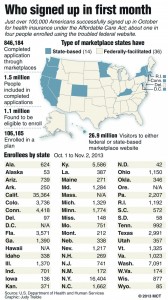 Obama’s move was designed to short-circuit a push for more far-reaching changes in Congress and end a growing revolt by Democrats worried the cancellations, as well as the broken website, would threaten their re-election bids in 2014.

Obama said he “fumbled” the debut of the Affordable Care Act and let down Democratic supporters who put their political careers on the line to back the president’s signature domestic policy.

“There is no doubt that our failure to roll out the ACA smoothly has put a burden on Democrats, whether they’re running or not, because they stood up and supported this,” Obama said. “I feel deeply responsible for making it harder for them, rather than easier for them.”

The Affordable Care Act aims to provide health benefits to millions of uninsured Americans. It mandates that most Americans be enrolled for health coverage by March 31 or pay a fine.

Republicans have opposed the healthcare law as an unwarranted expansion of the federal government, and Republicans in the House of Representatives have repeatedly tried to repeal or restrict the law.

On Thursday, U.S. House of Representatives Speaker John Boehner, a Republican from Ohio said he doubted Obama could fix the law with administrative changes.

“The only way to fully protect the American people is to scrap this law once and for all,” Boehner told reporters.

The House will vote on Friday on a bill by Republican Fred Upton of Michigan to allow insurers to offer canceled plans, but Democrats objected it would undermine the market and drive premiums up by allowing insurers to offer plans to new customers. Democrats said they will offer their own alternative approach.

Enrollment figures released by the administration on Wednesday indicated that only 106,000 people have enrolled for health plans through the exchanges, a tiny fraction of the hoped-for millions.

The low figure, while expected because of technical glitches on the government website, showed how far the administration has to go to build an individual market of millions of consumers in 2014 to keep the healthcare program financially viable.

This article appeared in print on page 1 of the November 15th, 2013 edition of Hamodia.