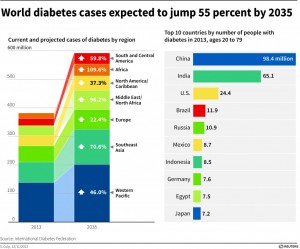 The world is losing the battle against diabetes as the number of people estimated to be living with the disease soars to a new record of 382 million this year, medical experts said on Thursday.

The vast majority have Type 2 diabetes — the kind linked to obesity and lack of exercise — and the epidemic is spreading as more people in the developing world adopt Western, urban lifestyles.

The latest estimate from the International Diabetes Federation is equivalent to a global prevalence rate of 8.4 percent of the adult population and compares to 371 million cases in 2012.

By 2035, the organization predicts, the number of cases will have soared by 55 percent to 592 million.

“The battle to protect people from diabetes and its disabling, life-threatening complications is being lost,” the federation said in the sixth edition of its Diabetes Atlas, noting that deaths from the disease were now 5.1 million a year, one every six seconds.

People with diabetes have inadequate blood sugar control, which can lead to a range of dangerous complications, including damage to the eyes, kidneys and heart. If left untreated, it can result in premature death.

“Year after year, the figures seem to be getting worse,” said David Whiting, an epidemiologist and public health specialist at the federation. “All around the world we are seeing increasing numbers of people developing diabetes.”

He said that a strategy involving all parts of society was needed to improve diets and promote healthier lifestyles.

The federation calculates diabetes already accounts for annual healthcare spending of $548 billion and this is likely to rise to $627 billion by 2035.

An estimated 175 million of diabetes cases are as yet undiagnosed, so a huge number of people are progressing toward complications unawares. Most of them live in low- and middle-income countries with far less access to medical care than in the United States and Europe.

The country with the most diabetics overall is China, where the case load is expected to rise to 142.7 million in 2035 from 98.4 million at present.

But the highest prevalence rates are to be found in the Western Pacific, where more than a third of adults in Tokelau, Micronesia and the Marshall Islands are already living with the disease.

Pharmaceutical companies have developed a range of medicines over the years to counter diabetes but many patients still struggle to control their condition adequately, leading to a continuing hunt for improved treatments.

This article appeared in print on page 3 of the November 15th, 2013 edition of Hamodia.