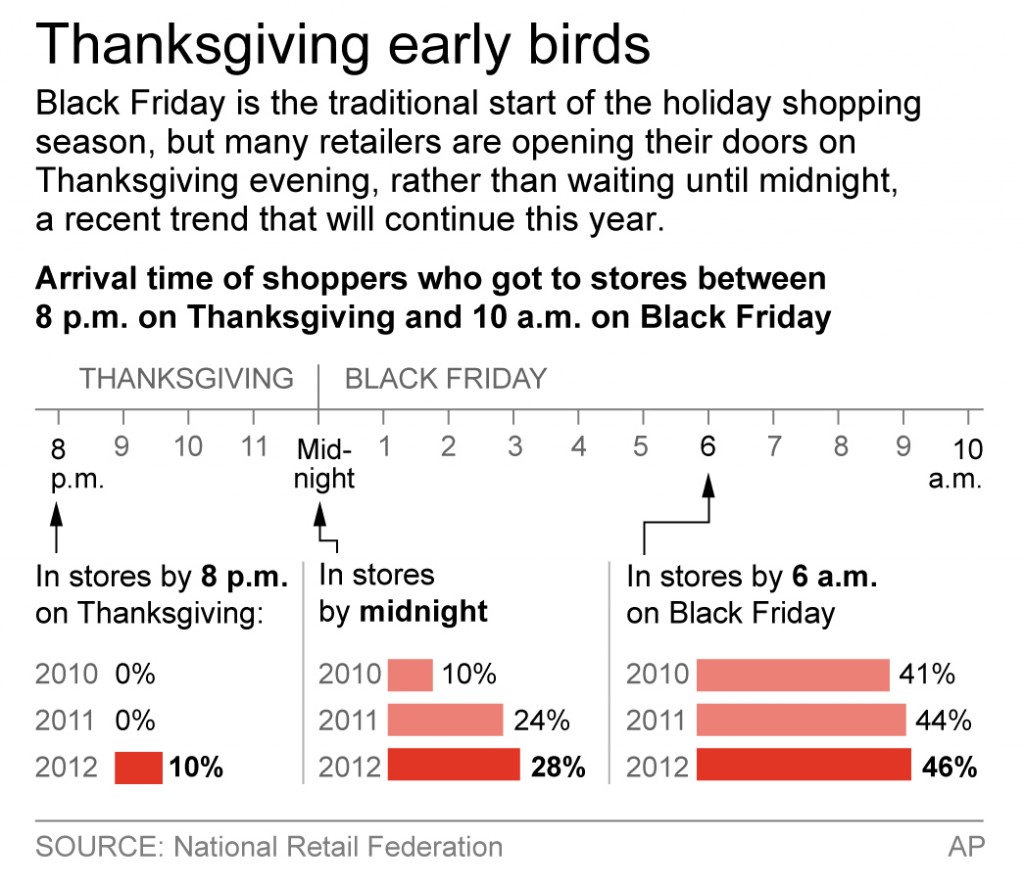 Wal-Mart Stores Inc. said Tuesday that it will start offering its holiday deals at 6 p.m. on Thanksgiving at its stores — two hours earlier than last year.

The world’s largest retailer will stagger deals throughout the night and into “Black Friday,” the day after Thanksgiving that’s traditionally the busiest shopping day of the year.

The company also said that it will increase its stock of electronic items and double the number of tablet computers for sale that weekend. It’s also bulking up the list of guaranteed popular items that it will sell in designated sections of its store to 21, from three last year.

Wal-Mart is responding to what’s expected to be a fiercely competitive year-end shopping season. Black Friday has traditionally been the official kickoff to the period, but in the last few years, that start has crept into Thanksgiving. This year, stores including Macy’s Inc., J.C. Penney Co. and Kohl’s Corp. are opening for the first time on Thanksgiving evening. And other stores, including Best Buy Co., announced earlier hours on Thanksgiving.

Most of Wal-Mart’s 4,000 U.S. namesake stores are already open 24 hours year-round. But the company is concentrating on offering holiday deals on Thanksgiving.

During a media call Monday, Duncan MacNaughton, executive vice president and chief merchandising and marketing officer at Wal-Mart’s U.S. namesake division, said the discounter carefully studied the competitive landscape when it decided to start the deals earlier, at 6 p.m. Thanksgiving.

“Everyone’s moved up this year, so it will be a new dynamic,” MacNaughton said.

For online shoppers, Wal-Mart will be offering special deals starting Thanksgiving morning, some of which will be the same as those offered at the sales events at the stores later in the evening.

The stakes are high for retailers, since the year-end season accounts for up to 40 percent of their annual revenue. The National Retail Federation, the nation’s largest retail trade group, expects an increase of 3.9 percent, to $602.1 billion, in holiday sales.