World This Year’s Atlantic Storms No Match for Haiyan
World 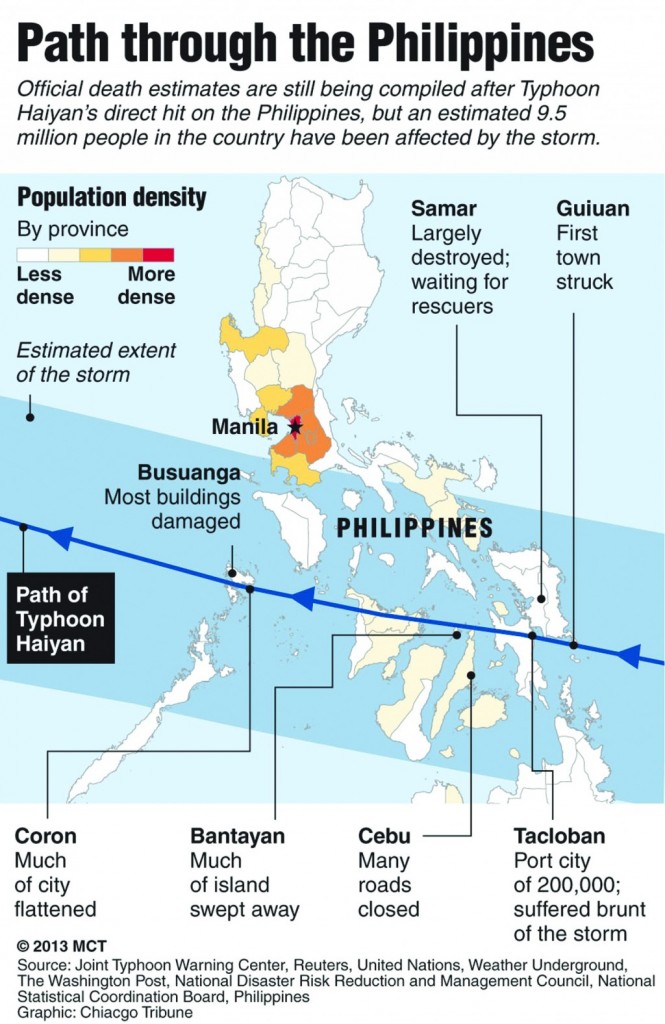 In a display of enormous tropical power, Super-Typhoon Haiyan packed more energy than the sum total of all 12 named storms — including two hurricanes — that have formed so far in the Atlantic this hurricane season.

That shows not only how intense the single 195-mph Pacific system was, but also how “wimpy” the storm season has been in the Atlantic, said Jim Lushine, a retired National Weather Service forecaster and tropical expert.

“Super-typhoons in the western Pacific are much more frequent than hurricanes of equal strength in the Atlantic,” he said. “This is, at least in part, due to the fact that the Pacific is a much larger expanse of warm ocean water.”

Haiyan’s winds were gusting to 235 mph three hours before landfall, “making it the fourth-strongest tropical cyclone in world history,” said Jeff Masters, chief meteorologist of Weather Underground, an online weather site. While the death toll still is being tabulated, it’s feared more than 10,000 people were killed.

Another indicator of Haiyan’s power: It was 22 mph stronger than Hurricane Andrew, which struck Florida’s Miami-Dade County as a Category 5 system with top winds of about 173 mph in August 1992, Lushine said.

The Atlantic basin, on average, produces 12 named storms, including six hurricanes. The northwest Pacific Ocean, on the other hand, is the world’s most active basin with an average of almost 26 storms per year, including 16 typhoons. With incessantly warm waters, it can produce storms year around, although activity drops off in February and March.

The Joint Typhoon Warning Center, that region’s version of the National Hurricane Center, estimated Haiyan’s winds to be 195 mph as it approached Samar Island and the city of Guiuan, where the super- typhoon initially made landfall.

However, Masters said that speed was valid only for the part of the storm that was over water, and that winds probably were about 165 over land “due to friction.” He noted that still was strong enough to cause enormous destruction.

“This is equivalent to a high end EF-3 tornado, he said.