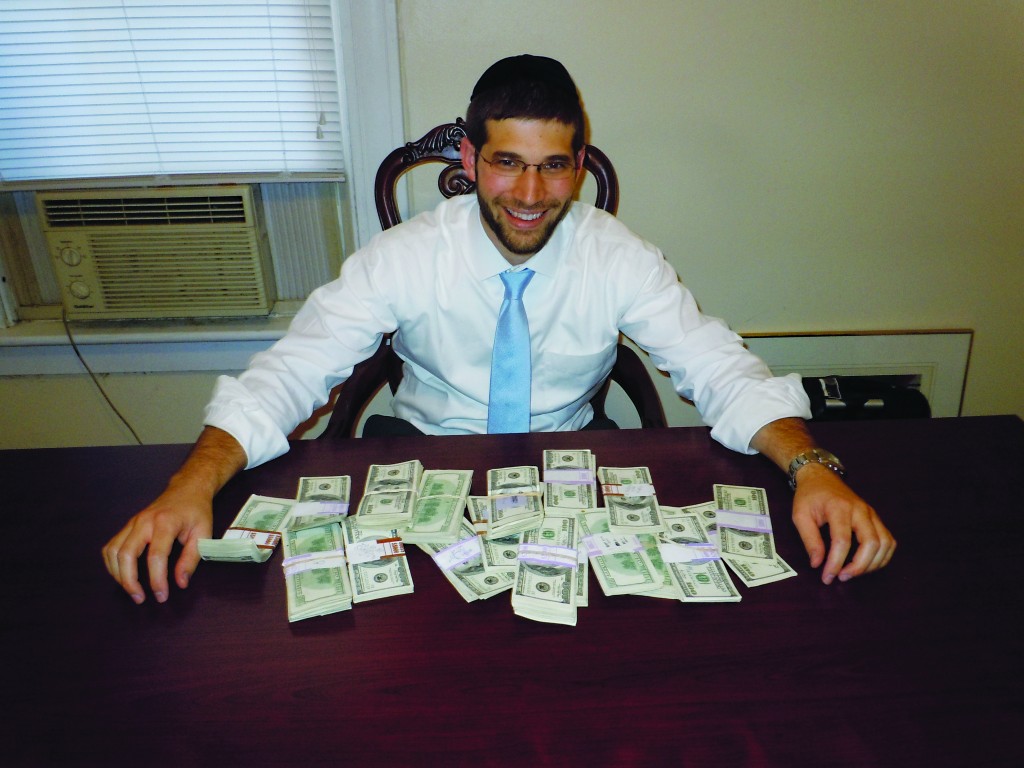 A yeshivah rebbi who found $98,000 in a used desk he bought online returned it to its owner, prompting a wave of thanks from the owner and kudos in the national press to the rabbi who gave up a fortune in the name of integrity.

While the story occurred two days before Rosh Hashanah, Rabbi Noach Muroff, a Canadian-born rebbi at Connecticut’s Yeshivah of New Haven, agreed to publicize the story after meeting a Gadol at a Torah Umesorah convention two weeks ago. Hearing the story, Harav Shmuel Kamenetsky, the Rosh Yeshivah of Philadelphia Yeshivah, told him that it was his duty to spread the kiddush Hashem in the media.

Rabbi Noach Muroff, 28, says  he was gratified by the way the story was received. He has been getting nonstop calls and texts from friends and family, and even his new ninth-grade students at the Yeshivah of New Haven were more attentive for a while.

“How can a person not jump at an opportunity like this?” he says. “What are we here for?”

Noach and his wife Esther purchased an executive desk online on Sept. 2 for $150 from a woman he described as “a nice, down-to-earth, honest woman in her 50s,” who does not wish to identify herself beyond her first name, Patty. He loaded the desk onto his van and took it to his New Haven home.

However, when Rabbi Muroff, his wife and a friend tried pushing it into the door of his bedroom, it came up a quarter of an inch too short. Frustrated, they started taking the desk apart. Behind the two side drawers, they discovered a bag. Opening it, the Muroffs were shocked to discover more hundred dollar bills than they had ever seen in their entire lives.

“This scene happens only in the movies,” Rabbi Muroff recalled telling his wife. “We were just laughing, we couldn’t believe that this was actually happening.”

They got down to counting the money, and before long were looking at close to $100,000. But the thought of keeping it never occurred to the religious couple. (Noach has been a Mesivta rebbi for five years and Esther runs the yeshivah’s website and helps Rabbi Eliezer Greer catalogue thousands of kevarim at a local beis hachaim.)

Rabbi Muroff says that much credit for the decision to return it belongs to his wife, who grew up as Esther Mitchell from Chicago.

There was no question about whom the money belonged to — the seller had mentioned specifically that she had purchased supplies from Staples and built the desk herself.

That night, at about 11:30 p.m., they called the woman and informed her of the find.

Speechless initially, the woman said that she had been in emotional distress over the recent passing of both of her parents, and stuffed her entire inheritance into the desk instead of her bank account. She had searched for it but it did not occur to her that the fortune had slipped behind the drawers.

“She was in total shock; she was just beyond words,” Rabbi Muroff recalled.

The Muroffs decided to make this a teachable moment for their four children, Chana Reizel, 6, Elisheva, 4, Yosef Shalom, 3, and Pinchos Dov, 1. They brought them along the next day on the drive to Patty’s home, trying to give them a perspective of how much money $98,000 is. They also agreed to turn down any reward they might be offered.

But Patty insisted that they take a cash reward — a sum Rabbi Muroff declined to name. She returned the $150 he paid for the desk, together with a “sizeable sum” for the couple, and more money for each of the four children.

“I do not think there are too many people in this world who would have done what you did,” Patty wrote in a letter accompanying her gift. “I do like to believe that there are still good people left in this crazy world we live in. You are certainly one of them.”

Their kiddush Hashem complete, the Muroffs debated responding to a CNN invitation to broadcast their story. “My wife and I, we’re quiet people,” Rabbi Muroff admits.

But at Torah Umesorah’s New England regional convention two weeks ago, they told the story to Harav Shmuel Kamenetsky, who advised them to go to the media.

At the end of the broadcast, the video zooms in on the Gemara Brachos on Rabbi Muroff’s new desk, with the words, “The Rabbi tells me, ‘The most important thing in life is to be honest.’”