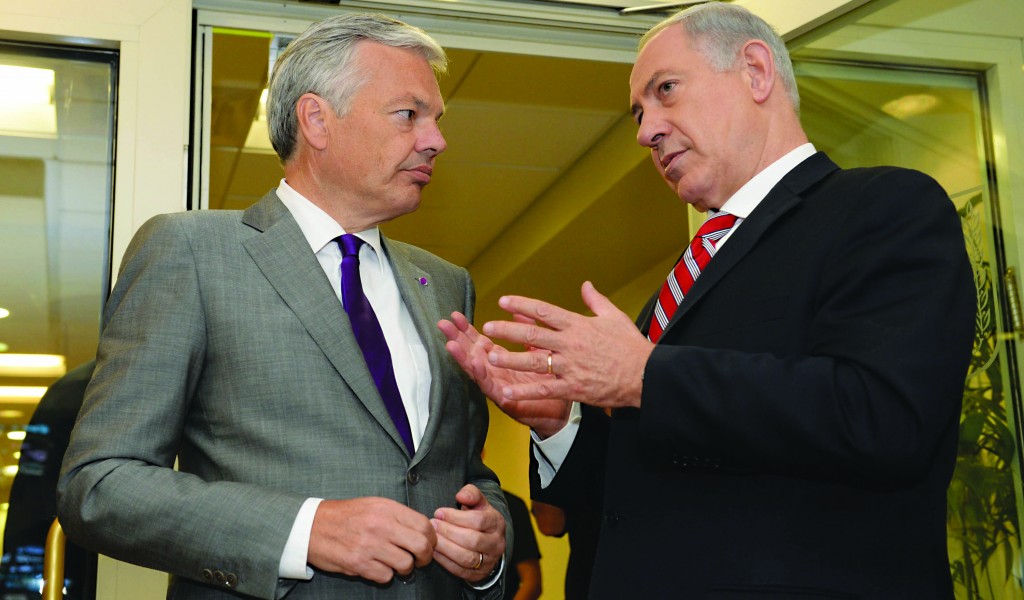 The United States and Israel were pulling back from the brink of an open rift on Monday, as both Israeli Prime Minister Binyamin Netanyahu and Secretary of State John Kerry moderated their heated rhetoric about Iran.

“Our common goal, that of the U.S., Europe, China and Russia is to prevent Iran from developing a military nuclear capability,” Netanyahu said at the start of a meeting with Belgian Foreign Minister Didier Reynders in Yerushalayim on Monday.

“I think it’s time to improve the deal. Iran is on its knees economically and it’s possible to get a better deal. Before the sanctions are lessened, get a good deal, not a bad deal,” he added.

Earlier in the day, Kerry sought to reassure skeptics that the U.S. is not rushing foolishly into anything that would endanger its allies.

“This is not a race to complete just any agreement,” Kerry told a news conference during a visit to the United Arab Emirates, saying that such an agreement was likely to be months away.

Thumping the podium to make his point, Kerry reiterated that President Obama had pledged “that he will continue to defend his friends and allies in this region, the UAE, Saudi Arabia, others, he will defend them against any external attack.”

However, the American diplomat also stressed that he believes criticism of a deal is premature. “The time to oppose [a deal] is when you see what it is,” Kerry told reporters in Abu Dhabi, in what appeared to be a reference to Netanyahu’s strenuous opposition.

On Sunday, Kerry said that Netanyahu was not fully informed on the agreement in the works.

“I’m not sure that the prime minister, who I have great respect for, knows exactly what the amount or the terms are going to be because we haven’t arrived at them all yet,” Kerry said on NBC’s Meet the Press. “That’s what we’re negotiating. It is not a partial deal. Let me make that crystal clear,  as I have to the prime minister directly. It is a first step in an effort that will lock the program in where it is today, in fact set it back, while one negotiates the full deal.”

Netanyahu insisted in an interview on CBS that he wasn’t lacking information. “The deal as was proposed and described to us by American sources … means that Iran maintains its capability to enrich material for nuclear bombs, it also maintains another route — the plutonium heavy water route — to make nuclear bombs. All Iran gives is a minor concession of taking 20 percent enriched uranium and bringing it down to a lower enrichment, but that they can cover within a few weeks, given the capabilities that they keep for enrichment.”

Meanwhile, a U.S. delegation led by Undersecretary of State Wendy Sherman arrived in Israel on Sunday for consultations on negotiations with Iran.

Sherman left late Sunday night without reaching an understanding with Israel on the position being taken with Tehran, Army Radio reported Monday morning.

A senior American official who was privy to the meeting told reporters afterward that while the United States and Israel differ on tactics, Washington remains committed to the larger strategic goal of preventing Iran from acquiring a nuclear weapon.

“The United States and Israel have worked very closely and consulted often in the way to proceed forward. Some days we may disagree on tactics,” the senior official said, “but we absolutely agree on the objective and we absolutely agree that we need a comprehensive agreement and we hope to get one very soon.”

Protestations to the contrary notwithstanding, a senior Israeli official was quoted by The Times of Israel as saying that the U.S. was in a rush to reach an agreement with Iran for fear that the window of opportunity will soon close, leaving military action as the only option.

Former Middle East analyst for the State Department, Aaron David Miller, wrote on CNN that “the gap between the United States and Israel is real. And it should neither be trivialized nor exaggerated. But short of a final deal in which Iran abandons its nuclear ambitions, it may not be bridgeable. These two allies will need to manage it as best they can.”

Miller attributes the bilateral split to a difference of perspectives: for Israel it’s a matter of survival, while the United States faces no comparable existential threat. This gives rise to the dispute over a timetable.

He identifies an inherent difficulty in any interim agreement with Tehran — a final one right off is apparently not obtainable at this juncture — namely, that it will give the regime time to reach Netanyahu’s red line for making a bomb. Netanyahu refuses to stand by and wait for that; and Kerry probably sees no other way.

“There are no happy or perfect endings here,” Miller concludes. “At best, the choice is between an imperfect interim agreement that buys six months to determine whether Iran is prepared to give up its quest for a nuclear weapons capacity, or no agreement and an inevitable slide toward military confrontation.

“As of now, the United States sees the advantage of the former; Netanyahu doesn’t. The United States has no stake in concluding an agreement with Iran that leaves Israel angry, aggrieved and vulnerable. So, the two sides will find a way to work this through. But for now, buckle your seat belts. We could be in for one bumpy ride.”