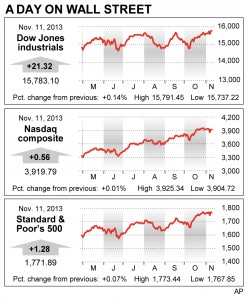 The market edged higher from Friday, when it got a lift from an unexpectedly strong U.S. jobs report for October. The surge in hiring made investors more optimistic that the U.S. economy is getting stronger.

Stock trading volume was among the lowest of the year, and bond markets were closed for Veterans Day. Traders on the floor of the New York Stock Exchange held a moment of silence in observance of the holiday.

The Dow has advanced for five straight weeks and is up 20 percent so far this year. The last time the Dow had a bigger gain for a whole year was 2003, when it rose 25 percent.

Other major indexes have also surged. Stocks have been propelled higher this year by economic stimulus from the Federal Reserve, a gradually improving economy and rising company earnings.

Given that the market is “up hugely” this year, investors may be hesitant to put more money into stocks, said Andres Garcia-Amaya, a global market strategist at JPMorgan Funds. “At the same time, I don’t think people are going to leave at this point,” he said.

Investors have put $12.7 billion into U.S. stock mutual funds this year, after pulling money out of the stock market in each of the past five years, according to Investment Company Institute data.

Stocks can rise further from these levels, but the market’s rate of ascent will likely slow given the big gains over the last four and a half years, said Phil Orlando, chief equity market strategist at Federated Investors. The S&P 500 is up more than 160 percent since bottoming out in March 2009.

“The easy money has been made,” said Orlando. “We can continue to go higher, but that process is going to be a grind over the next couple of years.”

Investors this week will look for evidence that Americans are ready to start spending for the holidays. Macy’s, Wal-Mart, Nordstrom and Kohl’s are scheduled to report their quarterly results.

About 90 percent of companies in the S&P 500 have released their third-quarter earnings, and the majority beat the expectations of Wall Street analysts, according to data from S&P Capital IQ.

Yellen’s testimony “is coming at an important inflection point,” for financial markets, as the Fed considers pulling back on its stimulus, said Quincy Krosby, market strategist at Prudential Financial. The Fed is currently buying $85 billion of bonds every month and holding its benchmark interest rate close to zero to stimulate economic growth.

“The market will be looking for any clues” about the Fed’s policy going forward, Krosby said.

The yield on the 10-year Treasury note jumped last week to 2.75 percent, the highest in six weeks, after the government reported last month’s surge in hiring.

This article appeared in print on page 8 of the November 12th, 2013 edition of Hamodia.