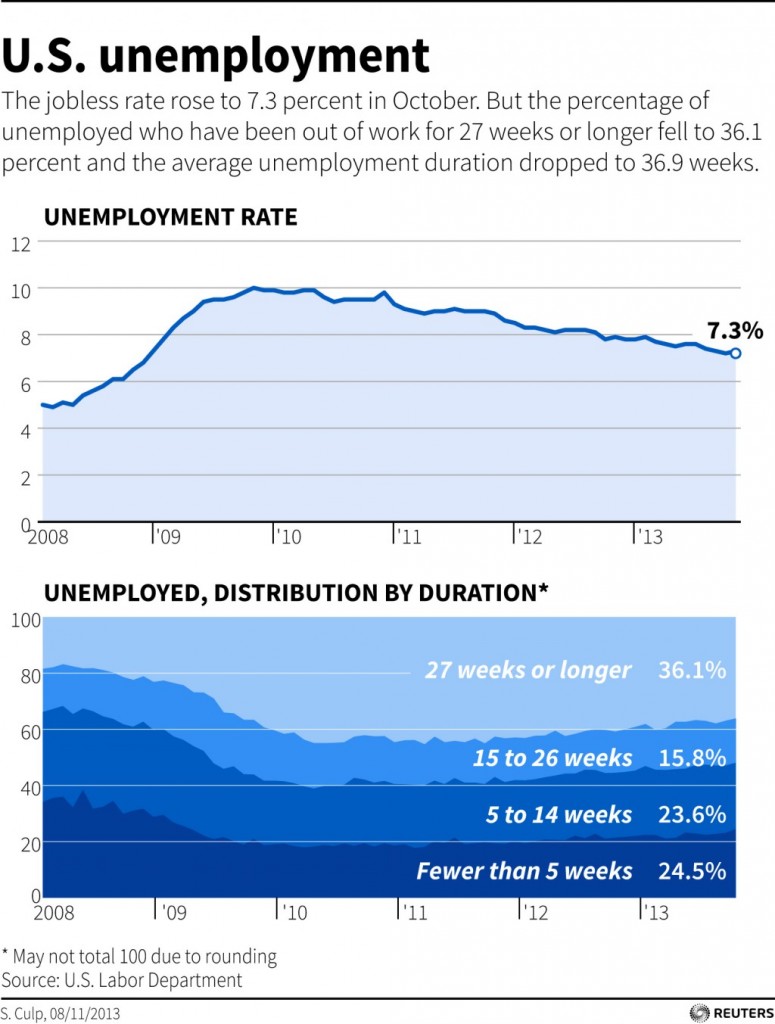 The government shutdown may have affected October’s jobs numbers. But not how you think.

For weeks, the White House had braced for a dour report on hiring, with economists and aides lowering expectations and blaming last month’s partial shutdown for the inevitable bad news to come.

Then Friday’s numbers materialized: Employers appeared to have ignored the shutdown and hired away, to the tune of 204,000 jobs in October.

The shutdown, it seemed, had had no effect.

But not so fast.

In the height of irony, the 16 days of federal worker furloughs and government disruptions may have helped, not hurt, the improved jobs picture.

Typically, jobs numbers are announced on the first Friday of the month. Because of the shutdown, the Bureau of Labor Statistics delayed the release of the jobs numbers by one week, to allow more time to collect payroll and household data. That extra time resulted in an above-average response rate for payroll data.

So, not to get hung up on numbers, but the average participation rate by employers in payroll surveys for the nine months before October was 76.4 percent. That meant that in subsequent months, as more data was collected, the hiring numbers were adjusted, often upward.

In October, with an extra week to collect data, the participation rate was 83.5 percent, the highest ever.

“It seems that when the initial response rate is high, the initial payroll number is often, though certainly not always, stronger than the prior trend,” Ian Shepherdson, chief economist at Pantheon Macroeconomics, wrote in a research note.

“Tentatively, we think the effect of this could explain all the overshoot in payrolls,” Shepherdson wrote.

As a result, some economists are predicting that when the October numbers are updated, they might be in for a downward revision, and that November could yield a lower number as well.

“Businesses may have inadvertently counted employment for an extra week,” said Mark Zandi, chief economist at Moody’s Analytics. “That could juice up the number. That may mean that we actually get surprised next month with a much weaker number.”

The shutdown had another effect on the employment data.

Besides conducting a survey of employers, which gives data on actual hiring, the government also surveys households to determine the unemployment rate.

Complicating things, some furloughed employees were counted as still employed. As a result, if they had been properly listed as unemployed, the jobless rate for October could have been higher than 7.3 percent.

But those are temporary anomalies, and they won’t affect the November unemployment rate.

Even with data showing more hiring in the month, President Barack Obama on Friday stuck with the White House theme that the shutdown “harmed our jobs market.”

“The unemployment rate still ticked up and we don’t yet know all the data for this final quarter of the year, but it could be down because off what happened in Washington,” he said.

The data did have some warnings. Americans’ participation in the labor force went down.

“Even factoring out the impact of the shutdown, we have a lot fewer people in the labor force than you’d expect,” said Jared Bernstein, senior fellow at the Center on Budget and Policy Priorities and former economic adviser to Vice President Joe Biden. “That pushed the unemployment rate down because they are not looking and it takes away from growth.”

Then he apologized for being a two-handed economist:

“I consider the (jobs) report evidence of a resilient American economy on the one hand, but some pronounced remaining weaknesses on the other.”