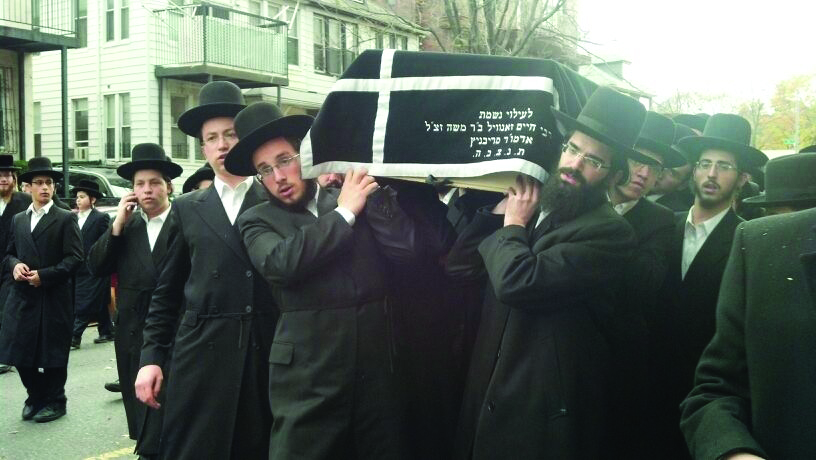 Where does one go for consolation on a day like this? Rabbi Meir Pilchick, z”l, a man whose name was synonymous with vitality and optimism, was niftar in Brooklyn on Sunday morning at age 82.

In Stolin, Reb Meir was a legend. He was the life of the shul, the powerhouse that held the kehillah together. As the president of Yeshivah Karlin Stolin, the first chassidishe yeshivah in Boro Park, Reb Meir played a huge role in the development of the neighborhood. And as a confidant and friend of tens of Gedolim, Rebbes and Roshei Yeshivah, Reb Meir was the trusted emissary for countless projects, most of which will never be known.

“Such Meir’en [a play on his name and the Yiddish term for carrots] cannot be found in the fields,” the previous Boyaner Rebbe, Harav Mordechai Shlomo Friedman, zt”l, once said.

Reb Meir had an electrifying presence, whose magnetism and appeal filled a room of thousands. Memories of Reb Meir course through me as I prepare for the levayah.

Reb Meir was able to get a shul full of thousands of people dancing with the sheer force of his personality. His loud “anshuldigs!!!” across the hall stopped everyone in their tracks. His Stoliner davening at the top of his lungs. The sugar sweetness of his leining. He was the center of attention at all chasunos as he led the dancing and the simchas chassan v’kallah.

When he was honored a few years back by the Stoliner yeshivah, dozens of ads paid tribute to him as “Mr. Stolin.” Indeed, love of Stolin burned like a flame within him.

He was the one who personally arranged all the seudos in shul. He was the first to organize music for Lag BaOmer, a regular event in shuls across New York today. He was the first to have yeshivah boys wear white shirts on Rosh Chodesh, a practice adopted in most yeshivos today. And when he saw that nobody was doing kapparos on Erev Yom Kippur with chickens, it was Reb Meir who stepped forward and arranged for the first official kapparos center in New York — in his own backyard.

Reb Meir’s heart was as great as his expansive personality. For decades, his home on 16th Avenue and 46th Street was an open home for all comers. Tales abound of the utter disregard Reb Meir had for privacy in his own home.

A guest from Eretz Yisrael wanted to make a coffee early one morning. Directed to Reb Meir’s house, he let himself in, unaware that it was a private home, and poured his warm drink. In the middle of this, Reb Meir walked down the stairs. Seeing a stranger sitting at his table, he blurted out, “Perhaps you want some cake?”

When a guest at his home went back to Eretz Yisrael and repeated lashon hara about him, Reb Meir refused to respond or bear him any grudge. When that same person came back to the United States about a year later, Reb Meir ran over to him immediately to be the first to invite him to his home. (Shocked, the person agreed.)

Together with his twin brother Reb Yisroel, z”l, whose 10th yahrtzeit was marked last week, the Pilchick brothers traveled the globe several times a year, representing Stolin and raising funds for the yeshivah.

But the same Reb Meir who met with the highest echelons of South African and Eastern European societies had no problem spending an hour clearing the shul of all the sefarim.

“Whoever puts away the sefarim, siddurim and Chumashim will be helped with whatever he needs,” was a weekly refrain in Stoliner shul each Motzoei Shabbos — a call that was answered since people actually saw yeshuos. Dozens, if not hundreds, of people would call Reb Meir whenever they needed a brachah, confident that if Reb Meir promises, everything will be all right.

Born on 2 Adar, 1931, to his parents, Reb Nissan, the celebrated Stoliner chassid, and Fruma Pilchick, Reb Meir was the youngest of seven children, a twin to Reb Yisroel. The twins learned in Yeshivah Tomchei Temimim in Crown Heights while attaching themselves b’lev v’nefesh to the Rebbes of Stolin — Harav Yaakov Chaim who is buried in Detroit, Harav Yochonon who is buried in Tiveria and, yblc”t, the current Rebbe.

He married Rebbetzin Henya nee Schachter, who was devoted to the yeshivah and to her husband. When she passed away about 15 years ago, Reb Meir remarried to Mrs. Martha Margulis of London.

Reb Meir was niftar in Maimonides Medical Center on Sunday morning following a lengthy illness. The first of six levayos left the Stoliner yeshivah, then went to the Stoliner shul in Boro Park, then to JFK airport. All combined, hundreds participated in paying their last respects.

The aron was scheduled to fly to Eretz Yisrael Sunday night for levayos in front of the Stoliner shul in Givat Zev, in Yerushalayim, before heading to Tiveria for kevurah.

Shivah will be observed at 683 Dahill Road until Wednesday morning for women only, followed by 1607 46th Street for everyone until Friday afternoon.