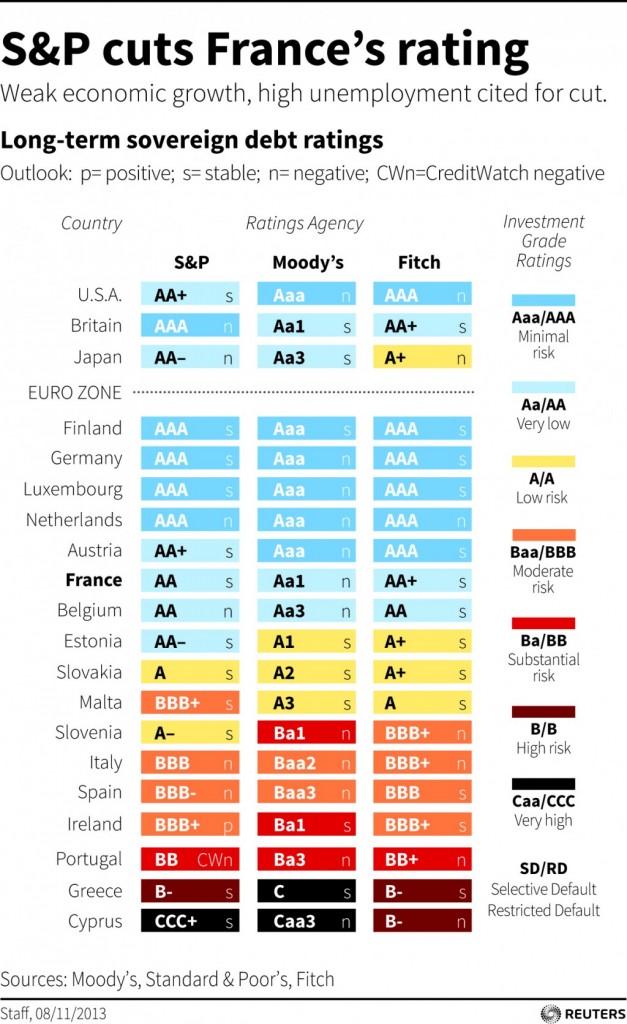 France’s principal credit rating was downgraded again Friday by Standard & Poor’s, which said the country has limited ability to get its public finances in shape and make its economy more competitive.

The agency lowered France’s long-term foreign and local currency sovereign credit ratings one notch, to AA from AA+. However, the outlook for the rating is “stable,” meaning no further changes are expected in the near term.

Since taking office in 2012, President Francois Hollande has passed some economic reforms, such as making the labor market more flexible and changing the pension system, but many economists say the changes are too incremental to improve the situation.

S&P said those reforms would likely be “insufficient to significantly unlock France’s economic growth potential.” France recently saw a small rebound in growth after months of stagnation, but real sustained growth is expected to be slow in returning.

And the ratings agency added that high unemployment — it is currently 11.1 percent — will make more reforms nearly impossible.

Without reforms, it can be difficult to significantly reduce spending, and S&P said France has already maxed out its ability to raise taxes. That means the government will also struggle to improve its public finances, even more so as the agency expects French unemployment to remain above 10 percent until 2016.

“The overall effect appears to us to leave France with less economic flexibility than other highly rated eurozone members,” the agency said.

The market reaction to the downgrade in bond markets was fairly muted, with the country’s 10-year bond up a bare 0.02 percentage points at 2.18 percent — still a historically low rate.

That may be because repeated downgrades have taken the sting out. S&P was the first agency to strip France of its top AAA rating last year. The other two major ratings agencies, Moody’s and Fitch, have since followed suit.

French finance minister Pierre Moscovici said he regretted S&P’s decision, but emphasized that France’s credit rating remained among the highest in the European Union and the world.

“I deplore certain judgments that, I think, are inexact criticisms,” Moscovici told France Info radio. “They underestimate the ability of France to transform itself, to right itself.”