Tom Kean Jr. has survived an attempt to dump him as minority leader in the New Jersey Senate after he failed to deliver a single Republican upset despite GOP Gov. Chris Christie’s landslide re-election win.

A majority of the state’s Republican senators on Thursday voted for Kean, the son of former Gov. Tom Kean Sr., to remain as minority leader for two years. Following Tuesday’s elections, Democrats control the Senate with the same 24 votes, compared with 16 for the Republicans.

In the Assembly, Democrats voted unanimously to switch leaders Thursday when they decided Vincent Prieto of Hudson County would succeed Sheila Oliver of Essex County as of Jan. 14. The change had been anticipated for weeks.

The vote to retain Kean came after a push by Democratic Senate President Steve Sweeney and Christie to replace him. An ongoing feud between Sweeney and Kean grew more intense as Kean suggested that Christie’s coattails would help the party win control of the Senate then spent money in Sweeney’s district to back his opponent.

Though Sweeney didn’t get the new GOP leader he called for, he seemed satisfied afterward. 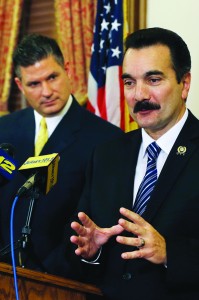 “I could ask for no better minority leader than the one whose own strategy cemented their place as the minority party in this state,” he said in a statement after the vote.

Christie, who won by 22 points in this Democratic-leaning state, steered clear of the leadership fight publicly. But he spent a few hours Thursday meeting privately with individual Republican senators, including two sessions with Kean. Christie preferred that the post go to his ally, Sen. Kevin O’Toole.

Other leadership positions will not change. Sweeney will remain as Senate president and Jon Bramnick as Assembly Republican leader.

Assembly seats in the 2nd and 38th districts were still being decided Thursday because of close votes. Republican Peter Inverso, who lost to Democratic Sen. Linda Greenstein in District 14, may ask for a recount.

This article appeared in print on page 5 of the November 8th, 2013 edition of Hamodia.