Heart-clogging trans fats were once a staple of the American diet, plentiful in baked goods, microwave popcorn and fried foods. Now, mindful of the health risks, the Food and Drug Administration is getting rid of what’s left of them for good.

Condemning artificial trans fats as a threat to public health, the FDA announced Thursday it will require the food industry to phase them out.

Manufacturers already have eliminated many trans fats, responding to criticism from the medical community and to local laws, Even so, the FDA said getting rid of the rest — the average American still eats around a gram of trans fat a day — could prevent 20,000 heart attacks and 7,000 deaths each year.

It won’t happen right away. The agency will collect comments for two months before determining a phase-out timetable. Different foods may have different schedules, depending on how easy it is to find substitutes.

“We want to do it in a way that doesn’t unduly disrupt markets,” said Michael Taylor, the FDA’s deputy commissioner for foods. Still, he says, the food “industry has demonstrated that it is, by and large, feasible to do.”

Indeed, so much has already changed that most people won’t notice much difference, if any, in food they get at groceries or restaurants.

Scientists say there are no health benefits to trans fats. And they can raise levels of “bad” cholesterol, increasing the risk of heart disease, the leading cause of death in the United States. Trans fats are widely considered the worst kind for your heart, even worse than saturated fats, which can also contribute to heart disease. 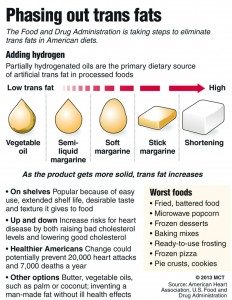 Trans fats are used both in processed foods and in restaurants, often to improve the texture, shelf life or flavor of foods. Though they have been removed from many items, the fats are still found in some baked goods such as pie crusts and biscuits and in ready-to-eat frostings that use the more solid fats to keep consistency.

They are also sometimes used by restaurants for frying. Many larger chains have phased them out, but smaller restaurants may still get food containing trans fats from suppliers.

How can the government get rid of them? The FDA said it has made a preliminary determination that trans fats no longer fall in the agency’s “generally recognized as safe” category, which covers thousands of additives that manufacturers can add to foods without FDA review. Once trans fats are off the list, anyone who wants to use them would have to petition the agency for a regulation allowing it, and that would likely not be approved.

The fats are created when hydrogen is added to vegetable oil to make it more solid, which is why they are often called partially hydrogenated oils. The FDA is not targeting small amounts of trans fats that occur naturally in some meat and dairy products because they would be too difficult to remove and aren’t considered a major public health threat on their own.

Many companies have already phased out trans fats, prompted by new nutrition labels introduced by the FDA in 2006 that list trans fats and by an increasing number of local laws, like one in New York City, that have banned them. In 2011, Wal-Mart pledged to remove all artificial trans fats from the foods the company sells by 2016. Recent school lunch guidelines prevent them from being served in cafeterias.

In a statement, New York City Mayor Michael Bloomberg said it was his city’s 2008 ban that led to much of the change. “Our prohibition on trans fats was one of many bold public health measures that faced fierce initial criticism, only to gain widespread acceptance and support,” he said.

But support is far from universal. A nationwide poll conducted by the Pew Research Center between Oct. 30 and Nov. 6 said that of the 996 adults surveyed, 44 percent were in favor of prohibiting restaurants from using trans fats while 52 percent opposed the idea.

Still, Americans are eating much less of the fat. According to the FDA, trans fat intake among Americans declined from 4.6 grams per day in 2003 to around one gram in 2012.

Agency officials say they have been working on trans fat issues for around 15 years and have been collecting data to justify a possible phase-out since just after President Barack Obama came into office in 2009.

This article appeared in print on page 1 of the November 8th, 2013 edition of Hamodia.